Very few studios excel when it comes to “event movies” like Disney owned Marvel Studios. What started with Iron Man in 2008 grew into an extended franchise over 11 years, encompassing several comic book superheroes including Captain America, Thor and The Hulk. In 2012, with just 5 movies under their belt, they brought successfully together their team of heroes for The Avengers, their first major event. While the feat was repeated in Age of Ultron, just 5 movies later, it wasn’t quite as special until Captain America Civil War (which should’ve just as well been called Avengers 3) when all the heroes turned against each other, with a few more added to the mix (AntMan, Black Panther, and Spider-Man, included). As the Marvel Cubematic Universe grew bigger, so did fan’s expectations and the event movies kept growing. This culminated in a 2 part “finale” of the previous 20 films with the mega-event movies Infinity War it’s follow up Endgame which sewed up the previous 20+ films and included 36 well-loved characters engaged in an epic battle to save the universe. 2019’s Endgame was arguably the greatest event in cinematic history, claiming the title of all time highest box office earner. Naturally, Marvel was encouraged to continue and create another epic saga; of which we are still in the early stages of. But that’s no reason we need to wait for another epic movie during the build up!

Spider-Man’s cinematic history predates the MCU by a few years, beginning in 2002 with the trilogy starring Tobey Maguire (all directed by Sam Raimi). A second duo of movies, under the Amazing Spider-Man banner, starred Andrew Garfield in the title role (both directed by the aptly named Marc Webb), co-existed with the early years of the MCU, however due to legal rights and studio politics they were completely separate entities. Eventually, in 2016, Sony and Disney owned Marvel Studios worked things out to play nice, and fans were treated to Tom Holland as the web-slinging teenager, briefly, in Civil War. Aside from his very memorable participation in Infinity War and Endgame, this take on Spider-Man was given his own series of fan pleasing films – Homecoming and Far From Home, with the latest No Way Home being both the most epic Spider-Man movie and a contender for the title of most epic of the MCU.

2018’s animated eye candy Into The Spider-Verse introduced movie audiences to the idea that multiple variants of these characters exist, in separate universes and posits the question, ‘What if these multiple universes could overlap, making ‘The Multiverse’.

Spider-Man No Way Home draws a little bit from all these movies, finding a way to tie in those early ‘non-canon’ movies.

Continuing directly after the second of his trilogy, director John Watts begins No Way Home with Spider-Man’s true identity – teenage Peter Parker – being exposed to the world. In turn, this leads to upending not only young Peter’s life, but also those of all his friends and family. Feeling both guilt and frustration over this turn of events, Peter seeks the aid of Doctor Strange (Benedict Cumberbatch), a powerful wizard and master of the mystic arts. Strange agrees to cast a spell over the whole world that will make people forget that Peter is Spider-Man, however when the young teen keeps making changes and requests mid-spell, Strange’s spell becomes chaotic; leading not to people forgetting the superhero’s secret identity, but instead ripping open holes through the multiple universes that attracts anybody who knows “Peter Parker is Spider-Man”. Unfortunately, for our Peter, the ones who start coming across are fan-favorite villains from the previous movies. 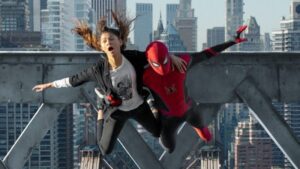 All portrayed by their original actors (and aided by some convincing CGI to shave 10-20 years off of their looks), fans are treated to the return of legends Willem Dafoe (Norman Osborne/Green Goblin), Alfred Molina (Doctor Octopus), and Thomas Hayden Church (Sandman) from the Tobey trilogy, while Rhys Ifans (The Lizard) and Jamie Foxx (Electro) return to their villainous roles from the Andrew era.  However, before our friendly neighborhood Spider-Man can deal with them, first he must battle his former Infinity War teammate, Doctor Strange, who wants to send the villains back to their worlds, which would mean their imminent deaths; Peter believes he can save and cure them all. In a movie full of beloved characters and exciting action sequences, this was hands down my favorite part, as Strange takes them into the mirror dimension; a trippy eye visual best described as an MC Escher fever dream.

Aided by his best friend Ned (Jacob Batalon) and girlfriend MJ (Zendaya) – plus a few others from the across universes/past franchises – Peter is determined to save the day and his universe at any cost.

When it comes down to it, Spider-Man: No Way Home is a lot of fun and gives audiences everything they want… unless you’re me, I guess. Of the 9 cinematic movies we’ve had of Spider-Man (not counting his roles in other movies), I’m happy to call this the third best – behind predecessor Far From Home, with Into The Spider-Verse being tops.

Frankly, by giving audiences what they’ve clamored for, I spent a good chunk of the movie feeling pandered to; as if every scene was saying, “Hey, remember this? Hey remember this?” throughout, while failing to build bigger on those ideas. Whereas Into The Spider-Verse relied solely on you knowing just the basics of Spider-Man while introducing several new characters to the screen, No Way Home just rehashes what we’ve already known. Even when characters discuss other villains that didn’t make it across, it’s one’s we previously saw in the other movies. No mention of other iconic villains… A huge, missed opportunity if I saw one; instead of name-dropping characters that would make longtime Spidey fans salivate to see, while intriguing the more casual fan, I was left thinking that after the 2 previous series ended the characters just swung by a web in limbo; not doing anything at all.

Amidst the action and comedy, there’s 2 scenes that will bring emotion; one surprisingly worked for me much better than the other.

Ultimately, this movie confirms for me that in the end, Tom Holland is definitely my ideal Peter “Spider-Man” Parker; capturing both Peter’s awkward nerd side and blending it well with Spidey’s quippy charm (the previous actors excelled at capturing one side or the other, never perfectly blending both). 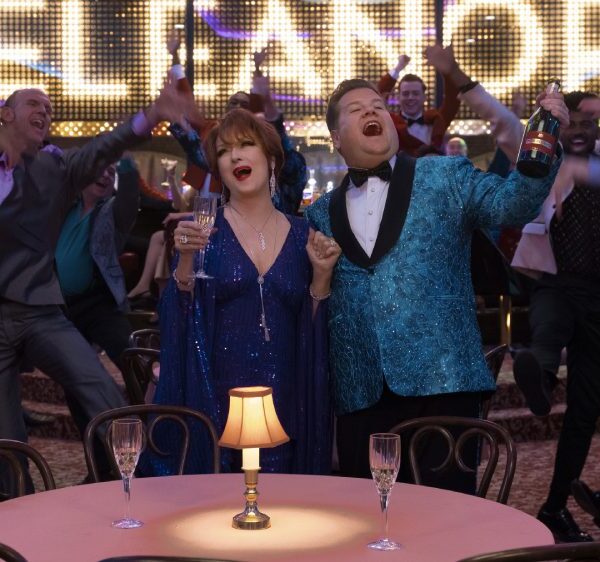