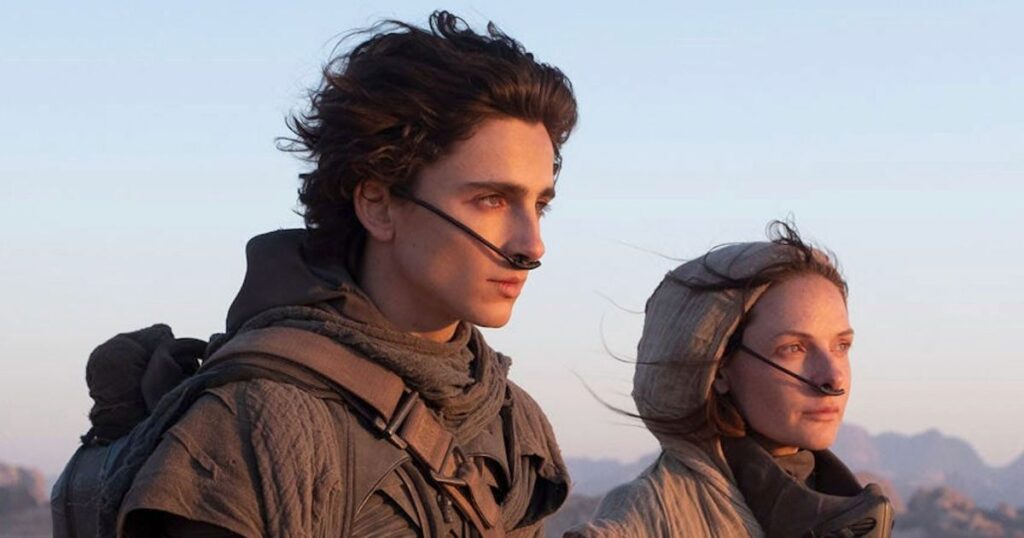 First of all, thank you to the programmers at TIFF for grabbing Dune as a screening work. In doing so, they landed one of the years most anticipated films as they did a couple of years back with Joker (2019) and A Star is Born (2018). Well done, folks!!

“This is only the beginning” is the last line uttered in Dune, making clear there is more to come, though the opening title credit “Dune Part One” had already delivered that message. The spectacular film will need spectacular grosses at the box office if a sequel is to be done, unless the director and producers made the two films together as Peter Jackson did with Lord of the Rings trilogy (2001-02-03).

If any recent work was meant for the big screen, it is Denis Villeneuve’s mostly magnificent adaptation of Dune, both a remake of the 1984 film by David Lynch, and a fresh adaptation of the science fiction classic from author Frank Hebert. Though the French-Canadian Villeneuve is best known for his intimate humanist dramas, he has fast become the go-to director of huge science fiction films in Hollywood, guiding Arrival (2016), Blade Runner 2049 (2017) and now this stunning film. To his credit the humanity in his film remains intact no matter how large the canvas, as demonstrated by the luminous Amy Adams’ performance in Arrival.

Villeneuve directed the extraordinary Polytechnique (2009), a superb black-and-white film about the massacre of 14 women at a Montreal college, told in a manner that brought startling realism and heartbreak to the film. The film was awarded nine Genies (Canada’s Oscar for a time) and put the director on the map of outstanding young directors on the rise. His remarkable Incendies (2011) was an Oscar nominee for Best Foreign Language film, before he headed to Hollywood to direct the violent and shocking Prisoners (2013) with Hugh Jackman and Jake Gyllenhaal. Now proven as a filmmaker, he began his meteoric rise to A-list filmmaker. The electrifying cartel film Sicario (2015) followed, earning the director the finest reviews of his career up to that time. 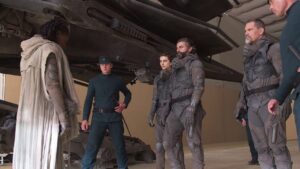 With Dune, he has done something no one thought possible—bringing the massive book to life, with big-screen visuals without sacrificing performance. Is it perfect? No, of course not, but considering the source, that dense novel, Villeneuve performed admirably. Dune is very near a masterpiece, but the clunky narrative costs the film some marks.

Both majestic and dark, there were sequences that left me in awe in the same way Apocalypse Now (1979) did. You cannot quite believe what you are seeing. But don’t for a minute think I am not suggesting the film ranks alongside Coppola’s war epic. Oh no, shake your head.

The worlds look vast, worn, battered, as do the characters. Nothing gleams as it does in the Star Wars films. Lives have been, lives lost, all in defending the precious spice, which has the power to extend life and facilitate space travel. Death is common and frequent in this world.  I am not going to get into the narrative here, it is too massive. Suffice to say that the spice is coveted by those who will kill for it, and the Atreides family will defend it to the death if necessary. The Duke (Oscar Isaac) leads the family, with the knowledge of the future and the part his gifted son Paul (Timothee Chalamet) will play preserving the desert planet and the spice. The problem, is to get to the spice, they must make war with another family, a particularly nasty bunch.

We watch young Paul become a warrior, discovering his unique gifts and talents, which will aid him in his quest. For more than 80 years, the desert planet Arrakis has been ruled unfairly by the vicious House Harkonnen, a tribe that enjoys war. The Emperor has ordered the Harkonnens to leave the planet and turn it over to the Atreides, but it is a trap. The Atreides clan and their massive army are being set up.War is launched.

The impressive cast helps to propel the often awkward plot. Best of all is Stellan Skarsgard as the vicious Baron Harkonnen, a floating maniac with deep homicidal tendencies, a man who feeds on the pain of others for breakfast. Young Chalamet continues to do impressive work, reminding audiences why he was a Best Actor nominee a couple of years ago for the sublime Call Me By Your Name (2017). And Oscar Issac has become one of the most watchable actors working today, far superior here to what we saw from him in the Star Wars films. Beefy actors Jason Mamoa and Davd Bautista are both strong, and Rebecca Ferguson is impressive as Paul’s mother, possessed with gifts of telepathy.

I hope the film does well with audiences, and I expect it to do very well come Oscar time, at least with craft nominations. The cinematography is glorious, the production design, visual effects, sound and costume design all superb. The massive sand worms are a sight to behold, far more impressive than the 1984 creature. Computer generation has permitted miracles to take place on the screen. An entire new universe has been created in Dune and it is something to behold. See it on the big screen. It is wonderous, if a tad ponderous.

PODCAST #024 – THE WORST MOVIES EVER MADE