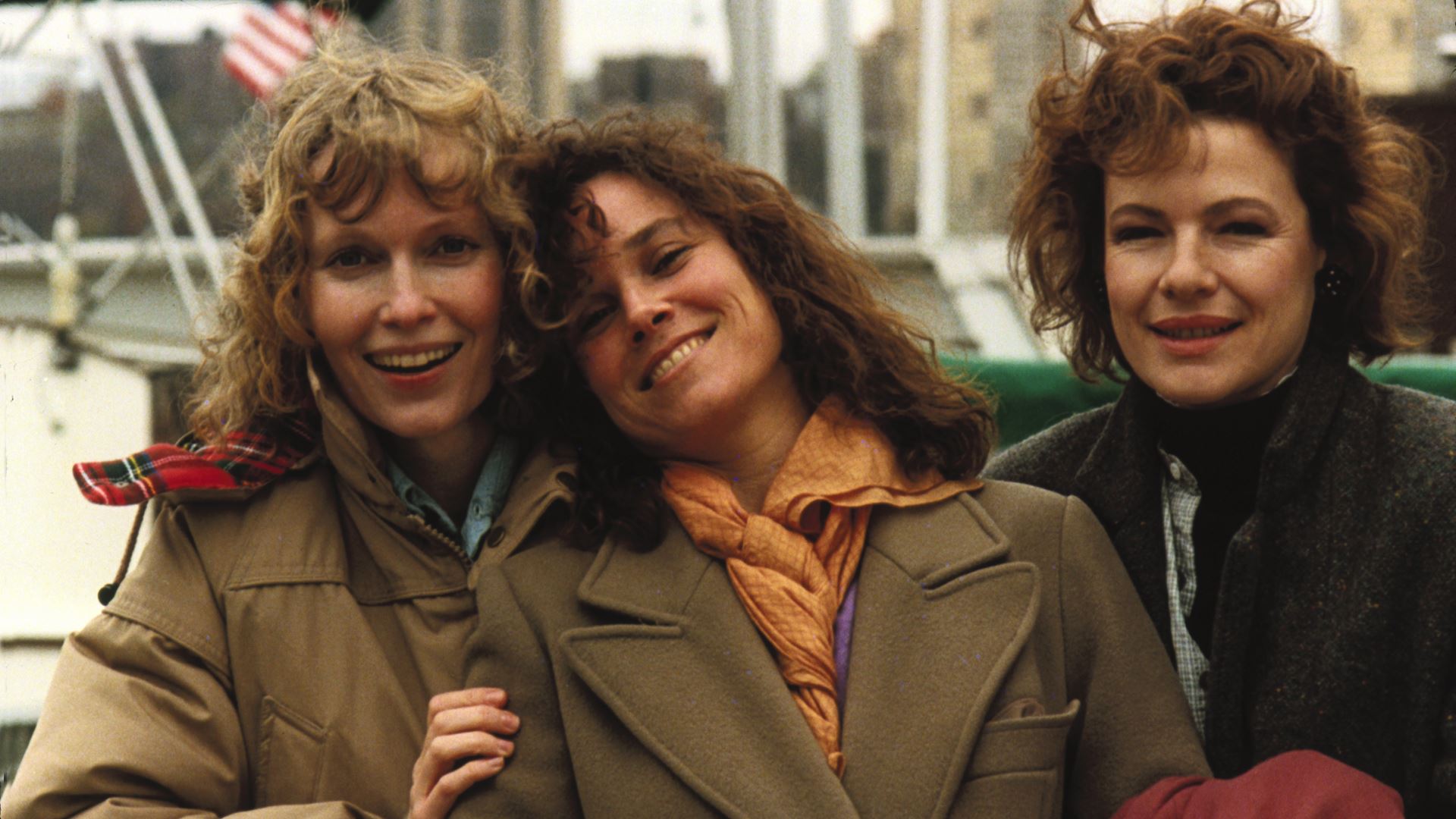 “I should stop ruining my life searching for the answers I’m never gonna get.” – Mickey, Hannah and Her Sisters 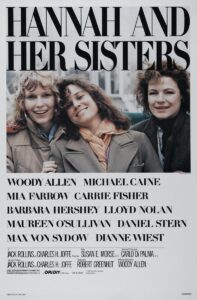 From the opening credits there is a bounce in Hannah and Her Sisters, an energy that causes the film to hum. We watch delighted at the twisting and turning events of the characters, never quite sure what is coming next, but sure we will be surprised. Loosely, very loosely, based on Chekov’s The Three Sisters, the film studies the relationships of three very different sisters and their men, as well as the men who are in love with them, to whom they are not necessarily married.

Orbiting their universe is Mickey (Woody Allen), a TV writer who was once married to one of the sisters, the eldest, Hannah (Mia Farrow), and the most levelheaded and accomplished of the trio. Next is Holly (Dianne Wiest) still struggling to get a handle on her addictions to cocaine, and then Lee (Barbra Hershey),  an alcoholic involved with an angry artist, Frederick, portrayed with intense fury by Max Von Sydow.

Time is measured in the film by the massive Thanksgiving dinners that take place at the home of Hannah and her husband Elliot. In the two years between the dinner that opens the film and that which closes it, so much takes place, it will have your head spinning.

Woody Allen by 1986 was among the most acclaimed, gifted director-writers working in modern cinema. He had broken through in the early seventies with his very funny comedic films before making Annie Hall (1977), a groundbreaking comedy that added a fourth rule to the three standard rules of Hollywood comedies. Until Annie Hall, they had been “boy meets girl, boy loses girl, boy gets girl back”, Allen adding a third rule to the genre, “Boy loses girl forever.” That fourth rule made the genre more serious, deeper, and much more realistic. Having based the film Annie Hall on the relationship between he and Diane Keaton, Allen courageously placed his life on display which all great writers have done. Casting Keaton in her Oscar winning role was a stroke of genius, but no one accused Allen of being less than a genius. So many great films over his life time – Annie Hall (1977), Interiors (1978), Manhattan (1979), Stardust Memories (1980), Broadway Danny Rose (1984), The Purple Rose of Cairo (1985), this, Bullets Over Broadway (1994), Sweet and Lowdown (1999), Match Point (2005), Vicky Cristine Barcelona (2008), Midnight in Paris (2011) and the recent A Rainy Day in New York (2020) represent a staggering output of great films, and averaging a film per year since 1977, there are even more that are very good.

It is not often recognized how fine an actor Woody Allen can be, such as he was in Annie Hall, Manhattan and here. He brings different shadings to his characters because, as Chaplin portrayed The Little Tramp from film to film, so does Allen portray variations on the intelligent though neurotic New York artist raised in the Jewish persuasion. He gave each character something unique, something that made them different, and when other actors began playing the Allen role, very few could match what he did on screen, no one had the delivery he did. John Cusack came close to inhabiting the soul of the Allen role in Bullets Over Broadway but Kenneth Branagh was embarrassing in Celebrity. Once Allen stopped acting in his roles, something was missing, though his films were still often tremendously great. This might have been his last great screen performance. He begins the film a paranoid hypochondriac, and this time his doctor thinks something might be wrong, leaving Mickey to believe death is looming. He searches out all religions looking for answers, and finally gets the news there is nothing wrong with him at all. At first delighted he is going to live, but then he thinks about it, why is he happy? What does he have to live for? He finds out and it is the loveliest surprise of the film.

Elliott (Michael Caine) is married to Hannah (Mia Farrow) but believes he is love with Lee (Barbra Hershey), a recovering alcoholic trying to piece her life together. Holly (Dianne Wiest) is a recovering cocaine addict, hoping to start a catering business to work at in between acting jobs but is not sure she likes her partner enough, April (Carrie Fisher), a self-centered, selfish actress. In flashbacks we see a date arranged by Hannah with her ex-husband Mickey and her sister Holly, high as a kite the entire evening, caustic, and raging. The date is a complete disaster, but they will encounter one another once again in the not too distant future. Meanwhile Elliott makes his feelings known to Lee, who on the verge of leaving the angry tortured artist Frederick, responds and they spend many afternoons in hotel rooms across the city. Lee leaves Frederick, escapes is more like it, and she and Elliott seem made for one another.

Holly encounters Mickey, (Hannah’s ex) in a record store one night and they begin talking, connecting. She asks him to read a script she wrote, but he does one better, he comes to her apartment, and listens politely as she reads it to him, and loves it! Delighted Holly ends up spending more and more time with Mickey, and we can see them falling in love. We have already seen the breakdown of the marriage between Mickey and Hannah, and while they have remained friends, Mickey has always resented her a little.

As they gather for another Thanksgiving dinner, we see that Elliott and Lee have ended their affair, he realizing Hannah was a wonderful wife, and he was hurting her thinking differently. Lee meanwhile has married, a young college professor she met while back at school. Holly arrives late, and as she primps in the mirror, Mickey comes around the corner, they too are now man and wife. But Holly has a great surprise for him – she is pregnant, and he was previously told he was he would never be able to father a child. “The heart is a resilient muscle he muses” as they kiss, more in love than either has ever been.

The film deals with, in no particular order, death (that never comes), religion, philosophy, infidelity, poetry, success and failure, drug addiction, and most prominently, family. Not for a second is a single character deep in self-pity, they move on, they hope, and the film ends beautifully in hope. We are told Allen’s Mickey cannot father children, yet Holly is pregnant by Mickey, leaving both overjoyed and more in love with one another than ever. Allen’s fourth component to the romantic comedy, “man loses woman forever” is not seen here, other than Elliott’s affair with Lee, which we knew was fleeting anyway. But as most mainstream Hollywood love stories ring false, Hannah and Her Sisters remains true, a deeply honest and soulful film, filled with love and good will.

Superbly acted by all, clearly the standout was Wiest as Holly, trying hard to stay off cocaine, her lovely, squinty eyes smile hiding the pain she feels. We see her via flashback during her cocaine years and she is a different person, aggressive, blunt, hurtful just a nightmare of a human being. Yet meeting Mickey again, we can see very quickly they are made for one another, they were meant to be together. The change we see in Holly once with Mickey is beautiful, she possesses more confidence because she has love in her life, and as Allen has always known, being loved, being in love, makes one so much more self-assured.

Wiest emerged in a small little seen film entitled Independence Day as a doomed battered wife, but one with the courage to map out her destiny and take the monster who beats her. She would move on to be one of the greatest actresses of her generation, usually in supporting role, but an astonishing talent.

Allen has never been better than he was here as Mickey, hell bent on killing himself but when he nearly does, he is done with that idea, believing there is something and someone out there for him. Hannah had once loved him, surely there could be another. He slips under the skin of the character and as always brings something fresh, something new to his work.

Michael Caine took the role Allen had written for Jack Nicholson when the great Nicholson was unavailable shooting Prizzi’s Honor (1985). Caine was perfect, lighter than air, we can almost see him swooning as he describes, and very much in love with Lee, or so he thinks. His true love is always going to be Hannah, and he eventually knows it, hurting only himself.

Though I have never been much of a Barbra Hershey fan, this is without question her best work, she is superb as the youngest sister who battled with alcohol years before. She has a lovely combative chemistry with Max Von Sydow as the dark Frederick, which makes her scenes with Elliott seems so much lighter, happier.

And Farrow, wonderful as Hannah, happy to loan her sister Holly money, never worrying about being paid back, a born mother and it seems good at everything she does. So why does Elliott question her love for him? Is there something she does not do well? Apparently.

Carrie Fisher, Maureen O’Sullivan (wonderful as an old boozer), Lloyd Nolan and Sam Waterston are excellent in smaller roles, rounding out a superb ensemble of actors. Max Von Sydow has a couple of glorious scenes as Frederick, Lee’s angry old man lover, while Daniel Stern is terrific as a rock star looking to buy paintings and drawings from Frederick.

For the most part the film was shot in Farrow’s very own apartment, with her brood of adopted children wandering in and out of frame.

There is more energy in Hannah and Her Sisters than in any of Allen’s films with the exception of the wonderful farce Bullets Over Broadway, one of his finest and underrated films, easily his finest of the nineties, just as this was his greatest of the eighties.

Hannah and Her Sisters remains one of his finest and most enduring films, warm, wise, and wonderful. It seems to glow from within and has that vibe, the bouncy, jaunty vibe to it that grabs us right away. Perfection.

Allen is now 85, and still directing and writing at least one film a year. May he be immortal in life as he is on film. 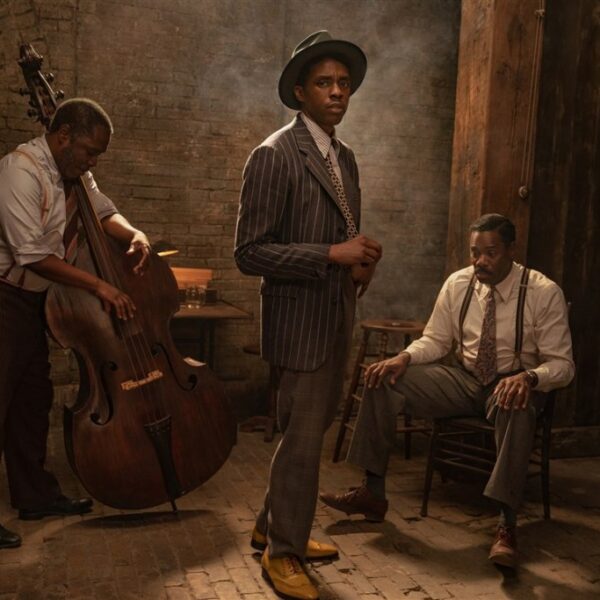