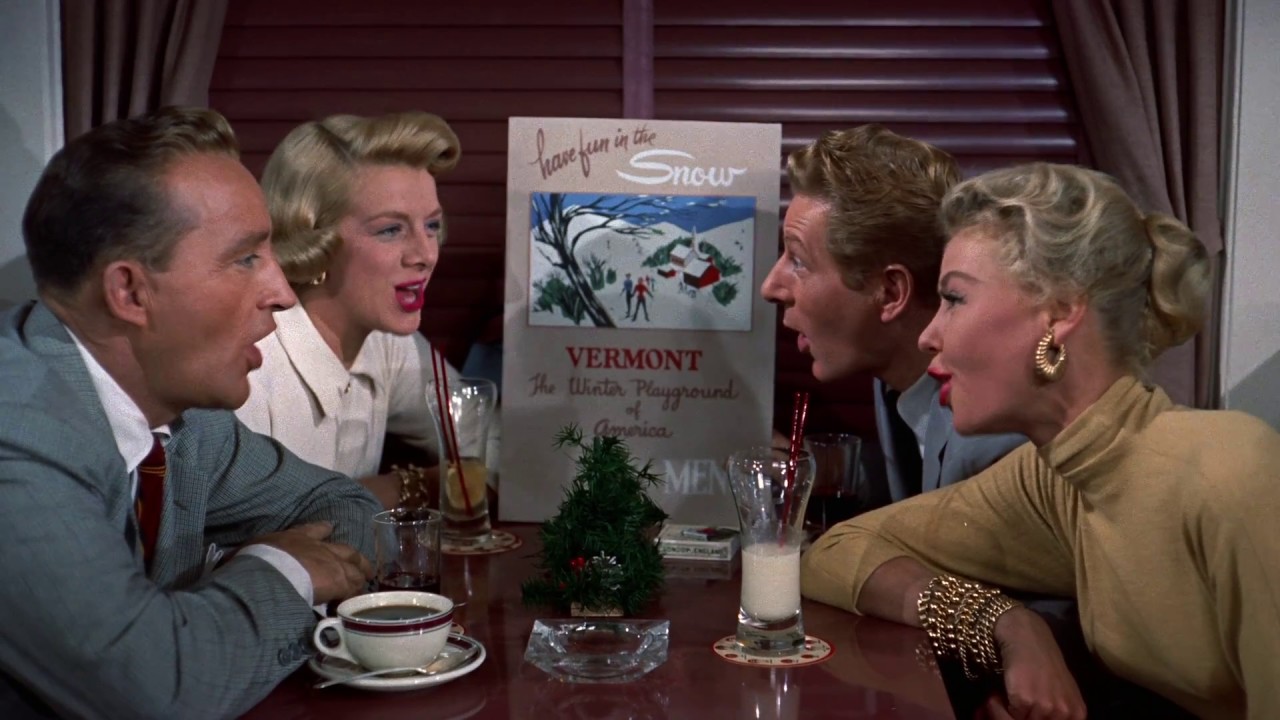 By the time December 26 rolls around I’m usually sick of Christmas music and can’t wait until radio stations go back to their regular programming. And if I’m walking through a mall or a department store in early November and start hearing an instrumental version of “Jingle Bells” I cringe. When was it decided that the day after Halloween was an automatic fast forward to yuletide tunes?

But once December hits, I’m all in for holiday music and I’ll start pulling together a Christmas mix or two to play throughout the month. I will grudgingly admit there is something comforting about hearing traditional songs by artists old and new; there is a pleasant feeling that comes from the nostalgic buzz of those well-worn melodies and lyrics. And every once in a while, a new song comes along that works its way into the playlist – it’s not often, but it happens.

Growing up, by the time December rolled around Christmas music was all over the radio, it was part of the movies that were shown annually, and it was also a television staple with the slate of Christmas variety programs that would show up on television right after American Thanksgiving. Whether it was Bing Crosby’s annual special or specials lead by Julie Andrews, Andy Williams, Dolly Parton, or Anne Murray – these shows and the music were a staple (I’m Canadian so Anne Murray and Christmas music are synonymous for me). There were also the animated Christmas specials from the mid-sixties that are aired each year – all mini-musicals that have given us more than a few Christmas songs that have become an entrenched part of the festive music repertoire.

In the spirit of the season, these are 10 Christmas favourites (well, my favourites) that originated in movies or TV:

The acknowledged pinnacle of Christmas tunes and the Oscar-winning best song that year. This Irving Berlin composition was introduced by Bing Crosby and Marjorie Reynolds for the first time in Holiday Inn, a classic musical with Fred Astaire that used American holidays as the jumping point for a series of holiday themed songs and production numbers. Crosby’s recording of “White Christmas” was one of the biggest selling records of all time and it has been covered by virtually every major singer who has released an album of Christmas music, but Crosby’s version is definitive.

The other big Irving Berlin Christmas tune from Holiday Inn is a buoyant, celebratory welcome to the holidays. “Happy Holiday” (also sometimes referred to as “Happy Holidays”) isn’t in the same league as “White Christmas” but it still serves as a rousing call to friends and family to get in the holiday spirit. Again, it has also been covered by hundreds of singers in various arrangements, but it works best as a straight on, up tempo Christmas welcome. Andy Williams did a great, energetic version of this song, pairing it with Kay Thompson’s “The Holiday Season”, on his 1963 “The Andy Williams Christmas Album”.

“Have Yourself a Merry Little Christmas” from Meet Me in St. Louis (1944)

This is probably the darkest Christmas song on the list, sung by Judy Garland to a devastated Margaret O’Brien as the family prepares for their last Christmas in their beloved St. Louis. It’s a song about change and longing, but through the years the darkness has been tempered as various recordings and arrangements have given it more of an easy listening feel. It’s one of the great movie songs of the decade, but surprisingly wasn’t nominated for an Oscar that year (although “The Trolley Song” from the same film did deservedly make the list). Like Crosby with “White Christmas”, Garland’s version of “Have Yourself a Merry Little Christmas” is definitive, but Barbra Streisand also does a wonderful version on 1967’s “A Christmas Album”

Frank Loesser’s sexy (and more recently controversial) Oscar winning song from the Esther Williams extravaganza Neptune’s Daughter is one of those songs that was never intended to be a holiday tune, but the winter-tinged lyrics helped it morph into one. Like others on the list it has become a standard and recorded by dozens of singers. It’s a playful duet between two people – one on the prowl (usually the male singer) and one uncertain of having “another drink more” (usually the female singer). In the film it’s played for comedy, but on record it’s usually much more sensual. My favorite is a version recorded by Ann-Margret and Al Hirt from 1964.

The Lemon Drop Kid was another pairing of Bob Hope with a story by Damon Runyon. Hope and Lucille Ball had a major hit with Sorrowful Jones in 1949, based on Runyon’s “Little Miss Marker”. The Lemon Drop Kid isn’t quite on the same level but part way into the film Bob Hope and co-star Marilyn Maxwell create a bit of movie magic as they start singing “Silver Bells” while walking down a New York street at Christmas, bumping into some street corner “Santas” who join in. Doris Day does a beautiful version of the song on 1964’s “The Doris Day Christmas Album.”

When Paramount decided to leverage the now-classic song “White Christmas” as a film title and include two versions of the song – one to open the film and one to wrap it up – there was little doubt they would have a hit on their hands. They also enlisted Bing Crosby to star, supported by Rosemary Clooney, Danny Kaye and Vera-Ellen, and a trunk full of old and new Irving Berlin tunes. One of the original songs for the film was “Snow”, a simple tune extolling the virtues of the white stuff, sung by the four principals on a train as they travel to Vermont. With the simplest of settings, the song, the performances, and the staging combined to make a classic scene and song. Seth MacFarlane (of all people) does a great version of this on his “Holiday for Swing” album from 2014.

“A Holly Jolly Christmas” from Rudolph the Red Nosed Reindeer (1964) 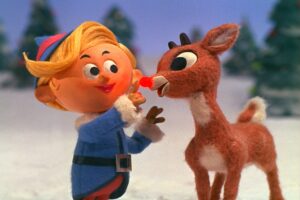 For a period in the mid to late sixties animated TV specials drew big audiences and became perennial favourites around the holidays. Rudolph the Red Nosed Reindeer was the first. It leveraged both the 1939 short story and the hit song recorded by Gene Autry in 1949 to tell the story of Rudolph and his friends. The program made good use of the title tune, but there were several other very good songs by Johnny Marks. “Holly Jolly Christmas” was the best, and it proved to be a Christmas staple for Burl Ives (who also served as the narrator for the TV production). The song is still popular and Dolly Parton used it to kick-off her 2020 album of Christmas music titled “A Holly Dolly Christmas”.

“Christmas Time is Here” from A Charlie Brown Christmas (1965) 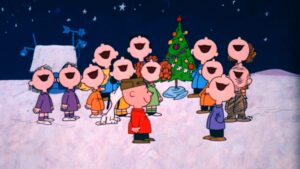 This classic Charlie Brown outing is probably my favourite Christmas special, and one of the reasons for that is the jazz inflected music of Vince Guaraldi – both original songs and new arrangements of some traditional pieces. A Charlie Brown Christmas has a great message about the true meaning of the season and the music throughout is an immediate, warmly familiar, almost romantic paean to Christmas. “Christmas Time is Here” is the star of the excellent soundtrack, a wonderfully relaxed and almost dreamy song and arrangement. It’s been recorded by a number of jazz and pop artists over the years – Rosemary Clooney, Mel Torme, Diana Krall to name a few –  with Barry Manilow’s version from 2009’s “In the Swing of Christmas” my personal favourite. 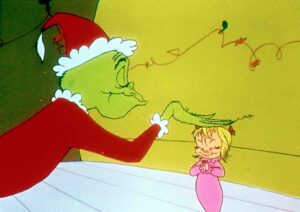 There’s a lot of love for this adaptation of the Dr. Seuss story – the witty screenplay, Boris Karloff’s vocal talents as both the narrator and the Grinch, and the fun music by Dr. Seuss and Albert Hague. “You’re a Mean One, Mr. Grinch” is probably the least “Christmassy” song on the list, but the lyrics and melody still have a fun, nostalgic feel after hearing just the first few bars. Although not recorded as often as some of the others on the list, k.d. Lang did a beautifully smokey version on “Glee: The Christmas Album”, a collection of songs from the TV series released in 2010. 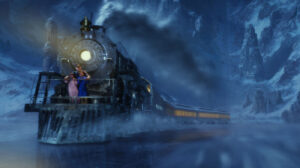 This is the most recent song on the list and it definitely hits the upper levels of the schmaltz meter, but Josh Groban’s recording “Believe” turned out to be a nice way to wrap things up at the end of The Polar Express. This one took a few viewings before I turned into a fan – I initially found it a little dark, and some of the animation a little off-putting – but it’s parallel messages of believing and friendship eventually hit home. As did the theme song.