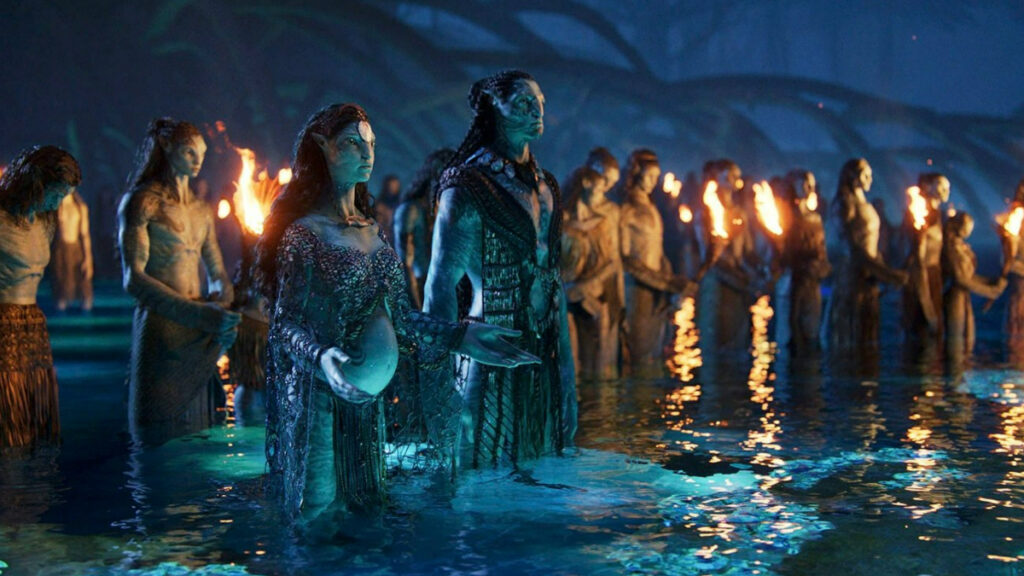 Couple quick reminders. Given it has been more than a decade since Avatar (2009), here is a very brief refresher.

Pandora is a planet of great exotic beauty inhabited by nine-foot tall, blue creatures called the Na’vi who do not appreciate man on their home. Man is there to mine the planet and clear forests for humans to inhabit later. Jake Scully (Sam Worthington) was a soldier with paralyzed legs and offered a chance to walk again if he helped the military. He allows himself to be transported into the body of an Avatar Na’vi to permit him to become one of them. He falls in love with one of them, and rather than return to the vile military, he joins forces with Nav’vi becoming one of them and one with the planet.

Movie miracles still happen and Avatar – The Way of Water, the long awaited sequel to the highest money maker, is finally with us, It’s a miraculous film leaving one thoroughly entertained and in awe.

Though I cannot claim to be a fan of the work of director James Cameron, neither can I deny as a film director he is an absolute visionary who has given audiences images we could only have dreamed of seeing. Cameron might struggle with narrative in his writing but certainly not the visual element of his films, which have always been remarkable. I emerged from Avatar (2009) stunned by the visuals of the film, but with Avatar – The Wat of Water, he went a step further, as this film is a towering achievement filled with awe inspiring visuals that take one’s breath away.

Through his filmography, Cameron has excelled at giving audiences one hell of a ride, from The Terminator (1984), Aliens (1986), The Abyss (1989), Terminator 2 – Judgement Day (1991), True Lies (1994), his Oscar winning triumph Titanic (1997) and Avatar (2009), now more than a decade since first screened. Despite weaknesses in narrative, audiences and critics, myself included, emerged from screenings stunned by the staggering beauty and scope of the film’s visuals.

Now with this long waited sequel, we plunge back into Cameron’s immersive world of Avatar, for a film greater than the first, and among the best of the year.

Whereas Avatar tore its narrative from Dances with Wolves (1990) – a man finding new meaning and peace with another tribe and connecting deeply to the land – The Way of Water is a chase movie and the most beautiful I have ever seen. 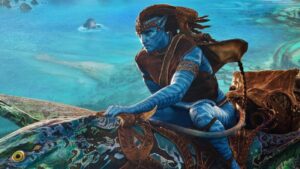 Having forsaken his human self to become Na’vi, one of the people, Jake has mated with Neytiri, portrayed by Zoe Saldana with great soul, and the couple have four children together. As they try to rebuild the shattered forest around them, destroyed by the humans aka “Sky people”, a blend of corporate goons and military maniacs clearing the planet for more humans to live, Jake and his family are again sent running when the military, led by the dangerous Col. Qauritch (Stephen Lang), come looking for him. Yes, I too thought he died in the first film, but they explain it here. They seek not the Na’vi but specifically Jake.

Jake and his family flee deeper into Pandora, finding another tribe similar to the Na’vi but more connected to the vast oceans. They agree to help Jake, grudgingly, and their alliance is not terribly strong. While with these people, Jake sees their extraordinary connection to the aquatic life near them, just as the Na’vi were so connected to the forest creatures. The underwater scenes seem to glow from within, and the creatures under the sea are magnificent creations, both dangerous and spectacular to behold. Jake learns to master the creatures and rides one, gliding through the water with masterly confidence.

The narrative really does not do much else but my God the beauty of this film! I must have gasped out loud a dozen or more times unable to believe quite what I was seeing. It is filled with wonders you must see to truly believe them.

The visual effects are arguably the greatest ever put on film, the dizzying cinematography is nothing short of a miracle, the sights and sounds astonishing and the score wonderful. Expect the film to sweep most of the craft Oscars this year, and to be in the running for Best Picture and Best Director.

The cast do their jobs well, aware I suppose that the effects and action are the primary force of the film. Sam Worthington, Zoe Saldana, Lang, Giovanni Ribisi, and Sigourney Weaver are all back, with Kate Hudson new and along for the ride.

The question about James Cameron is posed again, is he a great director? In the fifties Cecil B. DeMille made huge spectacle films that audiences loved, Samson and Delilah (1950) and The Ten Commandments (1956) among them with his Oscar winning Best Picture The Greatest Show on Earth (1952) between them. No one though DeMille a great director but he could put on a helluva show. I think the same is true of Cameron. Only once, in Titanic (1997), have I cared about his characters, a director’s flaw, so while he creates astounding sequences, he is limited in exploring emotions among the his characters. I do not think he understands actors, but that is just me.

Still this is a hell of a film that reminds you of the miracles movies can give us. Sit back and let it wash over you for three hours, it feels like two.

NOMINATIONS THAT WILL MAKE ME VERY HAPPY