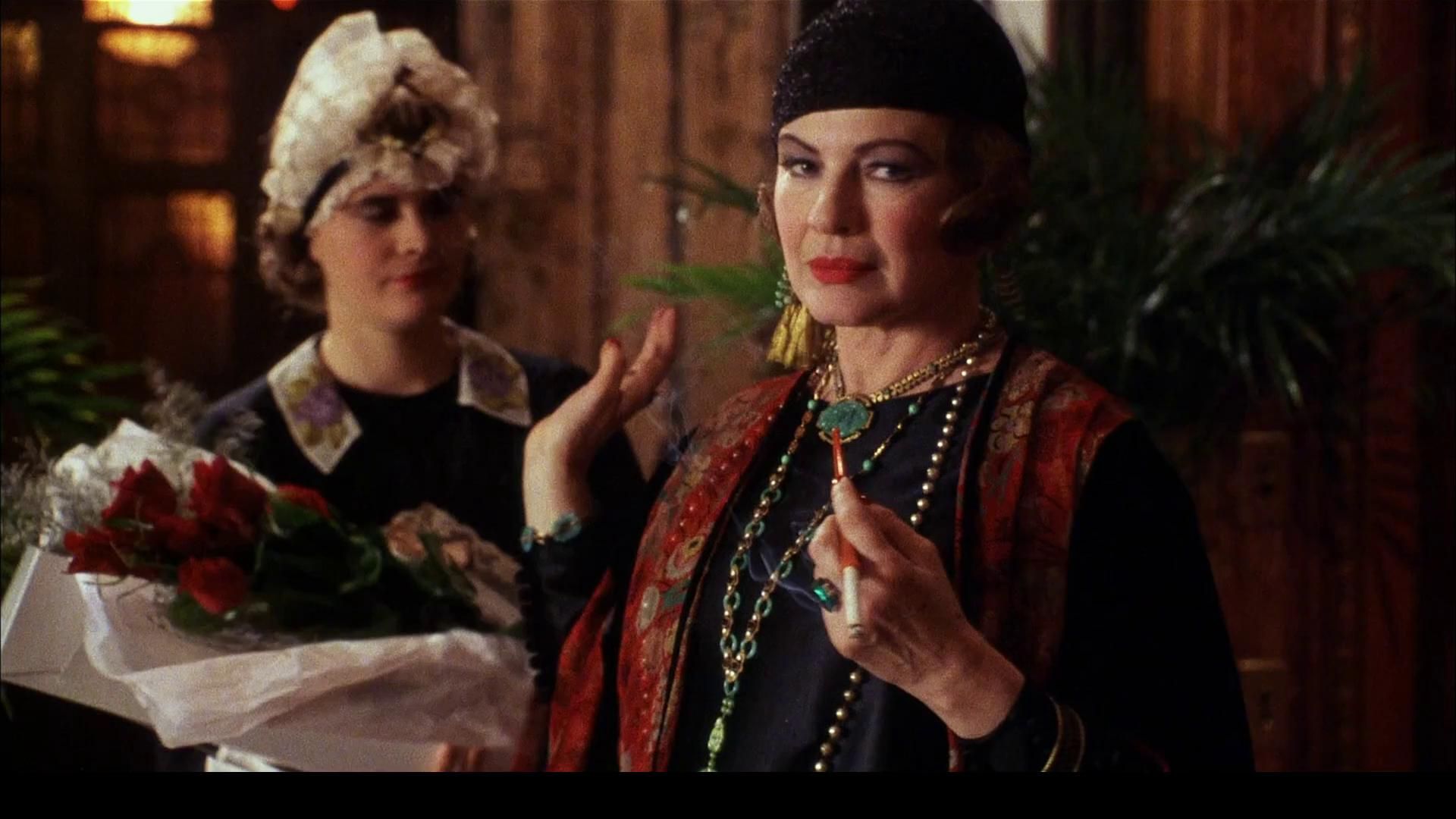 Long one of the most gifted actresses on film and stage, Wiest was already an Academy Award winner and nominee when she took the role of Helen Sinclair in Woody Allen’s farce Bullets Over Broadway. She had won her Oscar as Best Supporting Actress in Hannah and Her Sisters (1986), Allen’s widely acclaimed box office hit that saw the actress portray a struggling woman in in her thirties deciding what she wants to do with her life. Will she act? Write? Or go back to cocaine, her drug of choice? By the end of the film we have watched Holly journey to the abyss and back to the happiness she finds in her sister’s ex-husband Mickey (Allen) and a new booming career as an acclaimed writer. For that performance Wiest won every single acting award to her that year, all the critics’ awards, the Globe and the Oscar, a rare happening.

Incredibly she would repeat it for Bullets Over Broadway.

I first took note of Wiest in a small, nobody-saw-it film called Independence Day (1983) in which she gave a searing performance as a battered wife who takes a terrible revenge on her abusive pig of a husband. The joy she takes in deciding to kill him is extraordinary, pouring herself a stiff drink perhaps to steady her nerves and on goes the gas oven. A few hours later he comes home, smells the gas and sees her with a lighter, never knowing what hits him. Yes she dies with him, but she is at peace with that, he is stunned. I thought Wiest might be nominated for that but clearly it was not widely seen.

It did not take her long to make her mark.

She became a regular with Woody Allen and was quickly recognized as the most reliable character actress in movies, strong support in so many films. A second nomination came for her harried mother in Parenthood (1989) for Ron Howard, but the film of her career, the performance of her lifetime and one for the ages in cinema is in Bullets Over Broadway.

A young playwright has cobbled together enough money (his agent went to the mob) to stage his new play. Most of the budget went to casting Broadway legend, however aging, Helen Sinclair (Wiest) who is expected to be both brilliant and a box office draw. She is everything an aging diva should be with one unique skill; she knows how to play the director/writer to get exactly what she wants. Sinclair truly does see good qualities in the play, but beneath the characters exists a life only the actors can bring to it and she knows this more than poor David (John Cusack). As a veteran of the stage, she has long known as a woman her wiles can be used to manipulate her director, building him up with praise, comparing him to Chekov, all the while getting him to alter aspects of her character so she is not playing a mere housewife but a character with great sexual power. She seduces David, easily, and when he announces his love for her, she shushes him over and over with “Don’t speak! Don’t speak!”. Used often and in different tones, Wiest gives each utterance of the two words a hilarity one cannot quite believe is happening.

She portrays a diva of the highest order, caring more about her career than the others in the play, but caring most about the art they are creating. She barely has patience to speak to the other actors, and when she does it is often a put down or condescending comment to put them in line, saving her kindnesses for David.

Wiest was always an attractive actress but not conventionally beautiful as film actresses are often supposed to be. She has the most interesting eyes, and when she speaks or smiles, they nearly close in a squint that bring a mystery to her. Helen is the type of woman men like to conquer because she is smarter than they are and certainly aware of what they think of her. Her entire being is about herself, barely anyone else exists in her self-absorbed world and it is a giddy delight to watch. We can feel the fury build in her, just as we feel the sensation of power when she knows her director, like so many before him has fallen in love with her. She has no intention of loving him, she loves herself too much for there to be anything resembling love to be given by her other than to herself.

Wiest won every single major acting award available to her for Best Supporting Actress for her performance in Bullets Over Broadway including the Academy Award, the Los Angeles and New York Film Critics’ awards, the National Society of Film Critics Award, the Screen Actors Guild Award, the Boston and Chicago Film Critics’ Awards and the Golden Globe. That was historical because it so rarely happens.

Allen created a farcical film with superbly acted characters, John Cusack doing a remarkable job as the surrogate Allen character, but this film is owned by Wiest. OWNED.

Nominated for seven Academy Awards including Best Director but NOT Best Picture which remains a mystery. How did it not get in the final five when the director did?

A few years ago Wiest, the two-time Academy Award winner, announced she was hovering close to personal bankruptcy and was unable to pay her rent. To her rescue came her friend Woody Allen and she seemed to recover, though is nowhere near the worth one might expect an Oscar winner to be. Does not matter to me, I love this actress, I love her work. For me her Oscar for Supporting Actress here should have been in Best Actress category, and yes, she deserved to win that too.