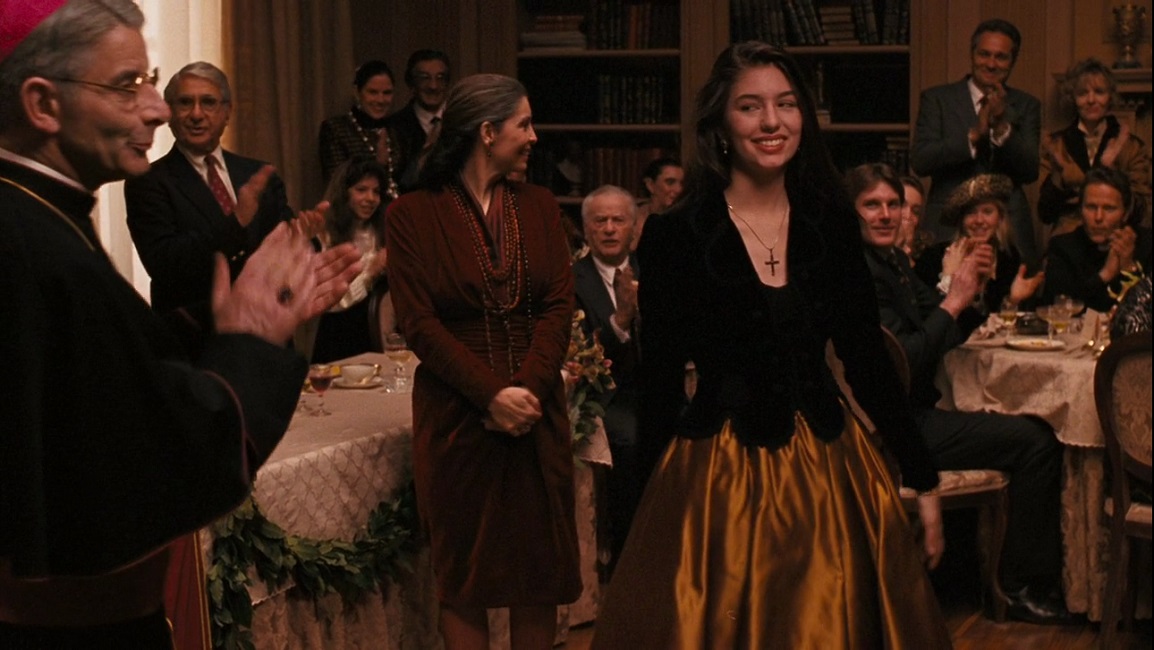 Why would Francis Ford Coppola return to one of his most maligned films to re-cut, add and take away? There is but one way to fix The Godfather Part III (1990), which is to erase the film from existence. It has never existed in my world since that first dreadful screening in 1990, after which I permanently deleted the film from my mind.

A brand spanking new cut of this film will be in theatres in December, a large lump of coal for sharp eyed movie goers.

At the end of his rope financially in the late eighties, Paramount threw Coppola a lifeline, offering the Oscar winning director $10 million dollars to direct and write a third film in the saga of the Corleone family. Sixteen years after the haunting fade out in The Godfather Part II (1974), arguably the greatest American film ever made, Coppola assembled his cast for a third film, and though Paramount promised full control, they began interfering almost at once.

DUVALL OUT, RYDER TOO

Academy Award winning actor Robert Duvall, integral to the first two films as adopted brother Tom Hagen, was upset Al Pacino was making so much more than he was. “Al was the centrepiece to the film, no question”, Duvall told me in 2005, “so yeah, give him a good payday, but twice what I was going to make? Come on Francis, be fair Coppola, but the studio, Paramount, would not budge. By then there was a script, I had read it, I was in, I loved where Francis and Mario Puzo took my character. But the money was insulting, so I told them no.”

Without a key actor, Coppola was forced to shut down the start of filming and do a full rewrite. That alone must have cost more than they were paying Duvall, but the studio had dug in. Ultimately the role of Tom Hagen was killed off, explained in a single line of dialogue, the character replaced by George Hamilton (say that out loud) which was utterly ludicrous. So a character so vital to the first two films is simply plucked from the fabric of the third, leaving a hole that could not be repaired.

Then, just as shooting is to begin, Winona Ryder, cast as Mary Corleone, arrives to the set in terrible exhaustion and on the advice of Cher (yes, that Cher), Johnny Depp (then her lover), and a group of doctors, she resigns from the film citing nervous exhaustion. Knowing he could shut down again but at a terrible cost Coppola literally grabbed his daughter Sofia out of the shower and cast her on the spot as Mary, a key role in the film. This caused a panic from actors Pacino and Diane Keaton, who were interested in protecting young Sofia and the film, so they sat down in protest with Coppola who assured them the casting decision would work. Paramount, always thinking (Not!) offered to pay for, gulp, Madonna to play the part, but this time Coppola dug in his heels and his daughter was signed. 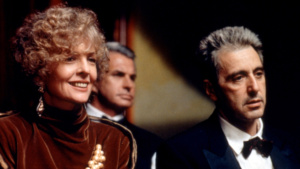 Watching the film for the first time, from the beginning, it was off. You could feel it in the rhythm of the editing, in the long introductions of characters, and in the gross inconsistencies of Pacino. True, more than 20 years has passed in the lives of the Corleones, but that haunting, melancholy conclusion to Part II, so brilliant, so perfect, seemed forgotten.

The camera pans over the estate in Lake Tahoe, now in disrepair and near ruin. What? The new lawyer portrayed by Hamilton could not sell the place? Littered with memories, and litter, we hear echoes of the past including the murder/execution of Fredo, Michael’s older brother. Then we move to New York where Michael is being awarded the highest award given by the Catholic Church (I thought the papacy was that?) in an effort to appear legitimate … at long last. However it quickly becomes apparent that the Catholic Church is like organized crime, oh the horror, the shock!

Michael’s son wants nothing to do with the family business, seeking a career as an opera singer, while Mary is used unknowingly as a front for illegal business. From time to time Michael is in the presence of his ex-wife Kay (Diane Keaton) who tells him she does not hate him, she “dreads him” though she later thanks him for letting his son follow his dream. Where the film goes entirely off the rails are the scenes in Sicily, where Michael jumps in the front seat of a car to drive Kay around the country. The world’s most powerful, infamous crime chief, going out unprotected in a place where treachery lurks around every corner? Where cold ruthless Michael attempts to be adorable to her by wearing a peasant’s hat? Geezus!

Filled with unbelievably stupid moments, moments which defied logic, I was done long before the film ends. LONG BEFORE! Poor Sofia Coppola was crucified by the critics, but she never wanted to do the part, never wanted to act! Her father put her in a terrible position, and she looks horribly uncomfortable in every love scene with Andy Garcia. Why blame the girl? There was not a shred of heat between Miss Coppola and Garcia, no chemistry at all, just two very uncomfortable actors.

Normally a decent actor, Andy Garcia glowers through most of the film, freeze, stare off in anger, freeze, repeat so when Michael announces Garcia is now the head of the family, I was stunned into greater disbelief. Garcia seems hellbent at the beginning of convincing us he is Sonny’s son, showing off his explosive temper. But with James Caan as Sonny, his fury was unpredictable whereas Garcia telegraphs every moment of rage, it becomes like a comic schtick.

The betrayal of the Corleone family by the church seemed just and interesting yet was written terribly and comes off a confusing, convoluted mess.

And Pacino. What the holy hell?

This is not the same Michael we left at the end of Part II, oh no. This new, inconsistent Michael wants redemption, wants to be loved, to be forgiven for the many murders he has ordered or committed. More animated, louder, both going with the new improved (Not!) Pacino who came back after Revolution (1985) a very different actor. “Look at me ma…I’m ACTING.” he seemed to be screaming from the highest rooftops, and has never ceased. Pacino’s work for 30 years has been all about bombast, the louder the better. His Michael has a single great scene, a confession to a priest, a true good man at the Vatican, where the mafia leaders seeks forgiveness for murdering his father’s son, his brother. It is a powerful moment, in a film absent of many such scenes.

Even when Mary is killed on the steps of the opera house, it means so little to us because we have not got close to any of the characters. Shot, blood dripping from her stomach wound, obviously fatal, she turns to her father and says in a dead voice, “Dad?” before collapsing dead in front of him. Howls of laughter erupted in the cinema the first time I saw the film, they laughed!! 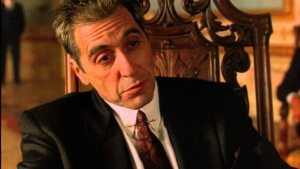 This leads to Pacino’s big moment in the film, a howling scream of anguish from the bottom of his soul at losing his child. Coppola creates a silent scream, like the famous Munch painting before giving us sound and we watch a Michael as his soul dies, spittle running down his chin. By this point in his career we realized that Pacino was of the mind the bigger the better, the louder the greater. Um, no. In the previous two films he barely spoke above a whisper, when he spoke and he was truly terrifying, his presence radiating true danger. Not here, not for a second. I was embarrassed for the actor because I felt nothing for his character. The film ends with his death, sitting alone on his estate, remembering his past, those he loved and who loved him, but they are all gone now. An orange drops from his hand and he is gone.

And no one cares because by that point we understood neither the character nor the film had any connection to the previous two, both masterpieces. Coppola forgot consistency…

Why return to fix what is irreparable? Better to burn all prints and render the film extinct, treating it as I do, as though it never happened.

Sadly, this is not the first time Coppola has re-cut an original, letting many years pass before returning to the picture. How I wish he would invest his time and immense wealth in a new film. Previously he cut The Godfather and The Godfather Part II into chronological order for television, restoring several scenes in the process. An hour of footage was added to Apocalypse Now (1979) including the restoration of the haunting French plantation scenes, while The Outsiders (1983) had several scenes removed, others added, and the film was re-cut to closer follow the novel. Just last year Coppola returned to The Cotton Club (1984) restoring and re-editing it the work, actually improving it.

He may have scenes for The Godfather Part III he wishes to restore but I will be damned if I can find anything he should keep. 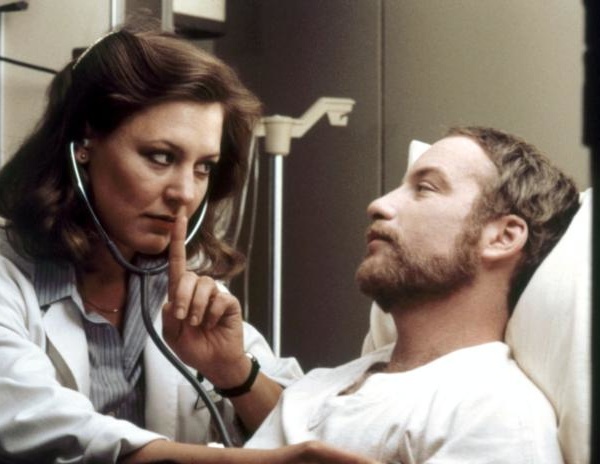