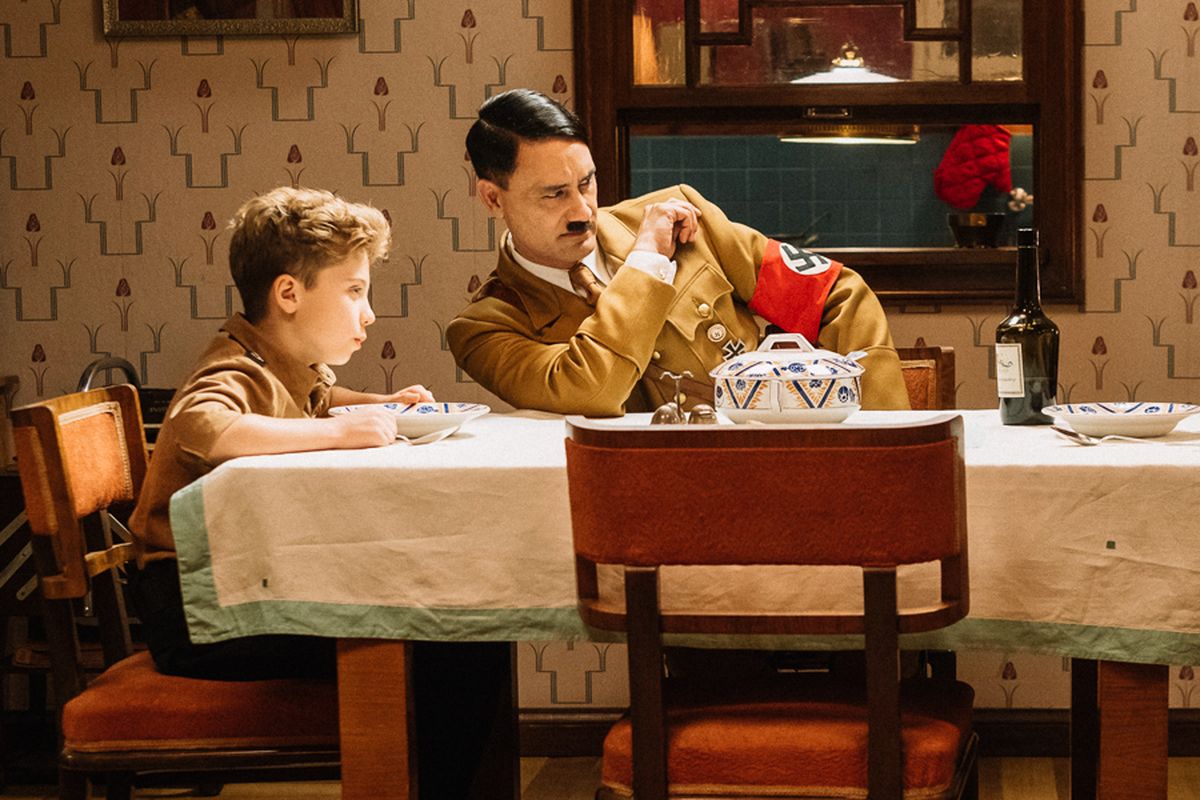 If they crossed the comic minds of Charles Chaplin, the Marx Brothers, Monty Python and Mel Brooks, that might begin to give an idea about the daffy, dazzling comic genius of Jo Jo Rabbit. Easily the funniest American film I have seen since Sideways (2004), possibly the most divisive since The Passion of the Christ (2004) it is a zany film to say the least, that goes where no previous movie has ever dared to go. There were moments when the laughter rocked me so hard, tears slipped down my cheeks, while gales of laughter exploded from the capacity press screening.Then just as sudden, the film would take a turn and nothing at all was funny anymore. Though I found the film hysterically comical, make no mistake, others will find it divisive as it goes dark very quickly. Yes, it dares to poke nasty fun at Nazism, at the ideology, but it is also clear in the fact Nazism was a mania and a cruelty unlike anything we have ever seen before. With its comedy up front, it also is a take down of fascism and the intensity of the hatred promoted by the Nazis.

Jo Jo (Roman Griffin Davis) is a wide eyed 10 year old Nazi zealot who blindly believes in Hitler, who loves everything about Hitler and Nazism. So great is the boy’s adoration of Nazism he has an imaginary friend: Adolf Hitler (Taika Waititi), who also directed and wrote the film. But this is a Hitler unlike any we have before encountered, giddy, playful, energetic, goofy, silly, even downright daffy. This Adolf is a cuddly little guy who praises Jo Jo as the best little Nazi he has ever seen, and even when Jo Jo fails miserably at Nazi training, Hitler stands by him.

When Jo Jo discovers his sunny mother Rosie (Scarlett Johansson) is part of the resistance and is hiding a Jewish girl in her home, the boy is torn, knowing he should report her, but realizing what would happen to her if he did. He is curious about the Jew in the closet, Zelda (Thomasin McKenzie), believing he can learn about the Jews with her in his home.

Jo Jo has a peculiar relationship with his mother, an exuberant, funny woman, who speaks her mind and does not understand her son’s blind faith in the Nazis. There is a scene I urge you to watch for, as Rosie talks to her son and does a dance on a ledge, leaving him face to face with her shoes. He will come face to face with her shoes in a later scene that changes everything he believes in. Though Rosie is fighting for the greater good, trying to save an innocent life and raise her son right, a terrible tragedy will befall their trio.

The more conversations Jo Jo has with Elsa, the more he begins to question the Nazi ideology he has so  believed in for so long. His perspective, much to the chagrin of his invisible friend Hitler begins to evolve, and this brings out the true Hitler, the Hitler we know, the ranting madman who systematically murdered six million Jews. He rants to Jo Jo who responds with the years best line, which drew huge ovations in the press screening I attended.

Taika Waititi does a masterful job balancing the dark comedy with slapstick and then the film’s darker moments. To his credit as an artist he never missteps. His finest scene in the film as a director, involves Jo Jo twice being face to face with the lovely, stylish shoes his mother wears. That is all I am going to say.

His performance as Hitler is simply sensational. Wide eyed like an eager puppy, he truly is cheering for Jo Jo and fills the screen with a buoyant energy that is infectious. We wait for him to show up, we like when he does because you never know what is going to happen when he appears. With his dancing, warm cartoon eyes, the moustache slightly off kilter, he is downright cuddly. Hitler! And even though we know the monster he truly was, so great and involving is Waititi as Hitler, we go with what he is doing. As the film progresses and Jo Jo learns from Elsa and his mother, Hitler is more prone to rages, which is the Adolf we know and loathe.

As Director and writer,  he brings to us a raucous, rollicking comic gem, so exuberant in its vicious take down of the Nazis, so brash in its execution, you cannot call the film anything else but a comedic masterpiece. A camp where young boys are taught to burn books, through grenades and kill? The mind reels.

Young Davis is a revelation as Jo Jo, absolutely into what the Nazis are doing, with alarming faith in Hitler, the film is a slow dawning of realization as to what Nazism is all about. As Germany falls, so does his faith in his fearless leader. It is a wonderfully confident performance as the entire film sits on his shoulders, and not a false step is made. Black comedy is among the more challenging forms of that genre to make work, the acting must be perfect and as the lead Davis is superb.

Rarely does Scarlett Johansson get a chance to cut loose as a comedian but here she is given a plum role and she explodes off the screen in it. Like a dizzying modern day Carole Lombard she exudes rare sexuality, which Rosie knows, is gorgeous, which again she knows, and is disgusted by all things Hitler, which only her son knows. Compassionate to a fault, her huge heart will land her in trouble, but she teaches her beloved son what is right, and that hatred has no place in the world.

Oscar winner Sam Rockwell has a lovely small part as the Commander of the camp where children are trained to be Hitler Youth. Having lost an eye in combat, he is no longer fit to fight, but he can train Nazis, Er…children, which as long as he drinks all day he can handle. Though a Nazi, he turns out to much more, saving Jo Jo’s life, likely at a terrible cost.

This was not the first film to portray Hitler as a fool, Charles Chaplin did so with The Great Dictator (1940) in which the artist portrayed Adonis Henkel, a megalomaniac dictator, and a second role as a little Jewish barber who has the misfortune to look exactly like Henkel. Hitler was outraged by the film, banning it in Germany, exactly the reaction Chaplin hoped for.

To be clear, I loved this movie. I laughed out loud and often and that rarely happens. It was blackly comic, irreverent, risky, bold and brash and remained black to its very soul right to the bitter conclusion. While it takes some getting used too to see Hitler as a funny, goofy character, in a minute or so you will accept what is happening and go with it. A child is educated at a horrific price, learning his idol, the man he worships is a monster. And to Adolf’s face, well, his imaginary face, gun shot head wound and all, Jo Jo roars what we have been thinking all our lives, “Fuck you Hitler!”

A comic masterpiece, one of the years very best films and likely Oscar nominee in several categories.