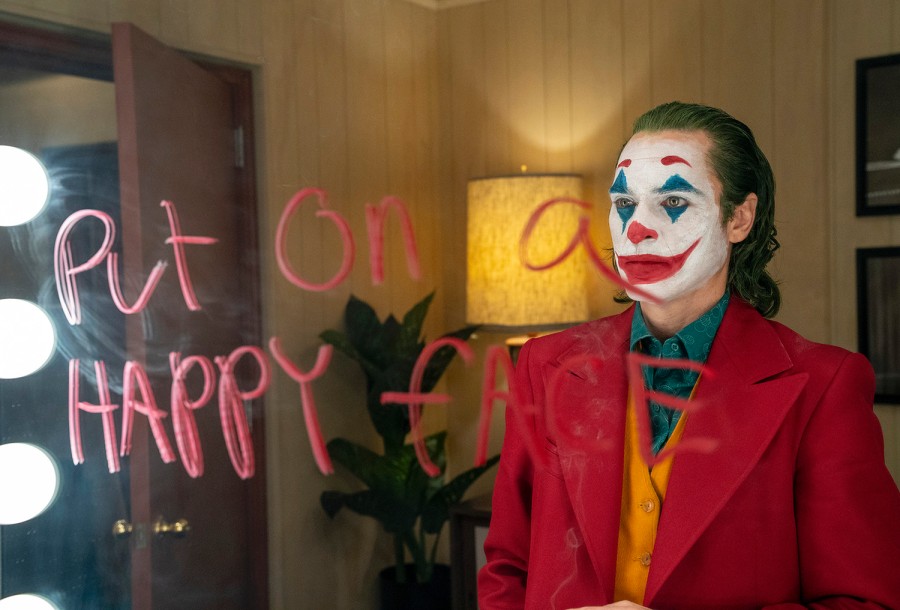 Watching Arthur Fleck (Joaquin Phoenix) trudge up that long concrete set of stairs on his way home each day, we can feel the burden he carries. Like a stone metaphor for his everyday existence, those steps are what each day must be to him. Each step feels impossibly weighted down by the trials of life and, though he is trying, poor Arthur is failing. Life keeps piling up obstacles and though he tries, Arthur is ill-equipped to handle them. Later in the film, liberated by embracing the homicidal maniac within, he dances down those same steps like Gene Kelly merged with Michael Jackson and a splash of demonic Malcolm McDowell in A Clockwork Orange (1971) thrown in. He seems lighter than air as he descends those steps, gracefully, with elegance inspired by murder. Now wearing clown make up, quietly seething with rage, he gracefully moves down the steps as though gleefully descending into hell with each downward step. Impossibly light on his feet, no longer burdened by life, murder and chaos have indeed set him free.

In a career best performance, no small feat given his searing The Master (2012), Joaquin Phoenix is utterly astounding as Arthur Fleck who before our eyes becomes the Joker, Gotham’s most dangerous criminal, destined to go to war with Batman, though we see none of that here. In fact, that conflict is years away, as Arthur encounters a very young Bruce Wayne, perhaps 10 or 12 years old.

This is an original film, a movie apart from the DC Universe or Dark Knight films, this is the unofficial story of how Joker became Joker.

Unofficial or not, it works for me, and in the final frames Heath Ledger could step into the role without missing a beat. Director Todd Phillips has done an extraordinary job with this film, stirring echoes of both Taxi Driver (1976) and The King of Comedy (1983) as Arthur ticks like a time bomb to his unleashing of mayhem and murder. You can feel it throughout the film, the tension often unbearable as we are left wondering how much this man can take before exploding?

Like Travis Bickle (Robert De Niro) in Martin Scorsese’s Taxi Driver, Arthur is a ticking time bomb, and the film draws much of, if not all of its tension as to when, exactly, he will explode. Though we do not get the bloodbath we do in Taxi Driver, we are given a hint of what is to come from this dangerous clown faced maniac. 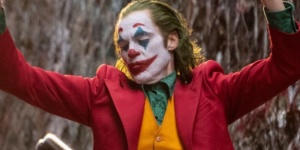 Plagued with a condition that causes him to burst into sudden uncontrollable near fits of laughter, he carries a card he passes to anyone who might be offended by him. When a group of drunken Wall Street masters of the universe attack him on a subway train, and after beating him, he pulls a gun his friend gave him and cuts them down. Now with a taste of lashing back, Arthur begins to evolve, but evolving means descending into murderous madness. Arthur finds he likes killing, but what he loves more is the chaos that comes with it. Feeling lighter than he has for years, he moves differently, dances about his dingy apartment, and rids himself of anyone who might betray him. Asked to appear on a late night TV talk show after his comedy act was mercilessly mocked by the host, Murray Franklin (Robert De Niro), he shows up in full clown make up, applied with precision and care. Seconds before going on, he asks the two faced host to introduce him as Joker, nothing else.

And it is here that he lashes out at those who have mocked him, teased him, beat him or abused him in any way. What happens is sudden, shocking, even though we suspect it is coming! That is a credit to the fine direction of Phillips, who brings to the film, the darkest intensity of any comic book based film thus far. The scene is alarming in its realism and for what transpires, a grim reminder that death can be immediate, altering everything moving forward.

What is it about this role that great actors tear into with such relish?

Jack Nicholson made the part his own (we thought) in Tim Burton’s Batman (1989) earning a Golden Globe nomination. There was much scoffing when it was announced Heath Ledger was taking on the role in The Dark Knight (2008) but no one laughed or scoffed after seeing the actor tear into the role with genius. Not only did he surpass what Nicholson had achieved, not only did he win an Academy Award for Best Supporting Actor, he gave one of the truly greatest performances ever put on film. Ledger would win an Oscar for the role after he succumbed to an accidental overdose of painkillers. More recently Jared Leto took a run at the character, and though bizarre and twisted, he bore no connection to the other portrayals of the character, including that of Phoenix.

Though he tries to conform, to fit in, Arthur just cannot manage to be part of the world he inhabits, until he commits murder, at which point he is at home. The more he indulges his need for mayhem and destruction, the more at peace he becomes with who and what he is. His appearance on the talk show is a kind of coming out event not for Arthur, but for Joker, and when the show ends midway, no one will ever forget Joker.

Todd Phillips creates the world Martin Scorsese put on screen in Taxi Driver, a city teeming with corruption and decay, crime on every corner, no hope in sight. Anger grows on the streets, an outlet for the rage is much needed, and we wait, patiently awaiting the explosion of carnage we know is coming, the release of violence that is a substitute for sex for Arthur. It is a formidable achievement given what Tim Burton and Christopher Nolan have already created.

Supporting work from De Niro as the smug talk show host recalls his performance in The King Of Comedy (1983). My God is this where Rupert Pupkin ended up? Frances Conroy does fine work as Arthur’s mentally ill mother, her delusions impacting her son more than she knows.

But at the centre of this hurricane of a film is Phoenix, taking the kind of acting risks he has become renowned for taking, walking a high wire act, knowing the comparison to Ledger will come fast and furious. No concern, for at the end of this film, we could flash forward to The Dark Knight (2008) without missing a beat.

Phoenix might be the second actor to win an Oscar portraying this character, and the film and director appear headed for nominations. A dark, troubling masterpiece, comic book adaptations should be so lucky to be this great.

So harmful was the actor’s weight loss, nearly 50 pounds, his energy permitted a single take for each scene, which for anyone who knows even a bit about film acting is nothing less than extraordinary. What this means is that each incredible, perverse, and twisted moment he is onscreen was captured on the first take. Unbelievable.

A dark masterpiece and one of the years best films. 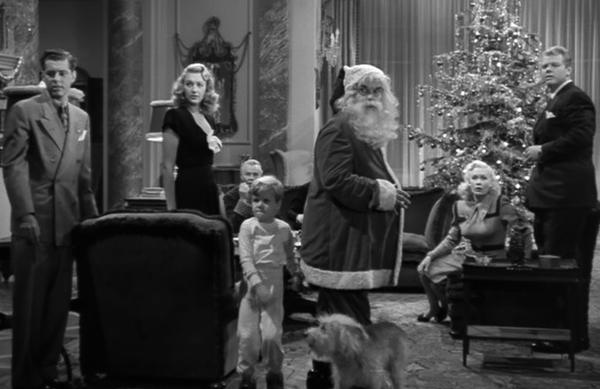 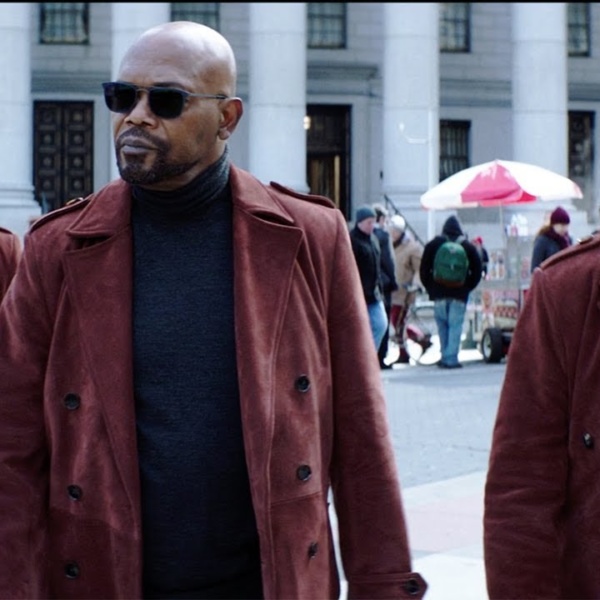