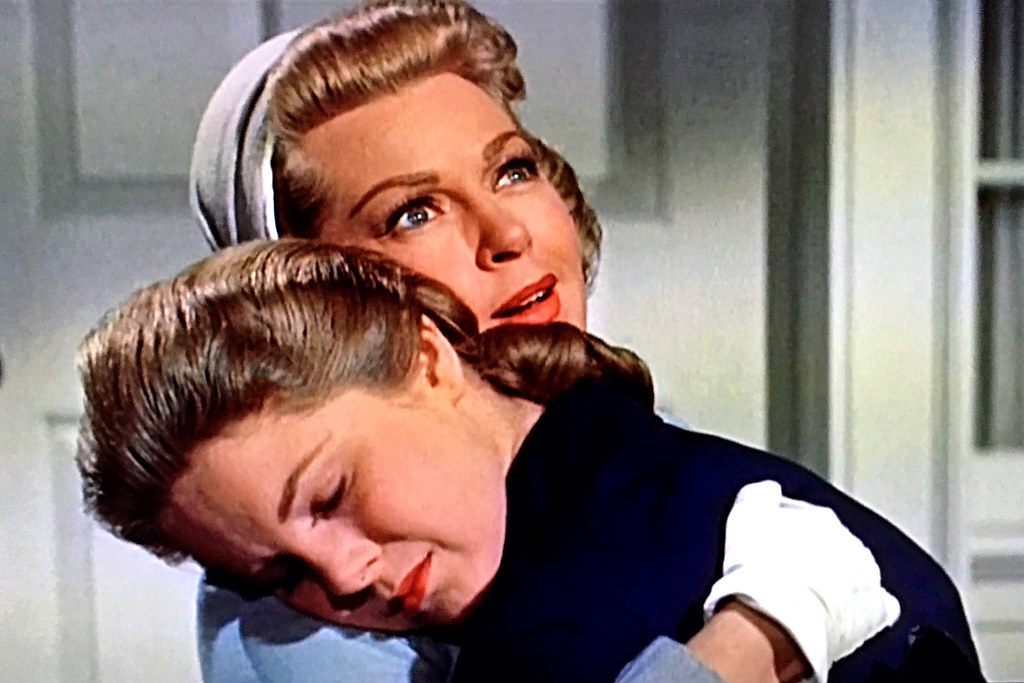 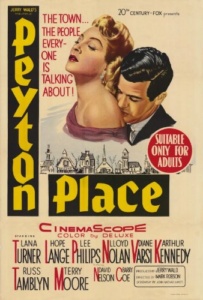 Peyton Place was a big deal in the fifties and sixties, first as a best-selling and scandalous novel, then as a hit motion picture (followed by a sequel), and finally as a must-watch prime-time TV series.

When Grace Metalious’ novel was first published in 1956 the book shocked readers with its depiction of a perfect New England town and the secrets hidden not far from the surface. The town seemed to represent the fifties Eisenhower ideal of family, home and community, but Metalious wanted to expose the hypocrisy, injustice and the destructive nature of privilege. Readers lapped up the novel’s salacious use of gossip, out-of-wedlock children, incest, nudity, abortion, adultery and murder. The book was on the New York Times best seller list for over a year. It was one of those books that teens – if they got their hands on it – would hide under their mattress, away from the eyes of their parents (who were probably also reading it).

Producer Jerry Wald was quick to buy the film rights and it went into production under the direction of Mark Robson. Although no New England state was ever named, there are enough hints to assume the fictional Peyton Place was in New Hampshire, where Metalious was from. When the film was ultimately released in December of 1957, it proved to be a critic proof smash and launched the careers of a number of its young cast, as well as provide Lana Turner with a career recharging hit (and her only Oscar nomination).

The film version of Peyton Place focuses the story on Constance (Turner) and her daughter Allison (Diane Varsi). Turner is the seemingly uptight owner of a local dress shop who is struggling with losing control over the teenage Allison. Allison aspires to be a writer and can’t wait to get out of the town – and away from her mother. Serving as a catalyst for the bird’s eye view of everything that’s going on in the town is the new high school principal Michael Rossi (Lee Philips). Rossi, who soon becomes interested in Constance, is a good deal more progressive than everyone is used to and quickly becomes aware of dark underbelly of the town and its two-faced inhabitants.

One of the major complaints critics – and Metalious – had with the film was the fact that it whitewashed some of the novel’s seedier elements. John Michael Hayes’ screenplay hints at everything in the book, but it’s a good deal less explicit, taking out some of the bite – and ironically upholding the hypocrisy that Metalious tried to highlight. Still, it was pretty strong stuff in a decade when most films continued to adhere to the strict production code established in the 1930’s. Having grown up myself in a small town in the sixties and seventies, it’s depiction of small-town life feels very accurate. Director Robson and his creative team give the film a beautiful veneer – each season is something out of a Currier and Ives painting – which helps make some of the film’s more adult storylines more impactful, and at the same time easier to digest. It also helps that the film feels like it’s set in the fifties, although it actually begins before World War II. Nobody seemed to have shared that with the costume or hair designers, but it doesn’t matter.

It might have been interesting to see what a director like Douglas Sirk would have done with this material. By this point Sirk had become the master of glossy, beautifully designed, slightly melodramatic films that held up the fifties ideal of absolute (and unattainable) perfection. But underneath, Sirk’s images were filled with symbolism as he gently skewered the notion of convention, class and materialism. You can watch any of Sirk’s films multiple times – particularly Magnificent Obsession (1954), All That Heaven Allows (1955), Written on the Wind (1956), and Imitation of Life (1959) – and still pick up some new subtle message or visual clue as to something deeper he wants to convey. Robson uses more of a sledgehammer approach. There isn’t a lot of subtlety in Peyton Place, but it is definitely entertaining.

Lana Turner’s career was faltering at this point after a few missteps during her final days at MGM. She was only 36, but her career prospects were dwindling. By swallowing her vanity and playing the role of the mother of a teenage daughter, Turner dialed down the glamour (she still looked terrific) and delivered one of her better performances. She’s very good as the secretive mother – she plays everything closed and uptight and it makes her more interesting. When she does erupt, it feels like real anger rather histrionics.

Hope Lange was a still a relative newcomer at this point, but her work as the unfortunate Selena drew deserved raves and an Oscar nomination for Best Supporting Actress. Selena is the best friend of Allison and endures most of the film’s nastier moments. Other strong performances came from Arthur Kennedy (Oscar nominated) as Selena’s drunken stepfather, Betty Field as her mother, Lloyd Nolan as the town doctor. Russ Tamblyn and Diane Varsi also received Oscar nominations for their work.

In 1959 Metalious released a follow-up to the original novel – Return to Peyton Place – and it was filmed in 1961, but neither matched the success of the first book and film. The town became a household name again in 1965 with the debut of the TV series on ABC, featuring a then unknown Ryan O’Neal and Mia Farrow. It ran for five very popular seasons.