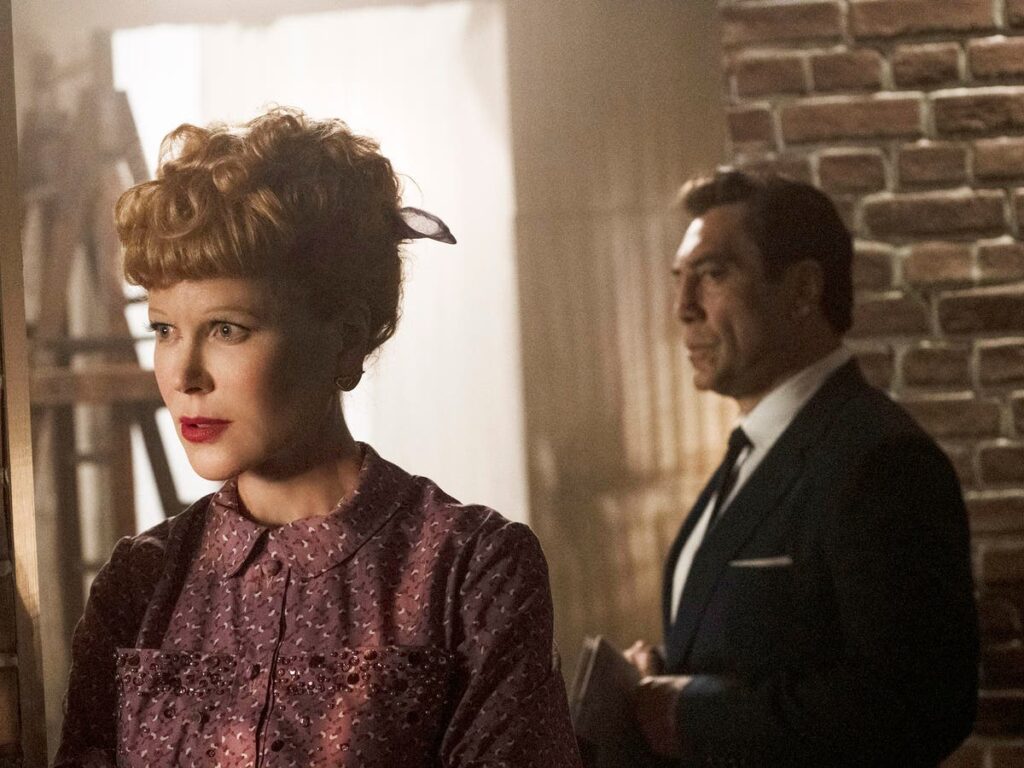 I guess it is possible to know too much about someone. Particularly when that person and her husband are the subject of a film biography where dramatic license is liberally employed to tell their story. That’s what Aaron Sorkin has done here in telling the story of Lucille Ball and Desi Arnaz in Being the Ricardos.

A fan of both I Love Lucy and the actress Lucille Ball for as long as I can remember, I’ve consumed pretty well everything she did on film, on television and every book written about her since my first book purchase in 1973. That meant going into Being the Ricardos I would need to put that knowledge on the back burner and have an open mind to the choices that Sorkin made to tell the story of Ball and Arnaz and their relationship, both in front of and behind the camera. That wasn’t easy.

The film focuses on one week in the filming of I Love Lucy in its second season, and this is where Sorkin pulls major dramatic licence, but it works (mostly) for the drama and the story he wants to tell. He combines major events in the lives of Ball and Arnaz that happened over the course of about four years, but he pushes them all into one week so we’re seeing how the loving yet volatile relationship they have survives the multiple ordeals.

First up is Ball being accused of being a communist during the red scare of the late forties and early fifties. This happened in 1953 through an item in Walter Winchell’s column and predictably all hell broke loose behind the scenes. Ball was the biggest star in North America and I Love Lucy was TV’s biggest hit. It looked like that could all vanish. Was she a communist? No, but that didn’t matter back them. It was all about circumstantial evidence.

Sorkin has also thrown the surprise 1952 announcement that Ball and Arnaz were expecting their second child in the mix, which they want to write into the script of I Love Lucy so the Ricardos would be having a baby as well. Sponsors and the network were not happy, as TV had never presented a pregnant woman before.

And the writer-director has also included a 1955 “Confidential” magazine story about Arnaz’s reported philandering with prostitutes and the devastating impact that has on Ball. This is all paired with the backstage challenges between co-stars William Frawley (J.K. Simmons) and Vivian Vance (Nina Arianda) which are also heating up (the two never really got along). It makes for a pressure cooker of a week as Ball and Arnaz work to produce yet another episode of America’s funniest TV show.

Does it work? For the most part it works better than I thought it would but it’s not the home run it should be. Sorkin’s dialogue is fast-paced, and he keeps things moving with humour and a variety of confrontations between the characters, actually creating some tension as to how all of this will work out. If the dialogue feels a little anachronistic, that seems to be one of Sorkin’s trademarks – he’s all about getting the point across with lightening paced, brittle exchanges. To Sorkin’s credit, Ball’s daughter, Lucie Arnaz, said that her mom wasn’t the easiest person in real life, and Sorkin’s writing for the character of Ball shows that.

Sorkin also makes use of a framing device with some latter-day interviews with the writers of I Love Lucy (nicely played by Linda Lavin, Ronny Cox and John Rubinstein). This helps to give context to the “week” that’s being depicted and he also uses it to set up of the backstory of the characters. But the backstory is where the film stumbles for me – in a major way. Sorkin truncates Ball’s career in the forties for absolutely no reason other than it feels he couldn’t be bothered to work what actually happened. He uses flashbacks to show how the couple met and to show what set the stage for them to work together on I Love Lucy. One scene is set in 1942 after Ball had received some excellent reviews for the RKO Studios film The Big Street. But one of the posters on the wall of the office where the scene is set is from 1950. Huh? We’re then told that she got the part in The Big Street because they couldn’t get Rita Hayworth or Judy Holliday, which makes no sense. In 1942 Hayworth was under contract to Columbia Pictures and just beginning to become a major star. Judy Holliday wasn’t on anyone’s radar in 1942. However, both Ball and Hayworth were mentioned as contenders for the film version of Holliday’s Broadway hit Born Yesterday, but that was in 1950. At the end of the scene Ball is let go from RKO and told to get into radio. Not how it happened. She moved from RKO to MGM where she had major hits with DuBarry Was a Lady (1943), Best Foot Forward (1943) and a series of minor hits before freelancing and then moving to Columbia later in the decade. She started a radio series in 1947 called My Favourite Husband and it ran for three seasons, at which point she and Arnaz started pitching the idea for I Love Lucy to give them time together and get him off the road from touring with his band. The mixing up of the timelines and personalities makes zero sense and is frustrating to watch.

What about the casting that set social media ablaze with negativity last year when it was announced that Nicole Kidman and Javier Bardem would be playing Ball and Arnaz?

Kidman is actually very good as Lucille Ball. It’s been said many times – by Ball herself, her kids, her co-stars – that the actress was nothing like the Lucy character she first created with on I Love Lucy (1951-57) and its follow-ups The Lucy-Desi Comedy Hour (1957-60), The Lucy Show (1962-68), Here’s Lucy (1968-74) and Life with Lucy (1986). What Kidman does here is nail Ball’s directness, her vulnerability, her temper, and her laser focus on what worked for her as an actress and what worked for the character of Lucy. And when Kidman as Ball steps into the character of Lucy Ricardo, her voice goes little higher (a choice Ball made for the character), the eyes widen, and the face lights up. Does Kidman look like Ball? Not really but I don’t think that matters – the creative team achieved enough visually that you don’t question who she is. What I particularly like is that this is the first time that Ball is presented as a three-dimensional, contradictory, sexy, smart and driven woman. There were a couple of lousy TV films after her death in 1989 that just played to the stereotypes but told us nothing about the woman. This time we get more.

Bardem is also good, but he doesn’t have the opportunities that Kidman does. He’s not as charming as he needs to be, but he does present Arnaz as both smart and intuitive. I’m not sure if the fault is in the writing, but I wanted to see more of the character’s seductive side. He also doesn’t look like Arnaz, but again you get who this is thanks to a stellar creative team. The creative team here – costumes, production design, hair and make up, cinematography – really do a terrific job of recreating Hollywood in the early fifties. The film looks spectacular.

Both J.K Simmons and Nina Arianda do standout work as Frawley and Vance. Again, they aren’t the spitting image of the two actors they’re playing but they nail the characters. Frawley is presented as gruff but savvy, and Vance is shown as smart but insecure, exactly as they should be for this to work.

If you want to get the full story of Lucille Ball, the TCM podcast “The Plot Thickens: Lucy” is an exhaustive and honest look at the actresses life and career told over 10 episodes. Definitely worth the time. 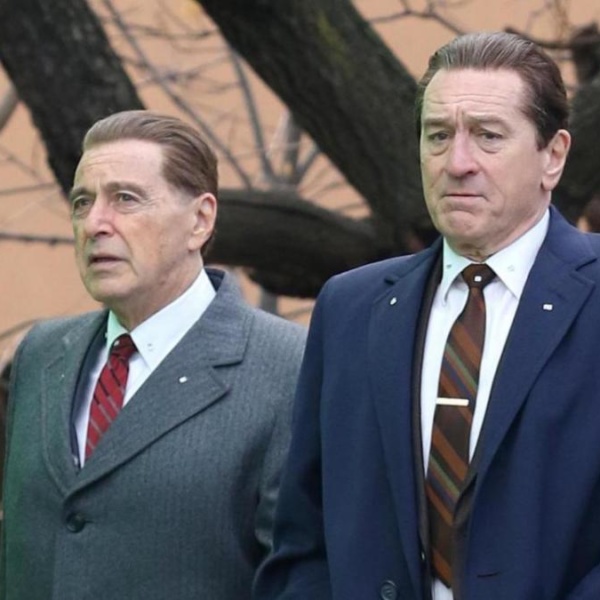 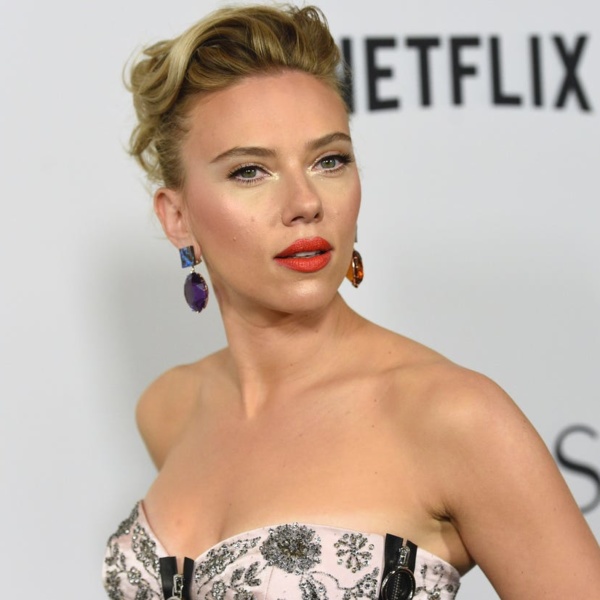