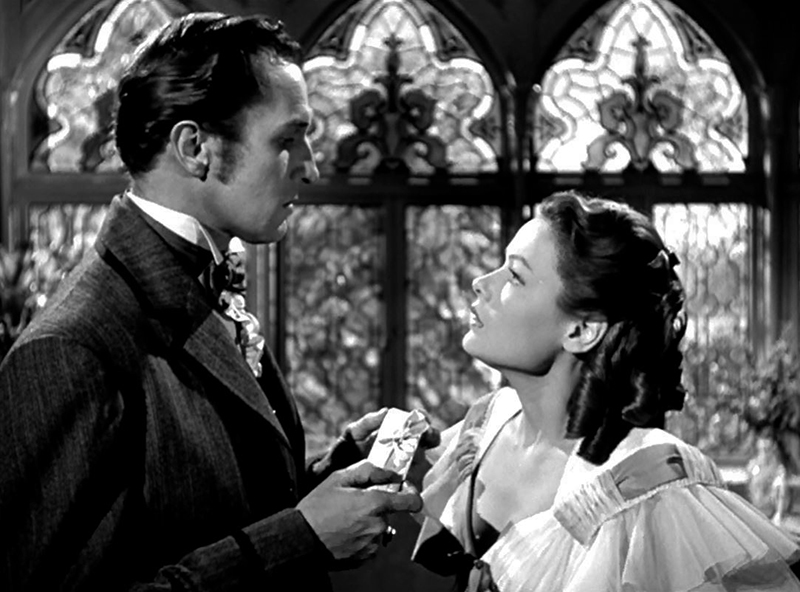 A near perfect movie recipe: atmospheric black and white cinematography combined with a big old house, a troubled heroine, a troubling hero, a quirky cast of supporting characters, and all set in a bygone era. If a filmmaker and screenwriter can get those things right, then for me that’s movie bliss.

Two prime examples were released in 1946 – Robert Siodmak’s The Spiral Staircase and Joseph L. Mankiewicz’ Dragonwyck, his first film as director. Both films garnered solid attention and reviews at the time of their release but 70 plus years later they now stand as two of the best examples of the gothic thriller/romance genre made during Hollywood’s golden age. They are both still eminently watchable, the suspense still resonates and they both provide a terrific showcase for their vintage casts.

Gothic films usually centre around a female character who, while not always a victim, is usually disadvantaged. That character is usually caught between the attention of two men – one good, and one you’re just not sure about. And the action usually takes place in a beautiful home or estate – giving the director lots of opportunity to leverage shadows, dark rooms, locked doors, and grand windows to better view the windswept and stormy nights. If the budget and creative freedom is there, these films also provide a field day for any design team. 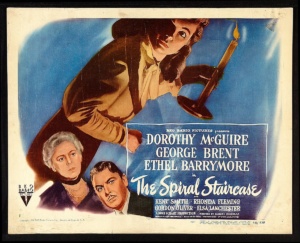 The Spiral Staircase has stayed with me since a late-night TV showing back in the seventies. I watched it any time it was aired and have made good use of the DVD over the last few years. Adapted from a novel by Ethel Lina White entitled “Some Must Watch” (1933), the film went into production at RKO Studios in 1945. The story had originally been purchased by producer David O. Selznick as a vehicle for Ingrid Bergman, but he sold it to raise money for his epic western Duel in the Sun (1946). Dorothy McGuire got the lead and one of her best film opportunities.

Set in Vermont at the early part of the last century, it’s the story of a serial killer who is focusing on women with some sort of disability. McGuire plays Helen, a mute young woman who is working as a maid to the bedridden old matriarch (Ethel Barrymore) of a grand old Victorian home just far enough from town to add to the suspense. Living in the home with her are the woman’s stepson (George Brent) and son (Gordon Oliver). Also part of the mix is a handsome young doctor (Kent Smith) who is new to town and has taken a shine to Helen. The film opens with the murder of a handicapped young woman in a hotel room and very quickly the audience – and Helen – get the sense that she’s being watched. We don’t know by whom, but it’s pretty clear it’s going to be someone she knows.

Director Siodmak manages to blend elements of romance, noir and horror seamlessly, with none of these elements taking over as he balances the ultimately perverse story of a demented voyeur. The voyeur element is expertly executed by having the camera be the eyes of the killer as he goes after his victim. There is already something inherently spooky about pre-dusk autumn in New England and the effective use of special effects for the storms and the wind only add to the suspense.

Another asset of The Spiral Staircase is a quartet of strong performances by key female members of the cast. The men are solid and do what they need to do, but it’s the women who bring the film its spark. McGuire is both vulnerable and strong as the damaged Helen – she gives the character real strength, but her expert playing of the character’s inability to speak elevates the anxiety of the audience when she finds herself in trouble. Ethel Barrymore as the slightly frightening matriarch also does some typically strong work. Her character has a soft spot for Helen, but no one else as she verbally lashes everyone else in her path. The fact that the character is bed-ridden doesn’t make her bark any less threatening. Barrymore received a Best Supporting Actress Oscar nomination. In supporting roles, both Elsa Lanchester as the brandy sipping cook and Sara Allgood as a put-upon nurse provide much needed levity. 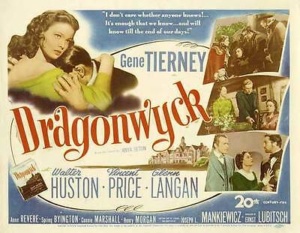 Released a couple months later was the handsomely mounted 20th Century Fox production of Dragonwyck. Set about 60 years earlier than The Spiral Staircase, it takes place in a baronial mansion on the banks of the Hudson River, a few hours from New York City. The film opens on a farm in Connecticut where a principled fundamentalist (Walter Huston) rules his wife and daughters with an iron fist. Miranda (Gene Tierney) is the most independent of daughters and she has the opportunity to leave the farm and become a companion for the child of Nicholas Van Ryn (Vincent Price), a distant relative. Her father relents and she moves to Dragonwyck Manor with her rich relative to care for his daughter. But the situation soon reveals itself to be much darker that Miranda had envisioned. Van Ryn is solicitous, but also arrogant and demanding. He has strained relationships with his wife, daughter and his tenant farmers. We also get the sense that there something else not right with Van Ryn, something more disturbing.

Mankiewicz shows great confidence in directing his first film. Although not anything like the urbane and witty films he would be known for (A Letter to Three Wives, All About Eve), Dragonwyck is a suspenseful and eerie adaptation of the Anya Seton’s best seller. He sets things up perfectly by showing us the restrictive life that Miranda has at home on the farm and we are completely in synch with her desire to experience something new at Dragonwyck. As she travels by boat to the mansion, we’re as excited as she is at seeing the house for the first time. And our dread begins as soon as she walks in the door where’s she’s greeted oddly by the housekeeper, played by Spring Byington. Dragonwyck goes beyond The Spiral Staircase by introducing the idea of hauntings, family curses, insanity and drug addiction. It’s like a gothic thriller buffet!

The underrated Gene Tierney leads the cast and she’s wonderful as she takes the character from girlish naivete to suspicious and threatened wife. The very beautiful Tierney never got the recognition she deserved as an actress and this film came as part of a string of strong performances: Heaven Can Wait (1943), Laura (1944), Leave Her to Heaven (1945), The Razor’s Edge (1946), and The Ghost and Mrs. Muir (1947). A pretty terrific run.

But as good as Tierney is, this is Vincent Price’s movie. This was the film that set him on his road to becoming the King of Horror. It’s a dazzling performance – he makes sure that the character is both insufferable and charming until we see that he’s ultimately a delusional and dangerous threat to everyone. With Price’s hypnotic voice and imposing demeanor, he’s both a perfect romantic lead and frightening villain. When Miranda finally discovers that Van Ryn has been up to in his secluded room, it’s a great Price moment.

Other standouts here include a very young Jessica Tandy as Miranda’s feisty Irish lady’s maid, Harry Morgan as a tenant farmer, and Spring Byington as the creepy, manipulative housekeeper.

BEST PICTURE SPOTLIGHT: ONCE UPON A TIME … IN HOLLYWOOD