In 1969, Jane Fonda broke through with a searing performance as a bitter, caustic young woman in a dance marathon in They Shoot Horses Don’t They? (1969). Previously considered a light comedian or sexpot, no one expected this kind of depth from Fonda who had studied at the famous, or infamous, Actors Studio. Like everything she did, she threw herself into the art and worked hard to be the best, the very best.

Daughter of Henry Fonda, sister to Peter, in the late sixties Jane exploded into film with a sexual romp in Barbarella (1968) and the year before a superb comic performance in Neil Simon’s Barefoot in the Park (1967). But as Gloria, the doomed young woman beating away the demons of depression and rage in They Shoot Horses Don’t They?, she gave a performance that scorched the earth. Fearless, she was hailed by critics for her work, winning the New York Film Critics Award for Best Actress and received her first Academy Award nomination for Best Actress. How did she not win? Her performance remains one of the decade’s finest, one of the actresses’ best, ground-breaking for women and one of the very best ever filmed. That she did not win an Oscar is criminal as the performance of this caustic, toxic and doomed young woman remains the finest of the sixties.

Two years later Fonda was back, at the height of her fame as an actress and activist, vehemently protesting American involvement in Vietnam. She drew the wrath of the American government when, accidentally and naively she posed on a Viet Cong anti aircraft gun, a weapon used to kill young Americans. She would admit the photo was a mistake, and had she realized what she was doing, she would not have done so. 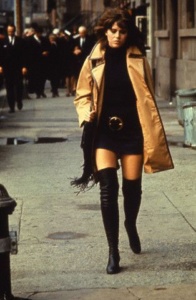 On film, Alan J. Pakula cast her in his noir thriller Klute (1971) in which she miraculously surpassed her previous work with one of the greatest five performances ever given by an actress. To be clear of the impact of her work, she did not merely kick the door open for women, she caused the door to explode off its hinges and stomped on it as she passed. Suddenly women could be as intensely realistic as men!

John Klute (Donald Sutherland) is a conservative, sad eyed private investigator hired by some friends to find a man who has disappeared. All roads lead to Bree Daniels (Fonda) a young woman trying to break in as an actress but who often takes jobs as a high-class hooker for men visiting the city. Bree is a free spirit, a tough, fearless woman with an Achilles heel, she thinks she is being stalked and terrorized by a former client.

Klute questions her and sees through the tough exterior, though Bree is not beyond trying to humiliate him. She seduces him, or tries, and he proves very strong in resisting but one night she comes to him in fear and they make love. To his dismay she treats him like a John and retreats back to her pimp, a vicious punk portrayed with icy silence by Roy Schieder. Klute continues trying to find his friend, and Bree’s stalker, but nothing is as it seems. The plot twists and turns, the growing intimacy between Bree and Klute making him more protective of her and gradually her guard drops as she allows herself to be loved.

Fonda as Bree was a revelation, a seismic event in screen acting that signalled the Renaissance of American Method Acting in the seventies. Hers was a fearless performance as she looked beautiful, sexy, slutty, dirty, tough, gutsy and finally vulnerable. With a guard up against men, it takes her a long time to be honest about her feelings towards Klute, using sex as her single power over him. Yet even there, in bed, she discovers he is unlike any man she has ever been with. Her performance is a towering achievement, one that won her every single acting award available in 1971 including the Academy Award and her second Best Actress award from the New York Film Critics Circle.  By the time the Oscars rolled around, she was widely recognized as an activist against the war in Vietnam, even on President Nixon’s hated Americans list. The Academy was understandably concerned if she won the Oscar she might use the time to lash out at American involvement in Vietnam. Instead she demonstrated humility and class, rising when her name was called, thanking those who brought the award to her.

“There’s a lot to say but this is not the time or place” she said before heading offstage, Oscar in hand to face the press. While there were many who despised her politics, no one could deny her artistry. It was believed even in 1971 that her performance in Klute was among the finest performances in film history, an opinion that is now a historical fact.

So many of the moments in the film jump instantly to mind when thinking about it. Bree walking the streets of New York, shopping, unaware she is being watched; undressing in front of Klute, daring him to look, challenging him to make her stop; reaching for Klute through the night as he sleeps on the floor; her realization of her growing feelings for Klute, sending her scampering back to her pimp; the famous moment where in the midst of making love to a John, she checks her watch; and the absolute terror in her eyes when she realizes she is face to face with her stalker and he means to kill her; all these moments are seared into your mind watching the film. And Fonda as Bree, radiating an inner intellect, always in the moment, absolute perfection. 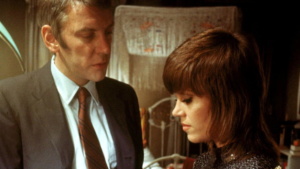 Sutherland is superb as Klute, his lumbering, hang dog appearance perfect for the role but it is the tenderness within the character that makes his performance truly great. No one is more surprised than Klute when the two fall gently in love with one another. Hardly blessed with leading man good looks it is the humanity he brings to this character that works beautifully.

Director Alan J. Pakula started his career as a producer, the classic To Kill a Mockingbird (1962) among his credits. When he made the transition to director, actors praised him as an actor’s director, an enormous compliment for him. Over the course of his career he guided Fonda, Jason Robards and Meryl Streep to Academy Awards, with Liza Minnelli, Jane Alexander, Jill Clayburgh, Candice Bergen and Richard Farnsworth nominees. His best film remains All the President’s Men (1976) but Klute remains among his most discussed.

It remains a brilliant film, and Fonda soars. 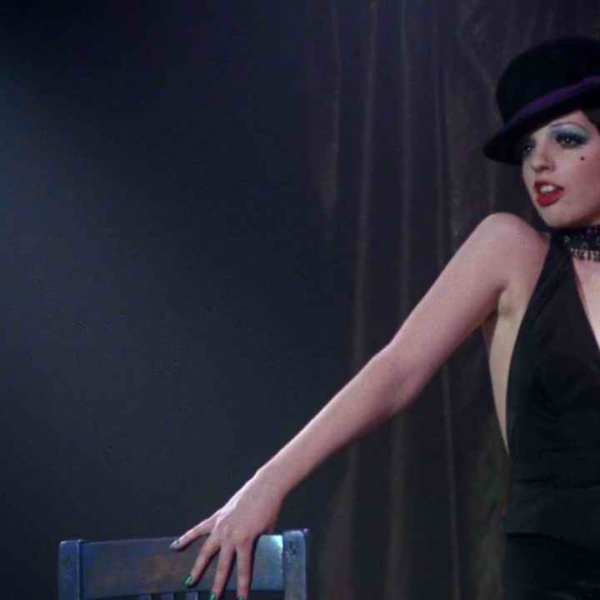 The 10 Greatest Musicals Ever Made