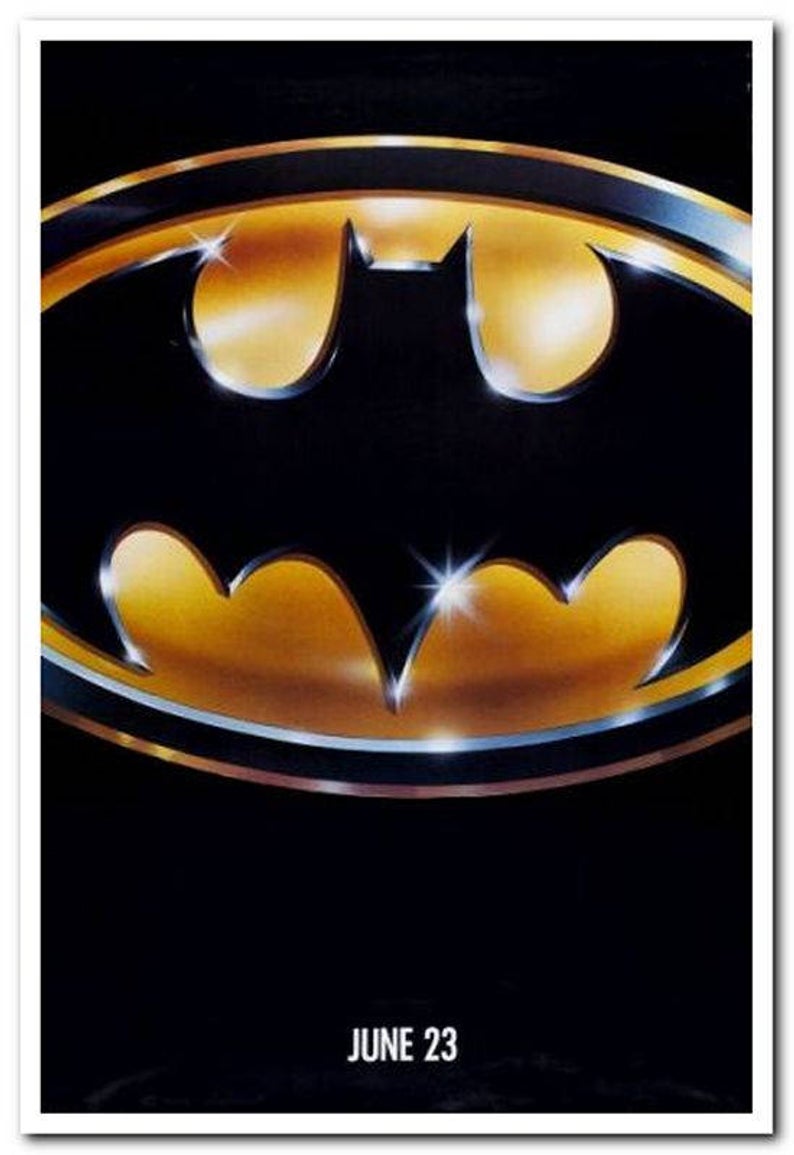 Thirty years have passed since the summer release of Tim Burton’s film Batman, which in many ways kicked off the glut of films based on comic books and superheroes we are being deluged with today. Burton was a surprise choice to helm the film but after success with Beetlejuice (1988), it was decided he was bizarre enough to make it work. With Jack Nicholson already cast as the Joker, finding the right man to play the Dark Knight was the next step. Howls of anguished protest greeted the announcement of Michael Keaton as Batman/ Bruce Wayne as he was widely considered a comedic actor, lacking the edge to portray the Dark Knight.

Warner Brothers, the producers, and Nicholson stuck by Burton’s casting of Keaton, and filming began in secret. With no internet back then they could make their film in relative seclusion. Goes to show how much has truly changed.

The marketing wizards at Warner’s began their magic nearly a year before the film was to be released. The Batman logo created for the film was soon on T-shirts, pajamas, bed sheets, posters, lunch boxes,  it was everywhere. By the time the film was ready for audiences it had become the single most anticipated film event of the year. Nothing less than a full scale blockbuster was expected, and that was what they got.

From the moment that constantly moving camera carved out the logo in the opening credits, through to the end of the film, a stunning shot of the hero high above his city, ever watchful, the film wrapped the audience in its fierce embrace. Was it good? Oh yeah. Was it perfect? No, hardly.

The big news was Michael Keaton was an excellent Batman/ Bruce Wayne, silencing his critics with a solid exciting performance. Using a gravelly, near growl when dressed as Batman, he seemed to take on an entirely new persona. Gone was the hyperactive, jittery Actor we so loved in Night Shift (1982) and Beetlejuice (1988) replaced by this ultra cool, confident man who at night works to save the city, dressed as a bat. It had been a huge risk for all concerned, but one that worked.

As expected Jack Nicholson was a revelation as The Joker. Walking that fine line of great performance and going over the top, the actor was clearly having a blast but also bringing to the screen a nasty character. In fact, so great was Nicholson’s Joker he all but took over the film. His transformation from henchman Jack Napier to the ever grinning killer called the Joker was extraordinary and the actor was at the top of his game.

What the film lacked in narrative, and it was woefully lacking, it made up for in imagery, as the images onscreen sang. Burton worked wonders with Anton Furst’s Oscar winning production design, and the pounding score from Danny Elfman. Seeing Keaton in the batsuit was indeed awe inspiring, and the actor played it beautifully. Unfortunately as Bruce Wayne, he was given little to do but romance a willing Kim Basinger and wander about stately Wayne mansion with his trusted butler Alfred. It was as Batman he truly shone.

“Did You Ever dance with the devil in the pale moonlight?” It is a great line uttered by the Joker but it means nothing to the plot. Sure it gives away Napier as the killer of Wayne’s parents, gunned down in front of him exiting a movie, but what does it mean? Why does he say it? High atop the city Batman and Joker have their final battle, and once again Joker says the line, but again, it means nothing.

At the end of the day the film proved critic proof. So-so reviews greeted the movie though Keaton and Nicholson received excellent notices. It soared to great heights at the box office, earning Nicholson over sixty million dollars based on the points he was given in the film.

Kim Basinger though lovely was wasted, Jack Palance had a terrific scene at the beginning, but no one else made much of an impression.

Nominated for a Golden Globe as Best Supporting Actor, Nicholson appeared well on his way to another Academy Award nomination for his performance in Batman. But it did not happen, just one nomination, for production design greeted the film nomination morning. The makers were crushed expecting at least eight nominations including, oddly, Best Picture.

Batman was, for Warner Brothers, a money machine, the merchandising bringing in obscene wealth. When the film came to home video, they did a sell through campaign so consumers could own their own copy, which brought in more money.

A sequel, Batman Returns, directed by Burton came in 1992, without Nicholson, bringing in Michelle Pfeiffer as a sexy, slinky Catwoman and Danny De Vito as the Penguin. In many ways a superior film to the first, Keaton was given the chance to take his character deeper. But then the actor backed away from the character, allowing Val Kilmer to wear the suit in Batman Forever (1995) which had an incredible Jim Carrey as the Riddler, and then George Clooney in Batman and Robin (1997) known as the franchise killer.

The gifted Christopher Nolan revived, reimagined and remade the franchise with his superb trilogy, Batman Begins (2005), the masterful The Dark Knight (2008) and The Dark Knight Rises (2012). The Dark Knight proved that comic book films could be art, making its way to being the very best of the genre and the best film of 2008. Heath Ledger did as Joker what Nicholson could not, he won an Oscar for his unhinged character.

Does Batman, in light of The Dark Knight, hold up? It is entertaining, but not the art of the Nolan films. Still, it is hard to forget the excitement of that first screening of Batman. Yes, Nick, I was excited.