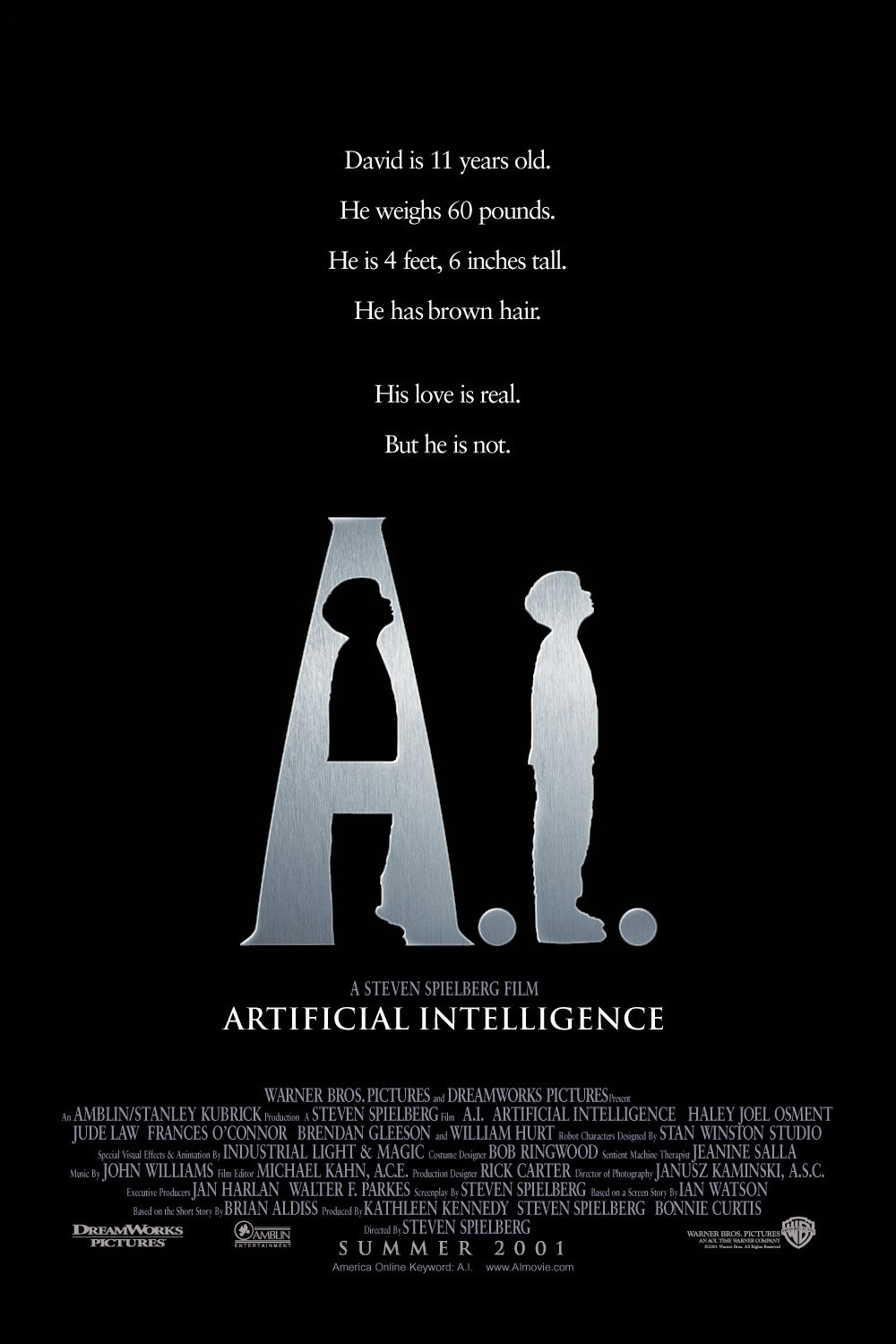 Let me state here and now, that I believe this to be among the finest, most daring films of Spielberg’s’ career and among the best five films of 2001. That it failed to find an audience is of no consequence to me, I loved it when I saw it for the first time, and each time since. There is something new to discover with each viewing, so deep is the film.

After the sudden death of Stanley Kubrick, it was revealed, to great surprise, that he and Spielberg had been very good friends, admirers of one another’s work, and Spielberg was a regular visitor to the Kubrick home in England. No one, outside of their family circle was truly aware of the friendship, and to many, it seemed strange that the two would bond so deeply. But should it? Each loved cinema, each created art, why should their friendship be a surprise?

Before Kubrick finished Eyes Wide Shut (1999), he had reached out to Spielberg to help him with a project. The older Visionary asked Spielberg to direct a film he would produce and script. They had conversations back and forth, script and notes were exchanged, storyboards prepared, the film was quietly in a state of full pre-production. But then shockingly, without warning, Kubrick died, apparently ending any chance of the film being finished.

Spielberg, to honour his friend, spoke to Kubrick’s widow who gave her blessing for him to proceed with the film.

What we have is a child of two fathers, an exquisite, demanding film with traits of both Kubrick and Spielberg. Based on the Philip Dick short story, Super-Toys Last All Summer Long, the film like Blade Runner (1982) plunge audiences into the future, a dark, cold future.

A.I. Artificial Intelligence (2001) is a futuristic tale of a time when robots have become incredibly lifelike and programmed with an ability to feel, to love. Brought home to help his wife deal with the devastating illness of their son, David (Haley Joel Osment) is a bright-eyed little thing, craving nothing more than Monica’s company and affection. The father is indifferent to the boy, seeing him as a robot, essentially a toy, and little else. But the mother feels pangs of love sweeping over her and she speaks a code that will activate David to love her and her alone. And love her he does, with every fiber (optic) of his being.

But there is trouble when her son becomes well and is sent home. The boy Martin is a nasty little fellow, who takes pleasure in hurting David or getting him into trouble. When a game Martin is playing places David in peril, he turns to Martin to keep him safe, but accidentally hurts Marvin. Unable to stop the connection between her and the boy, Monica does the unthinkable. She drives David into the woods, hands the child a toy he loves, and drives away, her only parting words being to stay away from the flesh fairs and to forgive her. Stunned, terrified and alone except for Teddy the Super Toy, a teddy bear with a deep voice who can reason, think and offer advice. Less a toy, Teddy is an artificial intelligence, Jiminy Cricket to David’s Pinocchio.

The child wanders the countryside, finally landing in trouble at a Flesh Faire, where crowds cheer as robots and artificial intelligence creations are torn to pieces for entertainment. The crowd, having never seen a child AI before howls in protest when he is brought forward to be destroyed, leaving the masters of the event to free the boy, Teddy and Gigolo Joe (Jude Law), a stud AI who ends up with David.

The boy seeks the Blue Fairy, who he believes has the power to make him a real boy, and then Monica will love him. They make their way through sex obsessed Rouge City and finally to what was once mighty New York, now beneath the sea as global warming caused the coastal cities to be swallowed up. What remains of New York are the tops of the skyscrapers that pierce the top of the water and soar into the sky.

Finally, beneath the sea, David comes face to face with the remnants of Coney Island, where a statue of the Blue Fairy stands. When she falls trapping his ship, he is stuck under water for a thousand years. Mankind dies off, leaving AI’s, or mechas as the only living creatures on the planet. Hacking through the massive walls of ice they find David, frozen, held in place by the crumbling Blue Fairy, which disintegrates once moved. David is recharged by these master mechas, who are thrilled to find the last connection to mankind. Downloading his mind, they understand what he wants and somehow are in a position to give it to him, using Monica’s clipped hair to do so.

For twenty-four hours a creation of Monica is there with David, to love only him, to pay attention to only him, for an entire day she belongs to him entirely. And at the end of that blissful day, she tells him she loves him and forever goes to sleep. And beside her, for the first time, David’s eyes close.

The film was born of two directors, and though you can feel the dark presence of Kubrick, this is very much the work of Spielberg, and though chilly, even remote it is among his greatest works. In the years after winning the Oscars for Best Director, Spielberg seemed freed of that burden and dared to go where he had never gone before.

A. I. (2001) is a masterpiece, already being discovered by a new generation for the unsettling work of art it is. Audiences in 2001 did not know what to make of it, and despite strong reviews, the film was not the huge success expected.

Haley Joel Osment has been a sensation as the boy who sees dead people in The Sixth Sense (1999), even earning an Oscar nomination for Best Supporting Actor. The hushed terror he brought to the role did not go unnoticed, and his work in that film drew Spielberg to the young actor and he was cast as David. Osment brings something otherworldly to his performance, the manner in which he moves, watches, taking everything in, mimics, observes, never blinking. With his eyes constantly open he learns as he goes until Monica programs him to love her. You can see a visible change in David when this happens, he somehow becomes more human (if that makes sense)? The abject fear he feels when she abandons him in the woods is very real because the outside world is entirely new to him. Yet he watches, he learns and he listens and learns more. It is a splendid performance from Osment, who as an adult has never shown the astonishing talent he did as a child. A nomination for Best Actor would have seemed fitting.

Jude Law brings a jaunty brash confidence to his role as Gigolo Joe, a pleasure me Ha built to servicewomen and send them soaring into orgasmic glory. With a quick cock of his head, mood music comes up, and his seduction begins. When he encounters David he knows the child is in “big trouble” which he dreads, so he helps him. Interesting that the mechas often have more humanity than the humans! Law gives his character a sense of Gene Kelly in his movements, and his smiling good humour suggests Malcolm McDowell’s Alex in A Clockwork Orange (1971). Wildly entertaining, something profound is lost when he exits the narrative.

As the creator of David, William Hurt brings a wounded sadness to his performance. We learn his son David died as a child, and he created the David toy to replace his son. Hurt is exceptional in a small but crucial role.

Robin Williams and Meryl Streep each do voice work in the film, each very good as expected.

Spielberg’s direction is as always bold and confident, taking both David and the audience on a journey into this futuristic world. The art direction is sublime, and the effects spot on.

But it is the actors that give the film that inner life all films need.

Much was made of the ending, audiences confused the futuristic mechas, thinking them aliens, while others felt the ending was an add-on by Spielberg so the film avoided a bleak Kubrick style ending. The film ended exactly as Kubrick intended, the younger director paid the greatest of compliments to Kubrick by filming the story as he had intended.

In doing so, Spielberg again evolved as an artist.

As the years slip by, I believe audiences will come to appreciate A. I. (2001) as one of the greatest science fiction films ever made. Hell, it was upon release. 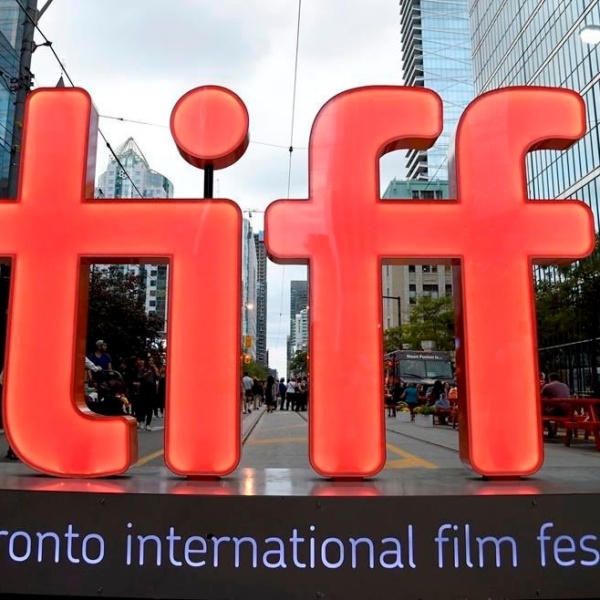 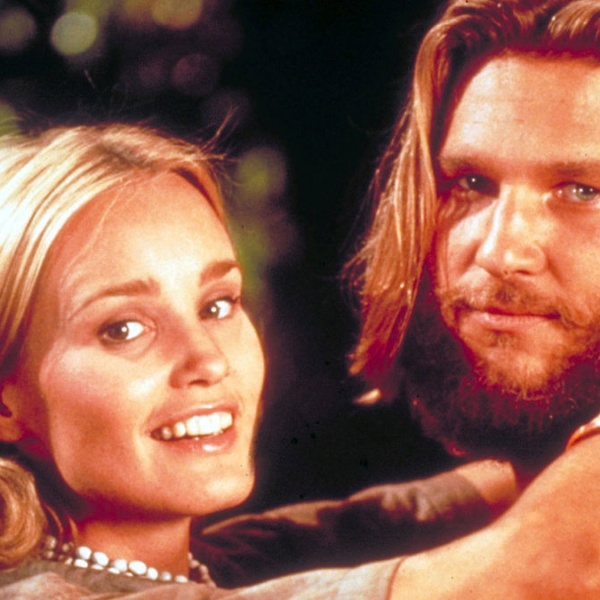