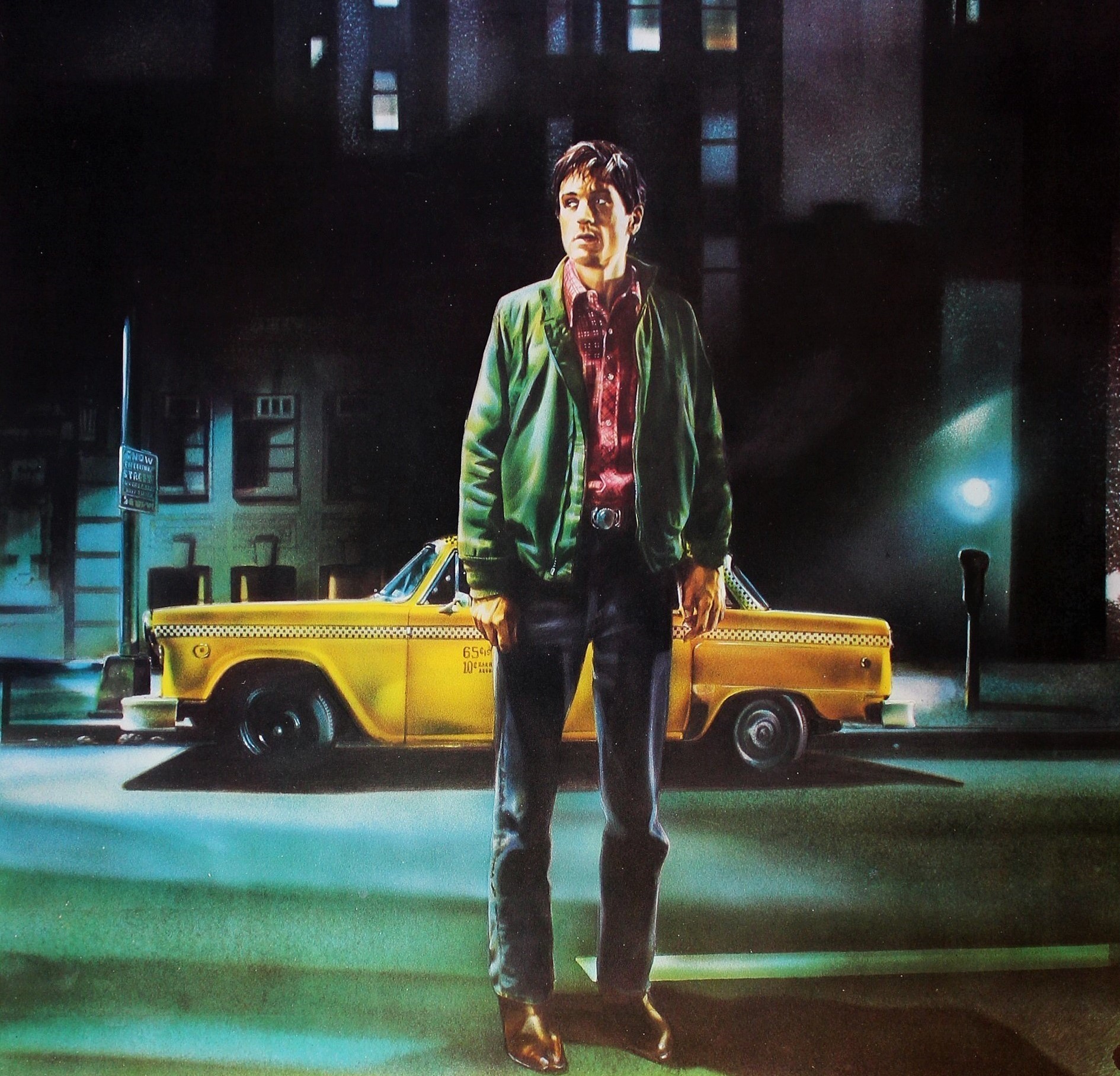 In 1976 I was aware of Martin Scorsese as a filmmaker having seen Mean Streets (1973) and Alice Doesn’t Live Here Anymore (1974), and certainly a fan of the actor on the rise, Robert De Niro who had just won an Oscar in The Godfather Part II (1974). Their new film Taxi Driver (1976) opened at the Odeon Theatre and I headed down Saturday afternoon to see the movie. There might have been twenty other people in the audience, no couples, so I knew right away this was a film for movie people. 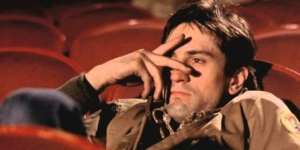 I exited that cinema different than when I went in. Galvanized. Stunned.

Taxi Driver (1976) one of Scorsese’s greatest and yet darkest film is forty-two years old. yet does not feel as though it has aged a single year, still as topical, urgent and as powerful as it ever was. In its own unique way, it is a descent into hell with a dark character guiding us through like a dark angel, showing us the madness he sees, without ever knowing the true madness is him.

The opening shots were a dead giveaway to what we were going to explore. A manhole covering, steam pouring out it, like hell being held back by man-made steel. This was New York City before Guiliani cleaned it up when Times Square was a haven for hookers and pimps, drug dealers and the homeless. It was an open sewer for the worst of humanity. It was as though hell itself was just beneath the city, waiting for the chance to burst through from the bowels of the earth.

The first time we see Travis Bickle (Robert De Niro) we know, inherently, something is off. We can hear it in his voice, feel it in his movements, the way he connects (or does not) to those around him, something is deeply wrong with Travis. He is a Viet Nam veteran, a former marine who did his time in the war and has come home to a country he does not understand and that makes no effort to understand him. There is something predatory in him we sense, the movement, the watchful eyes, taking all in around him. Travis wants to drive a cab, all night if he can because he does not sleep, and in the day when he cannot rest he goes to pornographic movies and peep shows. He becomes obsessed with the filth in the city, hellbent on cleaning up the streets. When he meets a campaign worker for a senator, they date, but his lack of social graces ends it when he takes her to a pornographic film on a date. She rebuffs him and causes him, partially to break from reality. When he encounters a twelve-year-old hooker, Iris (Jodie Foster) his plan comes to fruition.

When his attempt to assassinate the senator fails he goes to find Iris and murders her doorman, then her pimp, and then any of the many men standing watch over her. It is less a killing scene than an absolute slaughter, as Travis goes through the men like a knife through butter. As the police arrive he holds a finger drenched with fresh blood to his head like a gun and pretends to pull a trigger, which is what he has wanted all along, death, therefore escape. His own twisted sense of salvation. Is he asking them to shoot him? Daring and taunting them? Perhaps. 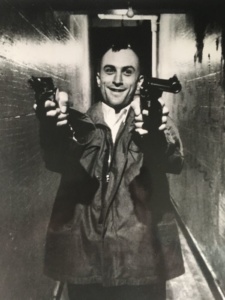 Having saved Iris, and returned her to her parents in Minnesota, Travis is elevated to the status of hero. Those he killed were responsible for using a twelve-year-old as a prostitute and living off the money she brought in. The men he killed needed killing, deserved exactly what they got. Yet we know too much about Travis, we know the moment his assassination attempt on the senator fails his blood is boiling, he needs to have released. Like sex he has built to a climax that did not come, and needs it, cannot be without it, so he systemically wipes out those using Iris. His wounds were terrible, as he too was shot several times, but he recovered and is soon back driving a taxi. On one night he is flagged down, and into his car steps Betsy, the woman he dated for a time, who turned him down who refused to take his calls after the porno movie.  They make small talk, and though she wants more from him, he is done with her. We sense something within in her has changed towards Travis, and she would not turn him away if he asked her. But he wants no more to do with her. When she gets out of the car we watch him drive into lights and sounds of the city at night and catch a glimpse of his eyes in the rearview mirror….and know he will do it all again, once again he is a time bomb waiting to go off. He is again ticking, again dangerous.

Taxi Driver (1976) was one of the most alarming films I had ever seen at that time in my life, I was seventeen, and incredibly forty-two years later, has lost none of its visceral power. It is just as intense and frightening as it ever was, an absolute masterpiece that walks through the landscape of a man’s mind as he descends into hell, a hell of his own making.

De Niro is superb as Travis, portraying the character with an intensity that is alarming, he is a walking hand grenade with the pin pulled. We wait for him to go off because we know it is coming, and when it does we cannot quite believe what we witness. Travis is dangerous from the beginning because he is unpredictable and feels out of touch with life, with everyone in the teeming city around him. The only person he connects with at all is Iris (Jodie Foster) the young hooker he saves, though she did not need saving, nor did she really want it. In Iris perhaps Travis sees the last bit of innocence in the city is ruined and he can no longer bear it and lashes out in rage. When the assassination fails, he has to do something with his anger, he needs to explode, and that is what he does in a sequence filled with some of the most alarming and realistic carnage put on a screen up to that time.

We can all but feel De Niro seething, his rage simmering, until finally he can longer bear it and must go off. When he does, it is almost orgasmic in its feeling, and I am sure felt that way to Travis. It is a performance of dark, terrifying intensity, superb on every level, so much of the performance through his eyes.

Equally good are the superb Jodie Foster as Iris and Harvey Keitel as a jittery, always bopping pimp, high on coke likely, surprisingly dangerous on his perch on the street. Peter Boyle does fine work as Wizard, a veteran cabby Travis goes to for advice but proves no help, and Cybil Shepard at that time in her career kind of a laughing stock is fine as Betsy, the girl of Travis dreams. 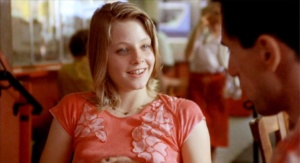 Taxi Driver (1976) was nominated for four Academy Awards, Best Picture, Best Actor, Best Supporting Actress, and Best Screenplay. Further nods should have come for Scorsese (no brainer), the score, cinematography, and editing. The film earned De Niro Best Actor awards from the New York and LA Film Critics Groups as well as the National Society of Film Critics, establishing himself as the most exciting of his generation.

Scorsese prowls New York like a ghost, his camera capturing the hell that was New York at night in the seventies. They fearlessly shot at night time, when the worst in humanity was out, and they captured that on film. The single shot of a manhole cover seen with hot steam billowing out, as though hell itself were being held back ever so slightly is genius. But the greatest weapon Scorsese wields in the film is De Niro’s eyes, sometimes haunted, sometimes afraid, sometimes dangerous, and finally murderous. The hero we see at the end of the film is a nightmare in disguise because in the very near future Travis will arm himself and walk into the streets again and open fire.

Underneath it all is that stunning Bernard Herrman score, mostly horns, and percussion, powerful, haunting.

Watching the film is a reminder of what a truly brilliant actor Robert De Niro once was, and we mourn what he has become in garbage such as Dirty Grandpa (2016), the worst film of his career. Instead, embrace what he once was.

The film set Martin Scorsese apart from all the other directors of his generation in that he was a director willing to take risks, willing to explore the darkest aspects of the human mind. Searing in its content, the film scorches the earth with what it is saying, and De Niro is nothing short of astonishing. Very much a directors film it now seems criminal he was snubbed for the Oscar nomination as Best Director, especially since he was nominated by the Directors Guild of America as Best Director. Scorsese has made many films since, but only a few remain greater than Taxi Driver (1976). Arguably they are Goodfellas (1990), Raging Bull (1980), The Wolf of Wall Street (2013) and his Oscar-winning The Departed (2006). He evolved from this into one of the greatest of American directors.

Taxi Driver is a staggering study of a descent into utter madness, a profoundly disturbing study of urban alienation, and a seething portrait of psychosis.

It is also a dark work of art.