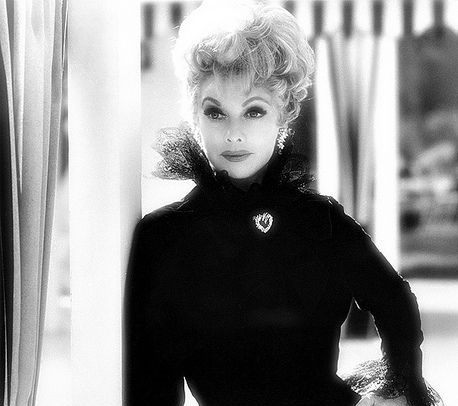 Will the Aaron Sorkin scripted bio of Lucille Ball ever hit the big screens? Announced a while back with Cate Blanchett on board to play the famous redhead (and with the participation of both Lucy’s children), it seemed like the last century’s best comedienne was finally going to get the respect she deserved in a Hollywood produced bio pic.

Aside from two exploitive (and inaccurate) TV films, Lucy’s legacy has been left to the endless re-runs of her TV sitcom, a few books, and a well-produced documentary that daughter Lucie Arnaz pulled together using home movie footage and interviews with family, friends and contemporaries of Lucy’s.

Although not too many details have been released regarding the untiled Lucy film, the proposed casting of Blanchett would seem to indicate that the focus would be on her later television success which she achieved after 40 and also on her marriage to Desi Arnaz.

There are two distinct divisions in Lucille Ball’s career. The most prominent: the TV juggernaut of I Love Lucy that, from 1951 onwards, made her the most beloved and famous entertainer of the era. That’s a position she retained through each of her TV incarnations in the 60s and 70s, despite a gentle but pronounced slide in quality with each progressive format.

The other, less heralded part of Lucille Ball’s career was her work in films. Her first was in 1933 with chorus work in the Eddie Cantor film Roman Scandals (1933). She continued through 70 plus films until I Love Lucy, and then sporadically after that with some major hits, a few misses, ultimately ending with Mame (1974) – the film that was supposed to be her crowning achievement but changing times, age and reality had other things in mind.

It was a steady build for Lucy in the 1930s – bit parts, then a couple of lines, some featured roles and a couple of breakthroughs that lead her to being labelled “Queen of the B’s” at RKO Studios. Her best chances in those early years were in Stage Door (1937) where she more than held her own with the films leads – Ginger Rogers and Katharine Hepburn. This performance in particular showed an effortless, casual style and that she could easily handle comedy. The same is true her next big chance in Five Came Back (1939). One of the great B films of the era (and a precursor to the disaster flicks of the 70s) Lucy nails it as a girl with a “reputation” not appreciated by the others – at least at first. The modern, everyday approach she exhibits here is so different from the personae that would so define her later work.

In the 1940s she started getting leads – not always in “A” pictures but she delivered good, solid work in a number of films. Three of her best performances are in Dance Girl Dance (1940), The Big Street (1942) and Easy to Wed (1946). Dance Girl Dance should have netted her an Oscar nomination for best supporting actress that year – she’s a tough, funny, night club dancer with no illusions about her talent or life. It’s a really good piece of work. The Big Street was known to be her favorite performance and it’s easy to see why. It’s a big part with comedy and dramatics and she gets to play bitchy for the first time and she’s spectacular. The plot of this one is not always believable, but she and co-star Henry Fonda sell it. Easy to Wed is an early Esther Williams vehicle and a remake of Libeled Lady (1936). Lucy has the role played by Jean Harlow in the original and she makes the part her own. A really smart screwball comedy performance that’s the best thing in a routine movie.

Once the TV series took off, films were not the priority. But there were a couple of winners. The Long, Long Trailer (1954) is a good comedy directed by Vincente Minnelli that was a big hit for MGM. It wasn’t a big stretch for her – she’s essentially playing a variation of Lucy Ricardo from I Love Lucy – but the laughs are definitely there.

The Facts of Life (1960) is one of her top performances, a surprisingly adult comedy with Bob Hope where they are both acting their age in a relatively thoughtful look at adultery. Lucy’s is the better performance – not a trace of Lucy Ricardo, just a slightly bitter, middle-aged woman looking to feel better about her life and herself. I would have included her in the five nominees for Best Actress that year … she’s that good.

The one other film success she had in the 60s is Yours, Mine and Ours (1968), filmed during the run of her second hit TV series The Lucy Show (1962-68). Yours, Mine and Ours is a typical family comedy of the era – sunny, cute, no real mention of the turmoil going on in America at the time. A nice film and a major hit. It also contains the best example of Lucy’s comedic art ever put on film. The premise has her as widow with eight kids and Henry Fonda (again) a widower with 10. They meet, fall in love and it all plays out with few surprises. When Lucy’s character goes to meet Henry’s kids for the first time, they try to get her drunk by spiking her “light” screwdriver with vodka, scotch and gin. She gets hammered, tries to pretend she isn’t, and dinner is a disaster – but it’s also hysterically funny. Lucy switching from tears to laughter to tears and then back again as she’s trying to figure out what’s happening is perfection. For Lucy, being a star meant being a movie star. She had achieved more fame on TV that anyone before or since, but there was probably always something nagging inside about never being able to achieve the level of cinematic success of some of her contemporaries, such as Bette Davis, Ginger Rogers, Barbara Stanwyck. Never mind that by the early 70s those three ladies were only working sporadically and their best film opportunities were a memory – Lucy was still going strong as a fixture in the Nielsen top 10 with Here’s Lucy (1968-74).

But she wanted to headline a big movie, she wanted to look gorgeous and do all the things she thought she was still fully capable of doing – and she probably wanted the ultimate movie star recognition of an Oscar. But Mame (1974) wasn’t the vehicle for that. It might have been in the early sixties, but by 1974 big musicals were passé. She was never a singer or dancer who could match Judy Garland or Doris Day, but she could move, she was definitely musical and she had style. That’s why you would always see musical numbers at some point throughout all of her TV series. The combination of Lucy/Mame was something that producers – and Lucy – thought they could pull off and sell.

There are good moments, particularly when the script veers to slapstick and Lucy shines. But two things do her in – a botched recording of the soundtrack that feels like it was pieced together and a soft focus in all of Lucy’s medium shots and close-ups that’s distracting. There’s nothing wrong with Mame looking like she’s in her early 60s, but the filmmakers (and I’m guessing Lucy) wanted her to be 40. Add to that sloppy direction and not always flattering period clothes, it was inevitable that Lucy and Mame would be tarred and feathered upon release. The actress received some of the meanest reviews ever and it wasn’t deserved. She was naturally devastated so she retreated to the comfort of the occasional TV special or guest appearance until she died in 1989. Outside of Stone Pillow, a made for TV film shown in 1985, there was no more film work. 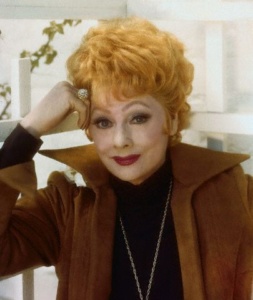 Every major career has roles that they didn’t get that they should have, roles they were lucky to have avoided, and others where they weren’t even in the running. Given the luxury of time and hindsight, these create some tantalizing “what if?” moments.

The first big one that got away from Lucy was Ball of Fire (1941). Turned down by both Barbara Stanwyck and Ginger Rogers, Lucy was supposedly set for the part and then Stanwyck changed her mind and got an Oscar nomination.  A fun, brassy comedy, it would have been the ideal showcase for Lucy at that time (and she would have matched up well with Gary Cooper). But it was not to be.

Instead, RKO kept pushing her into a series of low budget B movies.

She was under contract to Columbia Pictures in the late 1940s so she automatically found herself being considered for Born Yesterday (1950), which was to be filmed by Columbia. I think this one would have been a mistake. Judy Holliday had played the part to great acclaim on Broadway and owned the part – and Lucy was never a typical “dumb blonde” comedian.

The third big one was The Manchurian Candidate (1962). One of the great films of the era, star/producer Frank Sinatra had suggested Lucy for the malevolent Mrs. Iselin, but director John Frankenheimer wanted Angela Lansbury, having just worked with her on All Fall Down (1962). It’s a great part and Lansbury is wonderful. But at this point in her career, Lucy had just gone through a divorce, an unsuccessful Broadway musical, she was running a major studio and had turned 50. Frankly settled more into middle-age than Lucy Ricardo was allowed to, a certain toughness was starting to show – and the mind jumps at the thought of a good director using that and guiding her to something no one would have expected.

And maybe that’s not a bad thing. We’re left with some spectacular television, some really strong film work and a legacy that still shines. 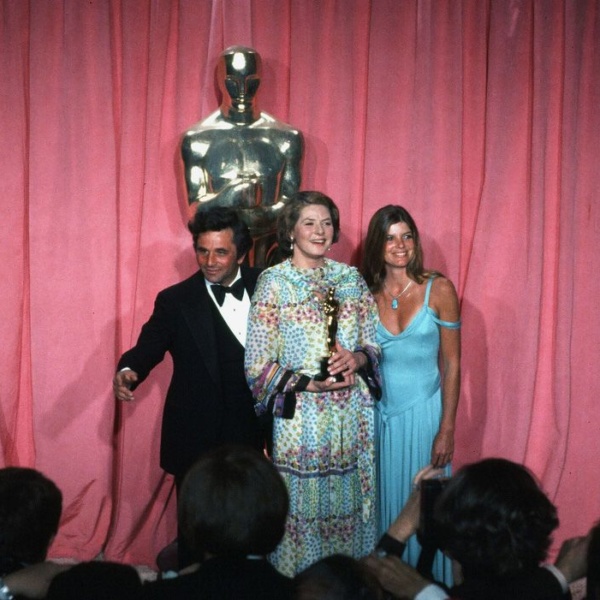 10 Times Sentiment Triumphed at the Oscars