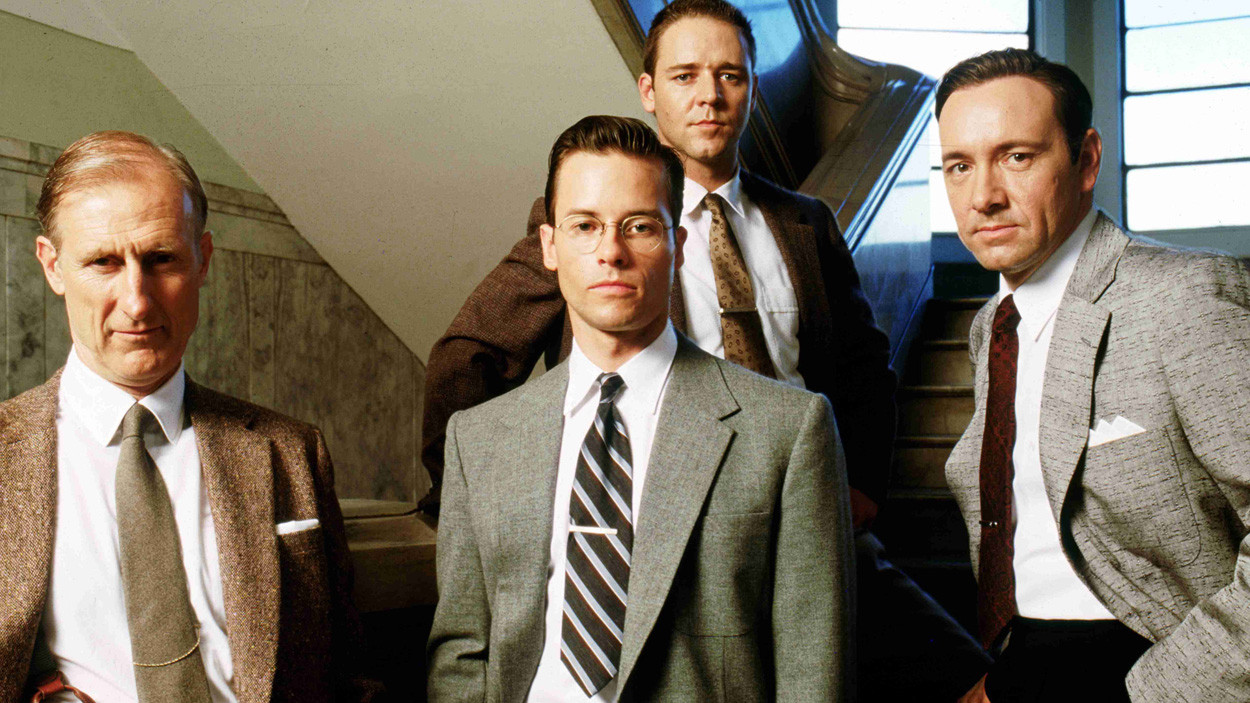 And back to the counting down of the greatest films of the nineties, we are almost there. The Oscars interrupted us! 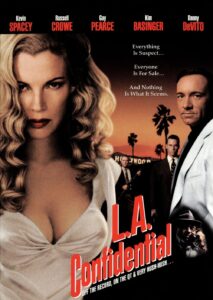 At the end of 1997, while audiences were lining around city blocks to see Titanic, James Cameron’s massive love story set aboard the doomed ship making its first Atlantic crossing, film critics were honoring one film as the year’s best. Not since Steven Spielberg’s Schindler’s List (1993) had a single film so dominated the Best Film prizes from the nations film critics. Best film awards came from the Boston Film Critics, the Chicago Film Critics, the Los Angeles Film Critics Association, the New York Film Critics Circle, the National Society of Film Critics, each group esteemed within the film industry for their annual prizes. The film was Curtis Hanson’s masterful L.A. Confidential, a neo-noir set in the fifties, exploring police corruption and the many types of policeman there truly are.

“Rollo Tomasi” whispers a dying detective, shot by his superior officer when it becomes clear the younger man has linked a murder case to that same superior. The name was given to the mysterious man who shot the father of studious cop Edward Exley (Guy Pearce), a young, honest cop on the rise who plays strictly by the book, though he finds that is getting him nowhere in terms of being a detective. His father was a beloved and decorated policeman known for his honesty and integrity and because his killer was never brought to justice, this was the name the boy assigned his father. He tells a single person this name and that single person, shot and dying, whispers it was his killer, perhaps knowing, or hoping the name will get back to Exley and he will know who killed his friend. As the dying detective speaks the name, you can almost see a small smile gather on his lips as he knows he has nailed him with the name. The older cop will not be able to be quiet about the name “Rollo Tomasi”. It will be his undoing.

This was a magnificent film experience. Every single craft and artistic decision within the film worked, it was a pleasure to watch and the moment it ended all I could think about was seeing it again. This is why I love movies, films like this ennoble the art form, remind us of why we love going to the movies.

In 1997 at TIFF I sat transfixed watching L.A. Confidential, a massive film noir, sprawling police yarn superbly acted and crafted. Set in Los Angeles in the fifties, when television was kicking the film industry around like a whipped dog, the film is a stunning, lurid, big piece of dark candy with a dark center. By the end of the screening, after the applause had died off, it was clear the press had just seen the year’s best film, and an absolute masterpiece for the ages.

Like Chinatown (1974), this film was carefully put together, beautifully written, directed with perfect precision, acted incredibly well, superbly edited with just the right amount of twists and turns to make it shocking and shockingly believable.

With a huge cast of characters who all come crashing into one another somehow over the course of the film, there was not a false note, nor a single weak performance. Even now, looking back on what Kevin Spacey became, his career in tatters over sexual predator allegations that have ruined him, it is difficult to watch his performance and not be impressed with him as an actor. He approached his character, detective Jack Vincennes, as though he were portraying Dean Martin – cool, smooth, a real operator. Jack was a great cop once, but now he gets a bigger thrill out of being technical advisor to a popular television show that has made him a minor celebrity. He also feeds a sleazy photojournalist, the term used loosely, portrayed superbly by Danny DeVito who operates an exploitive rag focusing on all that is ugly in Hollywood, talked about quietly but rarely seen. He feeds DeVito stories of busts going down, so the creepy photographer is there at the right time for a photo op.

James Cromwell is police chief Dudley Smith, a seemingly honest, though brutally honest father figure to the young cops, hoping to make sure they will do everything possible to get a collar. Bud White (Russell Crowe) is Dudley’s kind of cop – a brawling bruiser who cannot stand to see anyone mistreated and isn’t above breaking the rules to make a collar. What Dudley does not count on is that Bud has integrity. Though Bud despises what Exley might be, he will team with him to go after the corruption within the department because in their heart of hearts each believes a policeman should stand for a certain thing.

Kim Basinger had the role of her career as Kim Bracken, a high-level prostitute who had her face altered to look like Veronica Lake. She is part of ring of prostitutes run by a wealthy businessman, portrayed with elegant sleaze by David Strathairn, hookers cut to look like movie stars. Bud White falls for her and she for him, but their life seems impossible as it is.

And Danny DeVito is all sleaze and corruption as the editor and publisher of “Hush! Hush!”, an exploitive magazine spewing out the worst kind of news with the help of Vincennes. One of their scams is to frame an up-and-coming young actor, which goes horribly wrong when the young man kills himself, leaving Vincennes shattered and finally questioning why he became a cop. He digs deep into himself and becomes one for a limited time, before he is found out having connected the dots.

Despite the huge storyline, the depth of the narrative, L.A. Confidential moves along with a breezy speed, partly because it is so damned enjoyable. The actors are never anything less than superb, and the direction is pristine, perfection.

Yes, it is a jolt to see Vincennes shot dead in the kitchen of a man he trusts, a man who is supposed to be a beacon of honor and trust, but it throws the audience off enough for us to stop and think things through. Just like that nothing is as it seems, no one is safe, no one is really a good guy. Very slowly the corrupt officers work their way through those who might be onto them, killing one after another, so the Night Owl murders cannot ever be connected to them.

The performances are uniformly perfect from Kevin Spacey’s cool Jack, enjoying his limited celebrity as technical advisor on a major TV show called Badge of Honor. He moves with a sense of confidence you just cannot take your eyes off him, and even when setting up a bust, damned if he does not make it sound real for the cameras. It was a wonderful performance that, after The Usual Suspects (1995) and Seven (1995), stamped Spacey as one of the major new film actors of his generation.

Russell Crowe was astonishing as Bud White, a true tough guy who hates bullies and injustice. He is the kind of guy who might see a woman sporting a black eye and goes after the guy she is with to make sure, with absolute certainty, that he did not lay a hand on her. Radiating danger, Crowe exploded across the screen and within a year was among the most sought-after actors in movies. Like Crowe, Guy Pearce hailed from down under and had earned rave reviews for his work in Priscilla, Queen of the Desert (1995) as a drag queen. Here he is owlish in his wide-eyed glasses, taking in the corruption around him with a quiet disbelief, taking the insults lobbed his way because he turned on a cop, but wanting to prove himself to be as good, as honest as his father. And James Cromwell, smugly watching over the department, running the corruption quietly, distancing himself so to never be caught, never counting on a made-up name to be his undoing.

In a role that won her a well-deserved Academy Award for Best Supporting Actress, Kim Basinger is haunting as Lynn. Arriving in L.A. with a dream, she quickly found out she did not have the goods to be in movies, so she survived another, a way that her beauty permitted. She is as surprised as anyone by Bud and her love for him but watching their love affair was a thing of beauty. Basinger was truly great in the film, and only great one other time on screen, as the broken wife in The Door in the Floor (2004).

The film was nominated for nine Academy Awards but could have stood to have two or three more. Basinger was the only actor nominated, when frankly Spacey, Cromwell and Crowe deserved nominations for Best Supporting Actor. L.A. Confidential was one of the greatest arguments for the Academy to create an Acting Ensemble Award but it still has not happened. None of the men were nominated, making Basinger’s accomplishment all the more exceptional. In this dark noir she stood out like a ray of sunshine, of hope, of a dream come real. Going into Oscar night the film had collected all the Best Picture prizes from the various critic’s groups, but Titanic was sailing strong with audiences, looking truly unsinkable. On Oscar night, there was no iceberg to sink Titanic and it cruised to 11 Academy Awards while L.A. Confidential took home two, for Basinger and for Hanson for his screenplay adaptation of the massive novel by James Elroy. It remains a startling injustice, but I get why Titanic won. Hollywood was beginning to fear the independent cinema which was moving in on the Oscars and the studios finally had a big studio produced by two old studios in the Best Picture race. How could they not honor what James Cameron had accomplished?

Curtis Hanson never again had a film of this magnitude released, though Wonder Boys (2000) earned him solid reviews especially for the performances of Michael Douglas and Tobey Maguire. Like Chinatown before it, the film joins the ranks of the greatest film noirs ever made. Hell, it might just be the greatest. 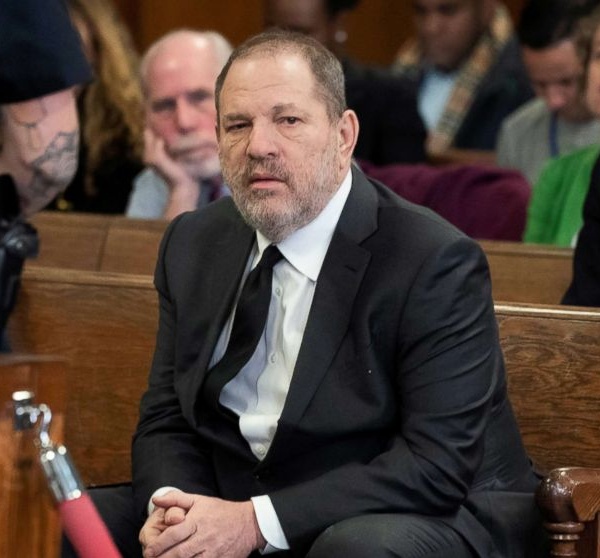 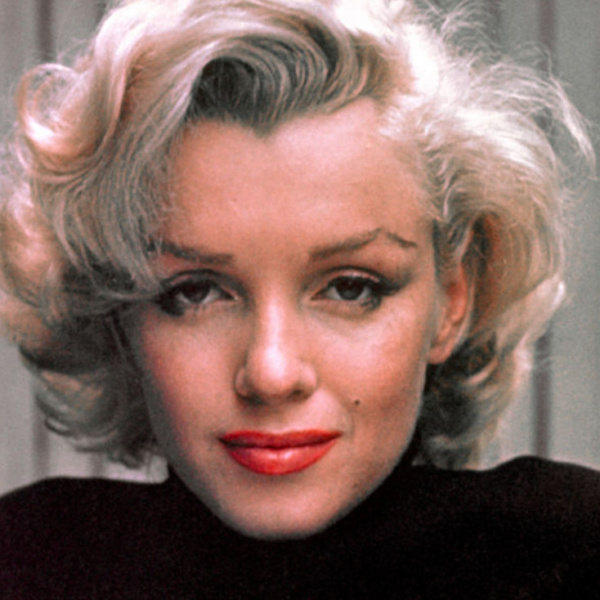