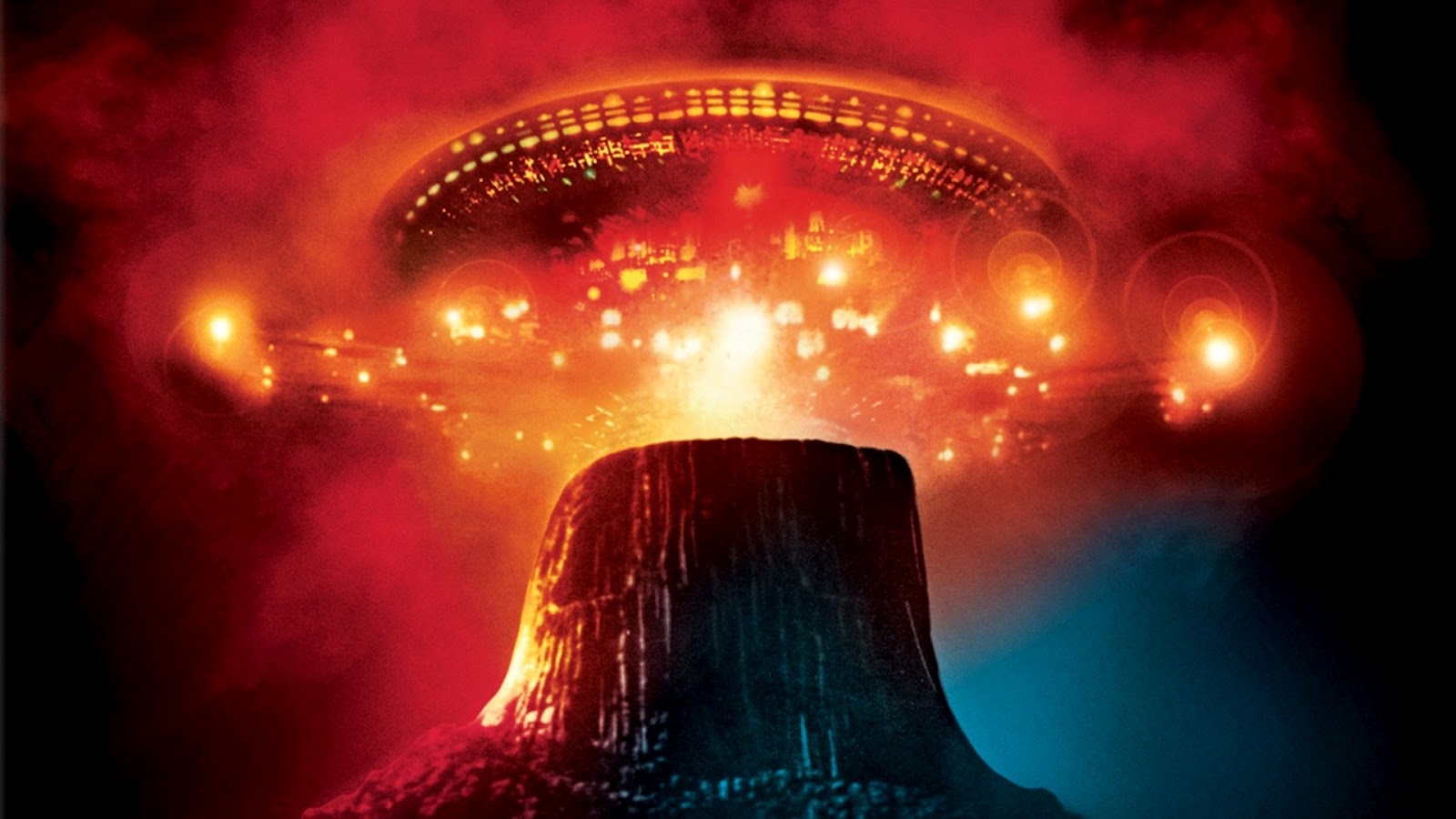 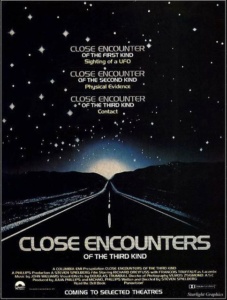 Walking out of this stunning film after seeing the first showing in Toronto, my brother and I overheard a woman speaking to the TV crews who had gathered to catch the reactions of the awed audience members. We heard her say with absolute conviction as tears streamed down her face, “It was like seeing God.”

I could not have described the film better than she did at that time. The last 45 minutes alone presented some of the most majestic, awe inspiring scenes and effects we had ever seen in a film. But the greatest accomplishment of Steven Spielberg’s superb film was the humanity he infused his film with, a huge, epic science fiction film to be sure, with heart, soul and emotion in every frame.

Mankind has always looked to the stars, believing there must be something more out there, perhaps a world better than ours, advanced further along than ours and blessed with having found how to live in peace. Many believe aliens were regular visitors thousands of years ago, I among them, but for some reason they stopped coming. Why? Did they finally get tired of what mankind was doing? Declaring war on his brothers? Who knows, the point is if they were regular visitors, they are not anymore, at least not that we know of. Do they visit, I believe they do, and I believe the government has long known about it. Yes, I believe in Area 51, and yes, I believe in government cover up.

To make this film, Spielberg had the co-operation of SETI, a government agency, Search for Extraterrestrial Intelligence, and the young director was shocked that they agreed. Working with experts on UFO’s, men who were breaking security by discussing what they knew, what they had seen with Spielberg, they gave the film an authenticity many films before it did not have. The build up to the actual contact made by the aliens rushed like a freight train to the scenes at Devil’s Tower in Wyoming.

Objects begin to be found in the most curious places; things that had disappeared long ago, quietly dropped into place as though borrow. A lost squadron of planes which had gone missing in WWII show up in the desert near Mexico, a freighter dropped in the middle of the desert, and visitations happen. An old Mexican man who had witnessed a visitation says, “the sun came out last night, it sang to me”. In fact a group of ordinary Americans witness a visitation, and something is implanted in their minds, a clue, an image that they cannot shake. And the music, those five notes, from the child playing them on his toy until he gets them right to the men at the United Nations discovering exactly what they are for.

Roy Neary (Richard Dreyfuss) works for the power company and is out fixing lines when he has an encounter. Stopping at a set of train tracks for directions, a set of lights come up behind him and he waves them on. A second set arrive behind him and he again waves them on, but they go up. Suddenly his truck is suddenly bathed in an impossible light. He looks out and up and is sun burnt by the intensity of the lights as the craft moves over him and down the road, leaving him in some sort of trance that he snaps out of, and begins chasing what he has seen. And he is not alone. Hundreds of people see them, experience whatever happened to Roy, but perhaps not in the same depth.

He cannot shake the image, drawing it everywhere, comically sculpting in his potatoes, and finally sculpting a massive, incredibly detailed version of the mountain in his living room after his wife and kids have left him, thinking him insane.

In the meantime, the aliens have returned and taken a little boy with them, landing outside his home, and taking him from his mother’s arms, leaving her to tell the government who think her mad. Only Roy believes her, and when they both make the psychic connection to Devil’s Tower in Wyoming that is where they and hundreds of others go, implanted with the same image.

It is there the contact will happen. A first contact of a UFO is sighting; the second, physical evidence; and the third, actual contact. We go through all of them over the course of the film, though the most extraordinary is contact. Gathered at the mountain are the military (of course), representatives from NASA, SETI and the United Nations led by Claude Lacombe (Francois Truffaut) a gentle little scientist who figured out what was happening and how it would come to pass. Roy and his friend Gillian (Melinda Dillon) manage to escape the military and run up the mountain, staying ahead of the choppers spraying sleeping gas at anyone attempting to get there. Lacombe roars in protest “Let them go! They were invited!”

Once at the top a stunning site greets them – a landing strip with all sorts of technology, all manned by experts in their field. Looking to the skies it begins.

Hundreds of crafts descend on the to the strip, flashing lights to the skies that seems to be calling for something to come. A low rumble begins and from behind the massive mountain rises a craft – huge, larger than the mountain itself, its lights looking a massive city. Higher and higher it rises until it is above the mountain, dwarfing it is size and then it turns a full 180, and lowers itself to the strip, hovering above it. Back and forth the musical notes are played, their way of saying hello, until the aliens lock on the signal and take over the conversation. The bottom of their craft opens in a blast of intense white light and figures begin to emerge. Looking stunned and bewildered, the pilots of the lost WWII flight emerge, having not aged a day, and shadow after shadow comes out, a silhouette suggesting Amelia Earhart and finally Gillian’s little boy Barry (Carey Guffey) runs into his mother’s arms. Closer and closer Roy edges to the ship telling Lacombe “I just want to believe it is really happening.”

Pulled away from the event Roy is briefed by SETI and asked by NASA to do something extraordinary. He will join a group of astronauts on their journey with the aliens to wherever they came from. 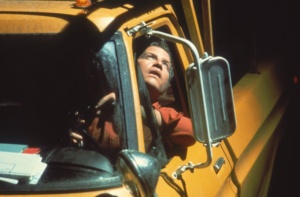 The aliens descend the ramp from their ship and make themselves known. Long, lithe is the leader while the rest are tiny, like children really, and they immediately approach Roy who has joined the line. They take him to the ship, where he glances back one last time, knowing he is leaving behind everyone he knows for a trip into the galaxies. The larger alien then approaches Lacombe who offers the hand signals to the five musical notes that started the communication and then smiles. The alien offers back the hand signals, and smiles back, its wise eyes betraying the massive intellect they must have. He re-enters his ship with Roy, with the astronauts selected for the journey and the bottom of the ship closes as it begins to rise back into the heavens.

There was not a dry eye in the theatre when I saw the first film for the first time, nor again when I saw it for the tenth. I loved Close Encounters of the Third Kind, and believe, to this day, it was the finest film of 1977.

Much was made about Roy leaving as he had a family and children, but they thought him insane. Though the military and government would likely tell his family he had died, what would they do when he came back right years later, still looking as he did when he got on the ship? His children would have no choice but to finally believe him, and he would have been part of the greatest event in the most significant event in the history of mankind.

Audiences lined up city blocks to see the film (in December) and critics praised the work, most declaring it a greater film than Star Wars. Nominated for eight Academy Awards there was genuine shock when the film was not a Best Picture nominee, though Spielberg was nominated for Best Director. On Oscar night the film won awards for Best Cinematography and Best Visual Effects, the latter in a tie with Star Wars. The effects were awe inspiring, and rather emotional! Looking into the deep, wise eyes of the lead alien haunts me to this day as to begin to imagine the intellect of these creatures in impossible to comprehend.

Oscar night did see Richard Dreyfuss win Best Actor but for The Goodbye Girl (1977), an average Neil Simon comedy in which the actor had a lot of fun overacting to the hilt. His performance here as Roy was vastly better and much more memorable.

So many previous films of this type had the aliens coming to earth to dominate, to render mankind extinct and here was a film suggesting what would be the greatest event in the history of our planet being a peaceful event between two civilizations. It was and remains simply breathtaking and, along with Contact (1997), reminded mankind aliens might be as close as we get to God.

Spielberg has said this is his only film that dates him, because now as a father he says he would never get on the ship at the end, but while single he would have. Others believe it is his finest directed work, though I believe he had long since surpassed it. That said it remains a soaring magnificent film that celebrates the beauty of the human spirit, of mankind, of life

In comparison to Star Wars? Like the Mothership, Close Encounters of the Third Kind towers over it. 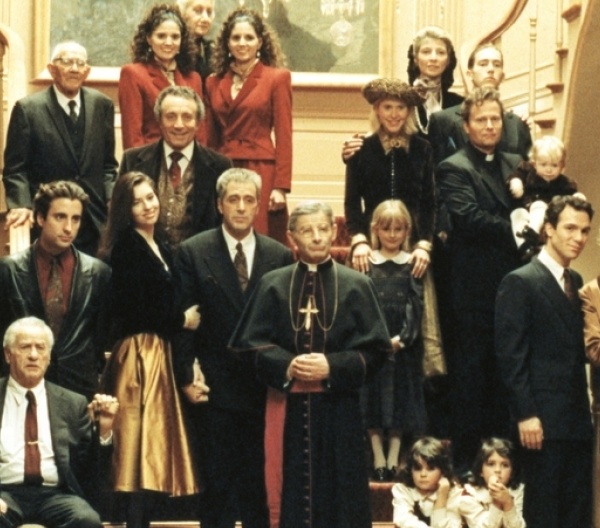