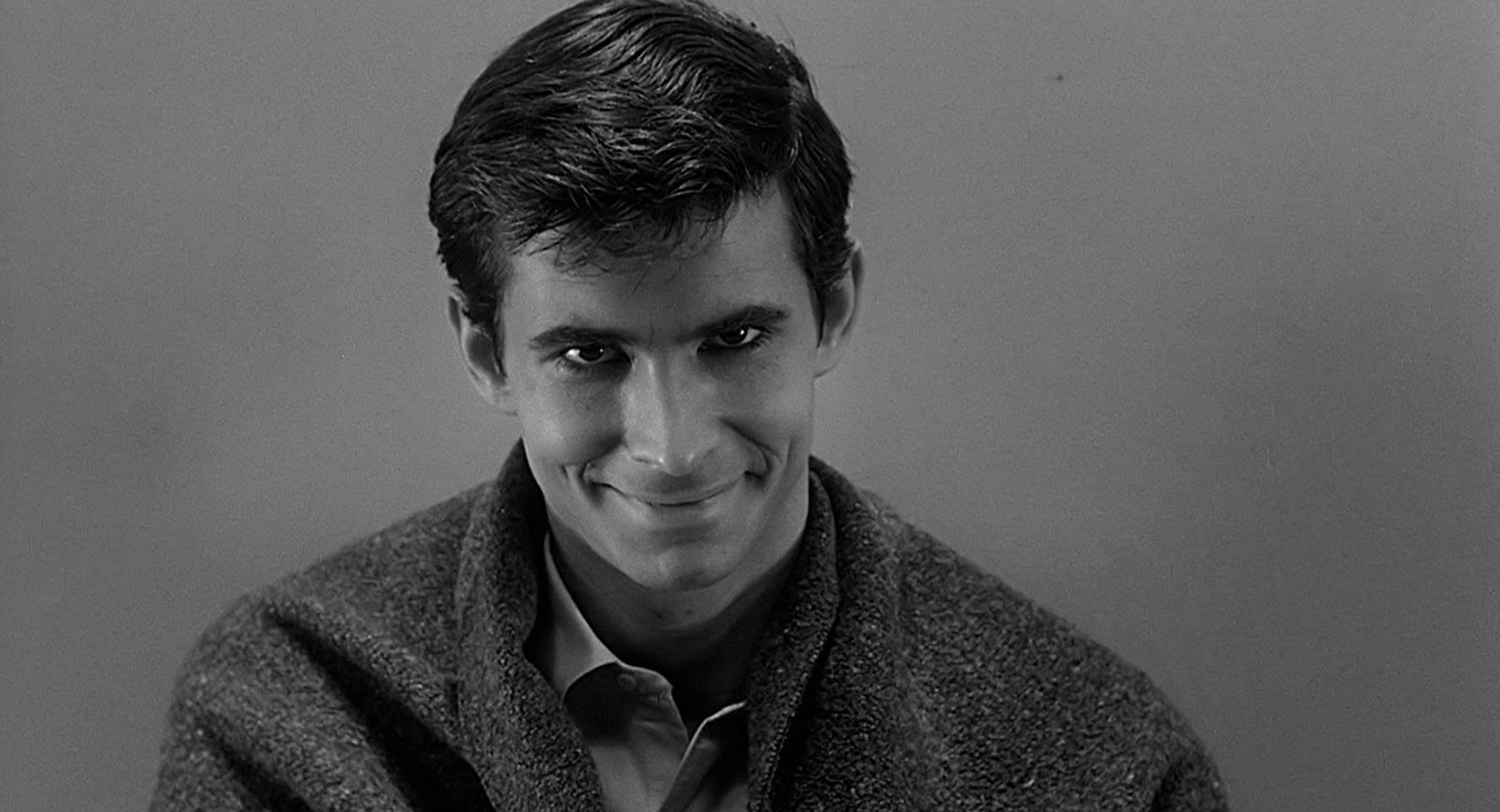 Do film buffs truly understand just what a ground-breaking film Alfred Hitchcock’s terrifying Psycho was? This was a monumental film, breaking fresh ground for a tried and true genre, and influencing dozens of films in the future. To this day I still encounter film students who discuss the massacre in the shower as they do the slaughters of horny teenagers in the Friday the 13th series! The difference being, in Psycho we never see the knife pierce the flesh of Marion Crane, though there is no doubt she is stabbed countless times. Less is more was what Hitchcock believed and his influence has been felt for more than 60 years. That said, he has been surpassed as an artist countless times and continues to be.

To be clear, I do not share the opinion that Hitchcock was a master filmmaker. I find his films chilly, remote, and can never get close to the characters. In my humble opinion he is the most overrated director in movie history. There are some fine films in his filmography: Lifeboat (1944), Strangers on a Train (1951), Rear Window 1954), Vertigo (1958) and the thrilling North by Northwest (1959), excellent pictures all.

However, he seemed to rise to a whole new level with Psycho, as he was firing on all cylinders, and altered the course of the horror genre in one fell swoop. In a genre dominated by vampires, werewolves, mummies, Frankenstein’s monster, zombies, and an array of supernatural creatures from literature of European legends, Hitchcock gave us the most vile monster of all – a human being.

Norman Bates (Anthony Perkins) is a timid young man who operates the Bates Motel, an out of the way little place where he resides with his mother. Into his motel arrives a lady on the run, Marion (Janet Leigh), who has embezzled $40,000 cash from her employer and fled the city, attracting the attentions of both her boss and the police. She checks into the motel to get some much-needed sleep and meets Bates who, unknown to her, spies on her through a hole in the wall. They chat, amiably, but Marion hears a terrible argument between Bates and his controlling mother. Dining with him, she comes to admire Norman and his loyalty to his mother so much she decides to go back and return the cash she has stolen. 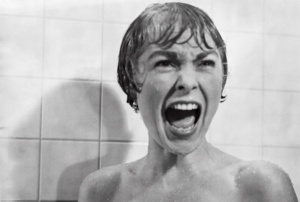 Preparing for a night of sleep, she showers enjoying the hot water when a shadowy figures appears outside the curtain, throws open the curtain and slaughters Marion with a knife. Over and over the knife descends, the blood runs down the drain and finally, pathetically, she falls, her unseeing eyes open, staring.

Realizing what his mother has done, Norman places Marion’s body in her car and sinks it in the swamp behind the hotel. With her goes the cash she had taken, still wrapped in a newspaper. He scrubs the room top to bottom, and seems to wait for what he knows will come.

A detective, Arbogast (Martin Balsam), arrives looking for Marion and he too is killed by the mother, slashed at the top of a huge staircase, falling backward, having seen his killer up close. When Marion’s sister, portrayed by Vera Miles, and Marion’s lover start poking around Norman becomes nervous for the first time, concerned with his mother being found out. Finally in the basement, she comes upon the elderly mother sitting in a corner. When she does not respond to her name, the sister slowly approaches only to find the dried up, decayed corpse of Mrs. Bates, long dead, part of her son’s hobby of taxidermy or the stuffing of animals. Her screams bring Norman, dressed as his mother, wig and all, smiling wildly with a huge knife in his hands, obviously thrilled at the chance to kill again. But before he can, Norman is disarmed and taken down by Marion’s lover, where the depth of his psychosis becomes apparent at the police station, where Mrs. Bates tells the whole story.

As Norman, actor Anthony Perkins was so perfect, so brilliant in the role, he was forever identified with the character the rest of his career. Friendly, a nice guy, a great host, until he dresses as his mother and submits his guests to a horrific slaughter, Norman is utterly insane and terrifying. Remarkably too is that not once does he go over the top in the role, staying on course as to never give away the twist. Sixty years later he is still a chilling character and incredibly was not nominated for Best Actor by the Academy. Digging into Norman’s past we learn that he murdered both his mother and her lover, then kept his mother’s’ body. Is it not a brilliant hint and/or foreshadow that he practices taxidermy? Likely while growing up he killed animals, graduating to humans and full-blown insanity as an adult. Simply superb acting brought to life this unsettling young man.

Nominated for Best Supporting Actress was Janet Leigh as Marion, when you consider the rules in Hollywood at the time, a bold move by the leading lady. To begin, she is a thief, a criminal who flees after stealing cash, and two, she is the film’s leading lady, a true movie star, but butchered 30 minutes or so into the film. Leigh gives a solid performance, but I think the Academy saluted her with the nomination for her courage in taking the part which required her to appear in a bra (never done before) and partially nude in that iconic shower scene.

The studio had no interest in making the film so Hitchcock, obsessed with making the film, agreed to take no fee, and suggested they use his money, his TV crew from his program Alfred Hitchcock Presents, and be left alone to make his film, no interference. Instead of a salary he took 60% of the profits from the film. Further, he sent a letter to the movie theatres asking them not to permit any audience members into the theatre once the lights had gone down, bought up all copies of the novel on which the film was based, and asked film critics not to reveal the twist. 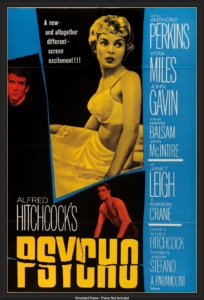 Audiences were stunned by the black and white film which cost less than $820,000 to make, and terrified them in every way. Hitchcock knew exactly what he was doing, using lenses that replicated the human eye, bringing the viewer straight into the film, and of course, the superb film editing, especially, the infamous shower scene. Fifty cuts in just over two minutes, and not once do we see the knife pierce the flesh, not once. Bates swings, the knife descends, we see parts of her body, her reactions, the blood Going down the drain, and that haunting close up of her dead, open eye. Never before had a killing been created with such authentic, chilling realism.

Of course the great twist left movie goers talking for 60 years. To say that Norman as his own mother was terrifying would be a grand understatement, it was perverse, twisted, terrifying and perfect. Insanity had rarely been portrayed with such perfection and truly unsettling authenticity ever before.

One of the greatest horror films ever made and no question for me this is Hitchcock’s true masterpiece. Those years in television taught the veteran director how to shoot fast, economically, and waste no time or shots. The great lesson he learned was “less is more” which allowed the active imaginations of the audience to run wild. Whatever they thought they were seeing during that slaughter in the shower was far worse than what the filmmaker was showing them. Fifteen years after Psycho, Steven Spielberg employed the same technique to even greater acclaim in Jaws (1975) once again allowing the imaginations of those watching to imagine greater horrors than they were seeing. So many other films were influenced by a Psycho, including Frenzy (1972), The Silence of the Lambs (1991), Pulp Fiction (1994), Seven (1995), and so many others.

In 1998, Gus Van Sant remade the Psycho, shot for shot, leaving we critics asking, why?

Why remake that which you stand no chance of improving? You cannot remake perfection and the original Psycho was just that. 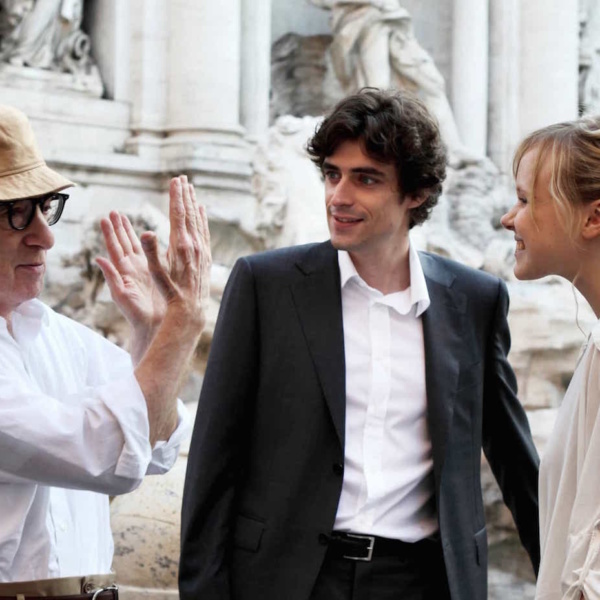 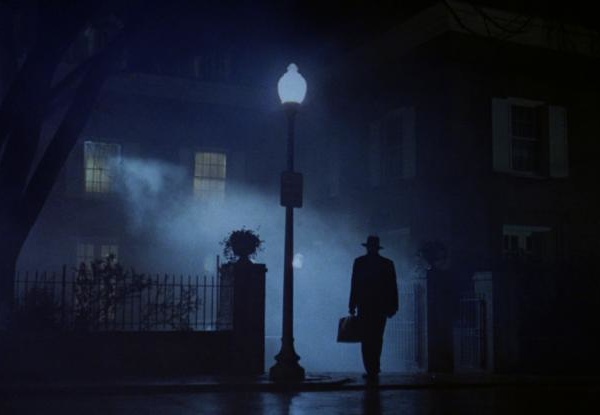