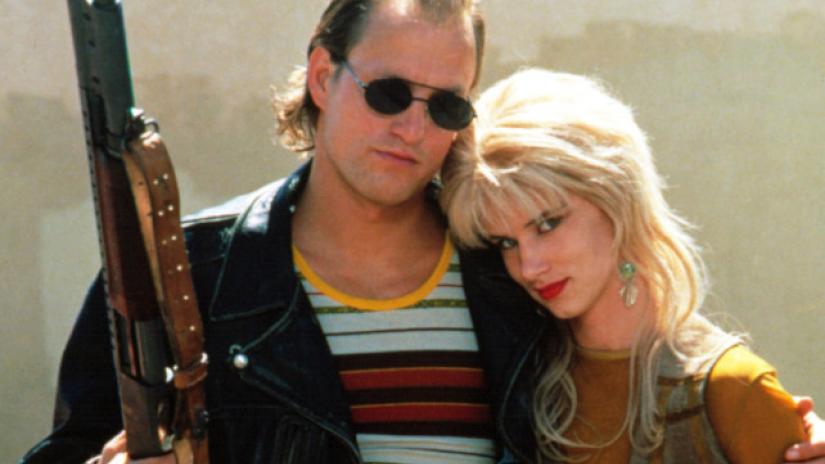 A quarter century – 25 years – have passed since Oliver Stone’s electrifying Natural Born Killers thundered onto movie screens for the first time, alighting a hurricane of controversy. By the nineties, television had become littered with Court TV programs and crime shows. Here was a film, written by Quentin Tarantino initially, then by Stone, that challenges the fact the media elevates killers to near hero status, asking whether or not the crime is the news or the killers?

I saw that happen in Ontario, Canada during the trial of school girl killers Paul Bernardo and his wife Karla Homolka. The two, dubbed the Barbie Doll killers, were an attractive young couple, who would become the most infamous killers in all of Canada. Bernardo had long been raping and terrorizing young women in Scarborough, Ontario, but through the day presented himself as an ambitious, intelligent young accountant on his way up. It was love at first sight for the pair and a few hours after they met, they fell into bed together. Through their relatively short time together, Bernardo introduced her to sadistic sex, which she responded well to, even inviting young women to join them. When she took to drugging them, they crossed lines into madness. They kidnapped, raped and terrorized Leslie Mahaffy for several days before killing her, and did the same with Kristen French. The bodies told the police the killer was in the area where they lived. When Bernardo delivered a savage beating to Homolka, she left him and slowly realized the police were about to move on them both for the killings. Homolka then cut a deal, before letting police know the pair were responsible for the death of her little sister, who died after being drugged and raped by Bernardo. Howls of protest greeted her deal, but it was done, and they needed her to get him.

In the end Bernardo got life and languishes in prison, in his cell 24/7 for his own safety. Homolka did 12 years, divorced him and is now free, married and a mother. Shame on the legal system. There have been books written about them, even a film, which must have delighted Karla.

This is what Natural Born Killers explores, the manner in which murderers become celebrities, elevated by the media to the extent that is all the public hears about. Really it is obscene, but very much part of the society in which we exist.

Tarantino wrote the script, but it was further adapted by Stone, leaving Tarantino to disown the film. 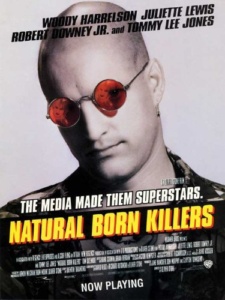 Mickey (Woody Harrelson) and Mallory (Juliette Lewis) murder her abusive parents and launch into a murder spree across the American mid-west, always leaving one person alive to ensure the killings were credited to them. They are merciless, like rabid dogs in a killing frenzy, each having bloodlust.

Stone shot the film on various film stocks and video, editing at a furious pace. Near the beginning of the film we are introduced to Mallory via a sitcom entitled I Love Mallory, complete with laugh track. Her father is portrayed with psychotic fury by comic Rodney Dangerfield, an abusive, sweaty, wife beating, daughter-molesting bully who makes no secret of his actions and intentions. Character actress Edie McClurg is Mallory’s mother, a study in abject terror who knows what her husband does to her daughter but is terrified to say a word. Enter Mickey, the butcher shop delivery boy, who steals Mallory, her father’s car, and the daughter’s heart. After killing the parents, they hit the road to infamy.

Eventually rattlesnake bites bring them down and they have a shootout with the police while trying to get anti-venom in a sickly green lit pharmacy.

Once in jail the film takes a very different turn, as the two of them are going to be interviewed, Mickey by TV crime show host, the self serving, shameless huckster Wayne Gale (Robert Downey Jr.), the worst kind of exploitive journalist, while Mallory will be interrogated by her captor, the murderous cop Scagnetti (Tom Sizemore), a killer cop as dangerous as the two killers. The prison warden, portrayed as a sleazy leach by Tommy Lee Jones, is stunned when Mickey takes control of the TV interview, killing the crew, and everyone in his path to Mallory. She meanwhile, attacks Scagnetti, and beats him senseless until her lover arrives.

Their escape starts a full-scale riot within the prison, covered live on TV by Wayne Gale, who when given a weapon turns murderous, feeling liberated by doing murder alongside his new friends. What he does not realize is that Mickey and Mallory have plans for him too.

Woody Harrelson was still relatively new to the movies but was known to audiences as the dim-witted barkeep on TV’s hit Cheers. Harrelson commands the screen with a towering performance seething of hate and menace for humanity. He enjoys murder, it makes him feel powerful, God-like and though he loves Mallory, there are other women he rapes and murders. It is a remarkably confident performance from an actor not known for such roles.

As Mallory, 19-year old Juliette Lewis was an absolute revelation, like a bolt of lightning on the screen. Sexual, teasing but suddenly flooded with memories of her abusive, name calling father, she is capable of lashing out, for being as dangerous as Mickey. For me, Lewis owns the film, every sequence she is in is electrifying, leaving us wanting more.

Robert Downey Jr. was on the rise here before falling into drug abuse and jail time, but his gifts as an actor were never in doubt. As New Zealander Wayne Gale, he finds himself smack in the middle of a riot, being held by a man he fears, though Wayne feels he has been reborn. Until Mickey shoots him in the hand, blowing a hole through him, Gale thinks he is part of the gang, before realizing he is doomed.

As Ed, Mallory’s father, Rodney Dangerfield is astonishing, playing against type, capturing the frightening essence of a father and husband who is a deeply dangerous and violent sex offender and bully. Sweating profusely, eyes bulging, a sneer across his face seeing the women he terrorizes cower in his presence, it is a profoundly disturbing performance of a monster. I was very surprised the comic was not offered dramatic roles after this, but perhaps it was thought of, however wrong, of being stunt casting.

Stone’s frenetic direction of the film gave the movie a hallucinatory effect, as though a horrific nightmare was unfolding before our eyes and, like Alex in A Clockwork Orange (1971),  we were powerless to look away. Bold, brilliant and made with an alarming intensity, the film was controversial upon release and might have led to Stone’s downfall. Between 1986-1994 he twice won Academy Awards and DGA Awards for Best Director and was nominated for a third in 1991. I believe, and I am not alone, he should have been nominated for Best Director and Best Picture for Natural Born Killers and the following year for his superb Nixon (1995).

The final images of the film strike a frightening chord for Canadians who remember Karla Homolka, now free, married, a mother, In the film Mickey and Mallory tour around America with their children. Free, unbothered by the murder and mayhem they left in their wake and likely still leave. Unsettling and, in the end, terrifying.

This is a dark film, but a masterpiece. 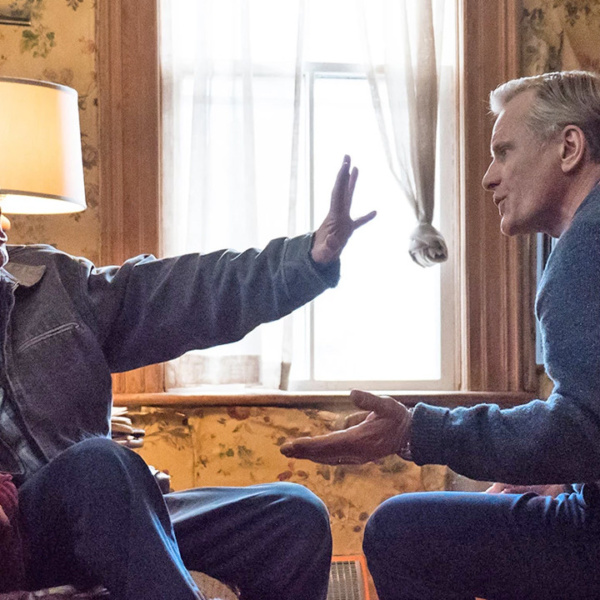 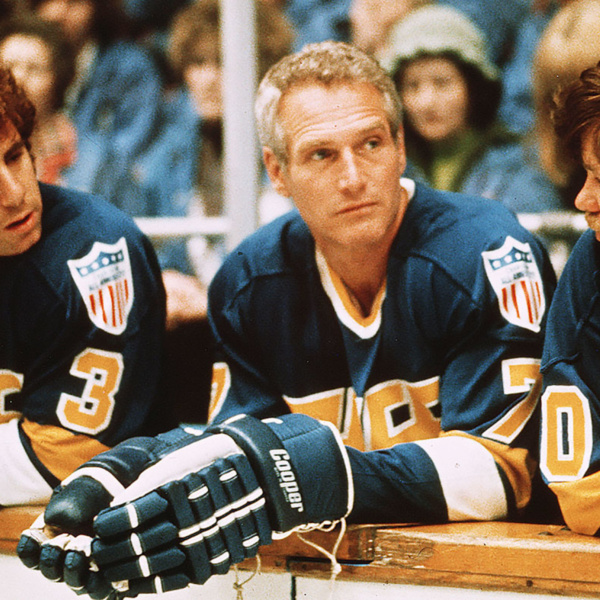