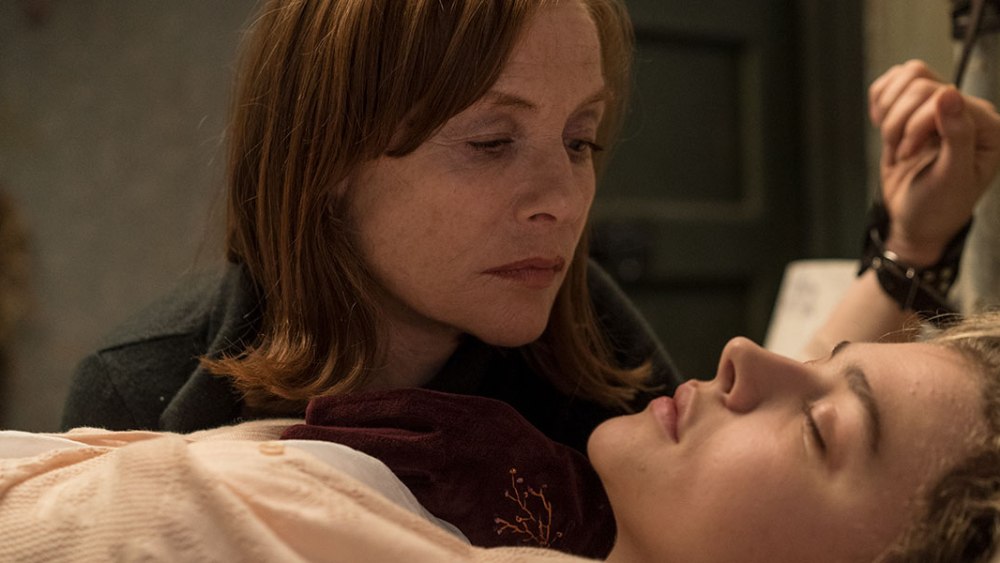 Isabelle Huppert is to French cinema what Meryl Streep is to North American film, a god of acting. Oddly, she might be best known to some of us for her work in Michael Cimino’s Heaven’s Gate (1980), but to others she is known for her array of truly brilliant performances through the last nearly 40 years.

If I had to choose her finest work it would be either The Piano Teacher (2010) or her Oscar nominated performance as a furious rape victim in Elle (2016). We of course do not get to see all of her work, only those released in North American but I must confess I have yet to see a performance from Huppert I have not admired. 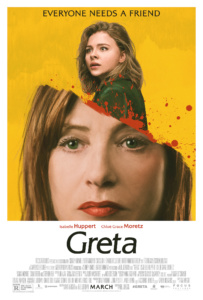 Neil Jordan directs for the first time since his creepy female vampire thriller Byzantium (2012) and, as with all his work, atmosphere is key, and fine performances.

Now before I go further, let me be clear, Greta is chock full of cliches, movie story line and tried and true elements headed towards horror but which never get there. Remember being taught, “beware of strangers”? Well that applies here because what starts with a kindness turns into a nightmare for a young woman, who was truly doing something kind.

When Frances (Chloe Grace Moretz) discovers a purse left behind on a train in New York, she seeks out the owners, which turns out to be an older woman, Greta (Isabelle Huppert) who claims to be a piano teacher, lives for music, and like Frances, is terribly lonely. Frances is mourning her mother who passed recently, while Greta misses her own daughter, in Europe studying she claims. They become friends, though are an odd pair, with virtually nothing in common except their loneliness, which we discover Greta preys upon.

Like the witch in Hansel and Greta, the purse was like candy, left behind to entice, to get interested, to trap. However what Greta does not count on is Frances being such a formidable foe, more than able and willing to fight back. The two women begin a chess-like game that becomes very dangerous and a game that can have but one survivor.

Moretz has become a very popular young actress in Hollywood, beginning with her sensational performance as Hit Girl, the purple costumed super hero in Kick Ass (2010), through to her immortal vampire in the superb remake Let Me In (2012), a remake of Let the Right One In (2008). As Moretz blossomed into a beautiful young woman, the cute factor slipped away, and she has had to work harder in films to be believable. As Frances, she gives the kind of performance we have seen her give previously, many times, though Huppert seems to take her up a notch or two.

Huppert is sort of creepy as Greta, almost from the first moment we see her (which telegraphs much) you just know something is off. The attempts to be earnest are overdone, the smile lingers too long, the attempts at concern feel fake, we know this lady is very bad news. And when, like a spider, she has trapped her prey, she takes her time, toying with it, before making her move. Her rampage in the restaurant feels forced, just as her moments in the psych ward feel “actorly”. It might be the first time in her career Huppert has appeared false, not to mention disappointing.

Jordan directs with the usual confidence, and the atmosphere in Greta’s apartment is what we expect given his past films. The script however fails him with its rampant cliches and familiarities.

In its own unique way Greta is a monster movie, the creature being in the least expected form. Too bad this type of film has been done to death. An OK time waster without an original thought throughout.

MOVIE RELEASE ALL BUT SHUT DOWN