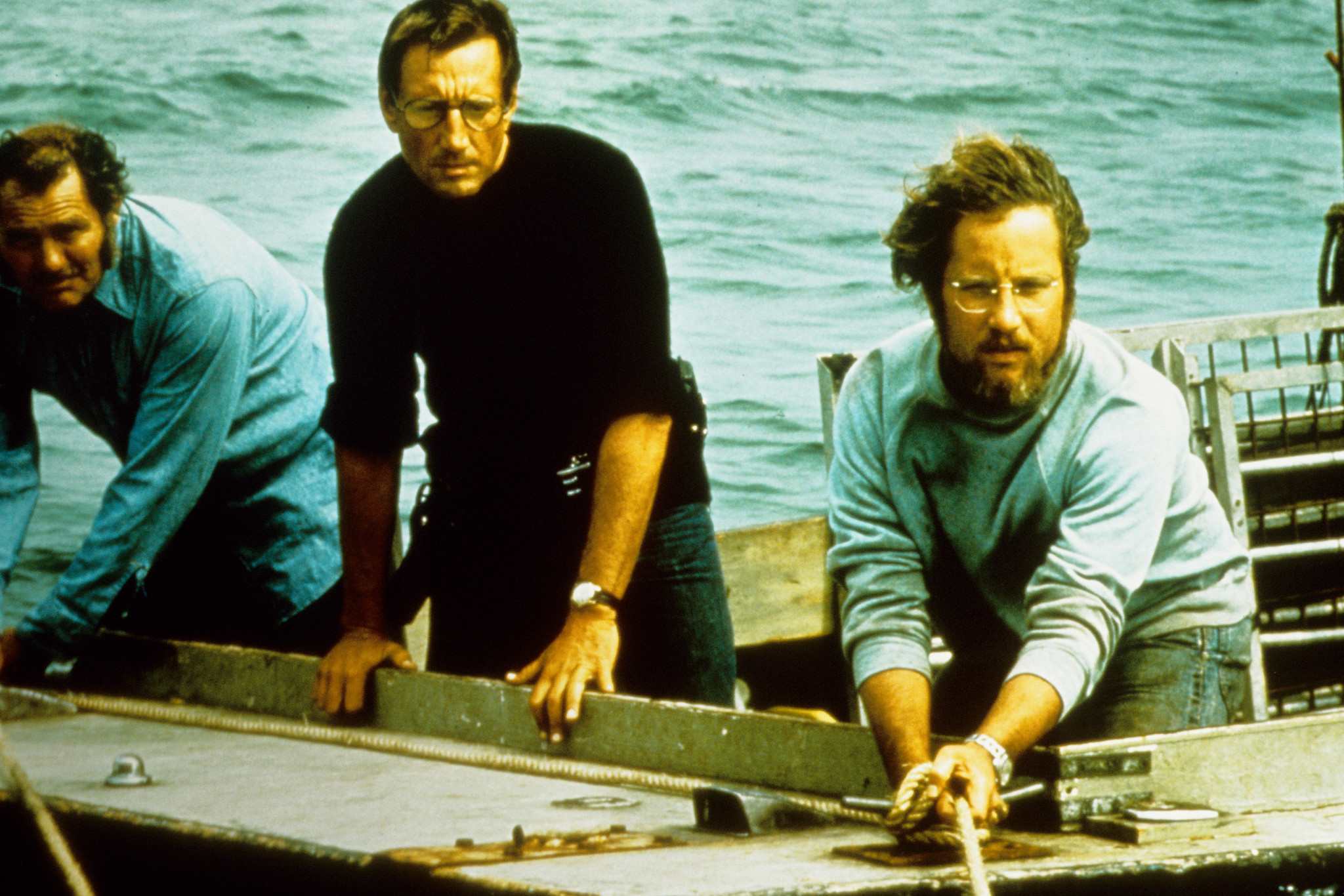 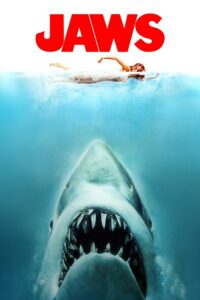 The ocean is like glass, smooth, near unmoving. The only light is provided by the bright moon, lighting up the sea like a giant orb in the sky. The girl swims out into the warm water, ever deeper, watching the guy she is with now passed out on the beach. He had watched her strip down to nothing, hoping to get lucky, but was too drunk to go in on his own, falling onto the sand, eventually passing out. She moves around the water, finally coming to a stop treading water when she is pulled under, violently, and comes up not knowing what has happened. Another pull, just as violent and she comes up this time realizing she is being attacked by a shark, and it is eating her alive. She screams, thrashes, does everything to stay alive, but loses the battle, eventually pulled under into the sea, gone forever. The sea remains as pristine and still as it had been, it is as if she had never existed. It is among the most primal and terrifying deaths ever seen on film.

Thus began Jaws, one of the most terrifying movies ever made, the first major summer blockbuster and the launch of the career of one Steven Spielberg, who very quickly would establish himself as one of the greatest directors in film history. Jaws was the first of its kind, a massive summer blockbuster that was entertaining yet had heart and was an artistic masterpiece. Summer releasing would change the very next year, in fact the entire calendar year would be altered after Jaws, only one of the many happenings that surrounded this extraordinary film.

Among the most vital jobs Spielberg had to solve was the casting which began before he was attached to the film. Charlton Heston was to be Body, while Charles Bronson or Robert Duvall had been in discussions to play Quint. Jeff Bridges seem the logical choice to play Hooper, but Spielberg had other ideas. Fresh from his Oscar nominated performance as a cop in The French Connection (1971), Roy Scheider was given the plum role of Brody, a transplanted New Yorker terrified of the water, living on an island. Oscar nominated actor Robert Shaw was cast as Quint, while Richard Dreyfuss was in as Hooper, the wise crackling comic relief of the film. Little did the young director know he had cast the three in the most iconic roles of their careers and created a superb ensemble of actors who bounced off one another beautifully.

Despite the protests from Universal, Spielberg wanted to shoot the film on location in Martha’s Vineyard in Massachusetts and, as explained to the young director, the location shoot was plagued with troubles. The budget soared to twice the amount, the shoot doubled in length, but the cast and crew, and Universal head honcho Sid Sheinberg believed and stood by their director. They might not have understood what he was attempting all the time, but his nervous energy was infectious and when two of the three mechanical sharks built especially for the shoot failed, (one sinking to the bottom of the sea) he improvised, finding other ways to show or suggest the approach and presence of the shark. Rather brilliantly the young director improvised during the shoot, deciding to show the point of view of the shark as it glided towards its prey, or the fin slashing through the water as it gained speed, or the buoys meant to bring the shark to the surface, held in place by harpoons. The only times we see the shark, and those jaws up close, is towards the end when Brody is tossing chum (blood and fish guts) over the end of the boat and the shark surfaces; when Hooper lowers himself into the sea in an anti-shark cage which goes poorly; and when their boat is sinking and the shark leaps onto it, weighing the end down, tilting the boat up and causing Quint to slide helplessly into those dreaded jaws. Accompanied by the excellent John Williams score, the director created some of the most terrifying moments ever put on film.

In many ways resembling Moby Dick (1956) in its approach, the film was bolstered by superb performances from the cast. Scheider was terrific as a tough New York cop who cringed at the thought of going out on a boat to hunt a Great White, while Dreyfuss was quick with a quip and smart aleck answer, his education and wealth a sore spot with Quint who thought him rich and babied. Robert Shaw as Quint was astonishing, giving the film its own Captain Ahab, obsessed with killing the shark, frankly with killing any shark. In the best scene in the film, we learn why. Quint was aboard the S.S. Indianapolis when German torpedoes took the great ship down, leaving its crew to be attacked and devoured in shark infested waters. All around Quint was death, including his dear friend, bitten in half below the waist. He tells this story breaking up the comedy of a sequence in which the men compare scars, and Hooper asks about a tattoo Quint had removed. The moment he mentions Indianapolis, Hooper goes silent and Quint tells his story, and after Brody and Hooper have a greater understanding, possibly respect for the man than they had previously had. Ironically, Quint will die a terrible death, sliding directly into the jaws of the shark and bitten in half before the sharks goes into the sea.

In the end it is Brody who kills the shark, hanging onto the mast as the shark races towards him, an oxygen tank in its jaws. Firing with a rifle, Brody eventually hits the tank blowing the shark to pieces which rain down on him, a carnage of blood and gore. Reunited with Hooper, they begin the long paddle to the shore, Brody having gotten used to the sea.

At its simplest Jaws was a big monster movie, but the terror it created came from the fact sharks do attack human beings. Great White sharks are the most feared predator in the ocean, known to devour humans whole, though it is doubtful they actually hunt people. However if a buffet of swimmers is served up on a crowded beach, of course it is going to feed.

Jaws became an absolute phenomenon days within its release. Theatres were filled, the audiences screamed at all the right moments, there was not a sound to be heard during Quint’s monologue, and cheers erupted when the shark was blown up. It all worked. Beautifully edited by Verna Fields, the film was an absolute masterpiece of modern terror. By summer’s end it was the highest money maker of all time, but more it was hailed by the critics for the artistry within. Pauline Kael hailed Spielberg as the savior to a new generation of filmmakers, and it seemed overnight he was a household name.

Yet the film’s release also displayed the immaturity of the young director. Whispers that the film was created in the editing room by Verna Fields angered Spielberg and he never worked with her again. On the day of the Academy Award nominations cameras followed Spielberg live, waiting to catch his reactions. He boldly announced Jaws would be nominated for 12 Academy Awards, but in the end, just four, and Best Director was not among them. “What? Oh no! They went for Fellini instead of me!” he wailed with live cameras present. Jaws was nominated for four Academy Awards which admittedly was a puny number considering the craft within the film. Yes, Best Picture was among the four, along with Best Film Editing, Best Sound and Best Musical Score, the latter three which the film won. Nominations should have come for Best Director, Best Supporting Actor (Shaw), Best Cinematography, and Best Visual Effects which would have been eight, much more reasonable a number. The Academy chose Milos Forman’s stunning One Flew Over the Cuckoo’s Nest (1975) as the year’s best film, one that is tough to argue. Spielberg was nominated as Best Director by the Directors Guild of American Awards, and for a Golden Globe, but he saw and has always seen the Oscar as acceptance into Hollywood as a filmmaker.

There were sequels made Jaws, each progressively more foolish, Spielberg having no involvement. The fact they were dreadful only magnifies the brilliance of the first and his sublime accomplishment. Had the director not humanized the cast, given us flesh and blood people we could understand, the film would have been just another monster movie. Spielberg had something else in mind. Wildly entertaining, but grimly realistic, visceral and primal in the terror it provoked. Still that shark glides, still the terror exists.

Jaws is, was a work of art and remains so. 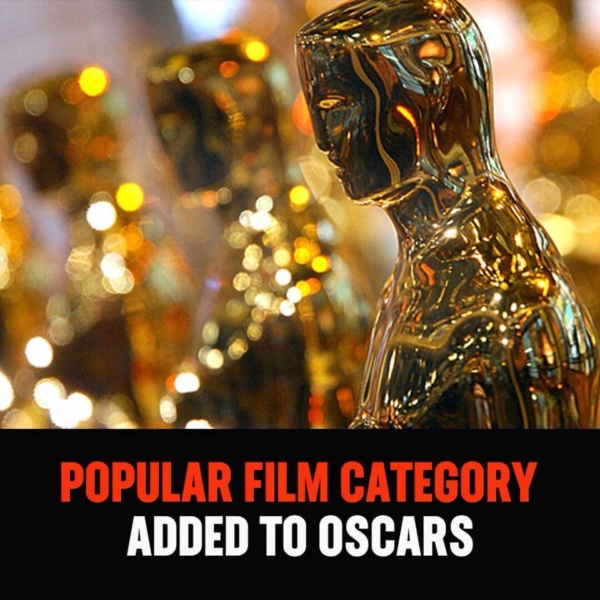 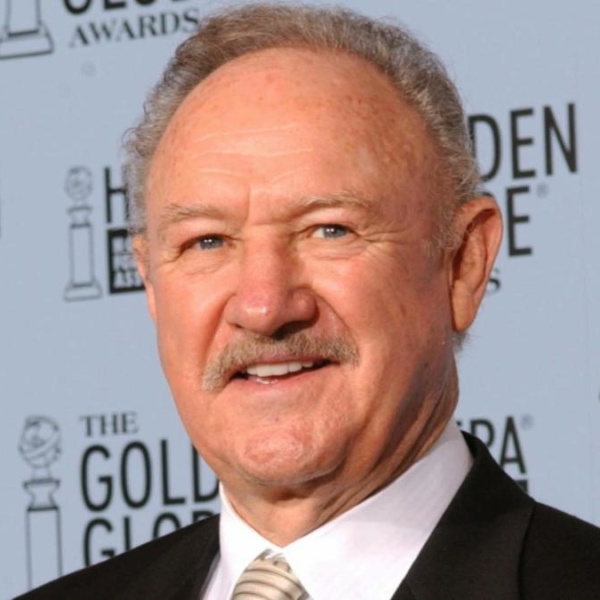