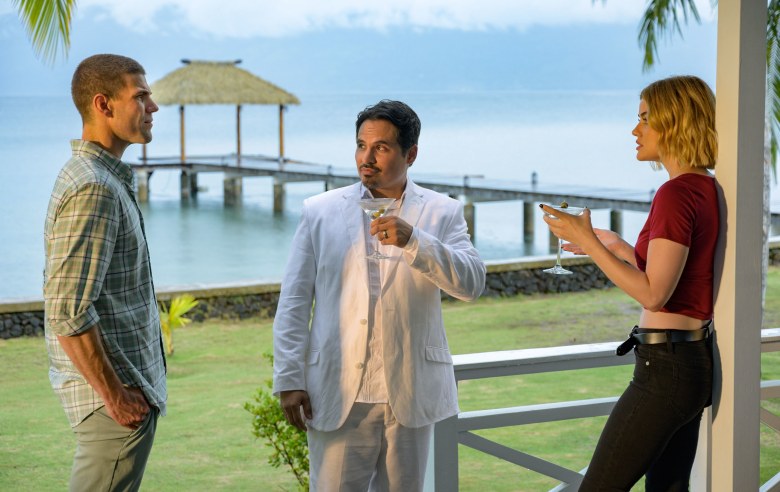 If I see a worse film this year than Fantasy Island, which is even worse than Dolittle somehow, I will be amazed. Beyond stupid, it is insipid, empty of imagination of any kind and vile, a complete about face from the silly TV series from which it has been adapted. And what is a fine actor like Michael Pena doing in this? Rather than giving the big, warm, expansive performance that Ricardo Montalban gave week to week as the white suited Mr. Roarke, there is something sinister about this guy from the beginning, something not to be trusted, but that is the entire extent of Pena’s performance. Look mysterious, look creepy, and go! I suspect those were his directions.

My greatest fear when I heard that the film was being made, beyond having to see it, was that the great Peter Dinklage would be talked into or paid to portray Tattoo, the diminutive assistant to Mr. Roarke who famously told Roarke, “da plane, da plane” was arriving delivering guests. Mercifully, Dinklage is not in the film, hopefully he was not insulted by being offered the role, as he is far too fine an actor and person to be involved in dreck like this. Again, Michael Pena, what were you thinking? Seriously dude, you are a great actor, the best thing in Crash (2005), deserving of an Oscar nomination for supporting actor, but this? Why?

Like the silly though popular TV series, ordinary men and women fly to Fantasy Island to have their secret fantasies brought to life by the seemingly magical Mr. Roarke. The twist here is that the fantasies become horrific, revenge fantasies that bring out the worst in the guests and the film.

As the former Director of the Toronto Film School, a position I held for 10 years as we built the college around the filmmaking program, I screened stronger films made by second term students than this nightmare. I read stronger scripts by first term students and that does not even begin to describe the horrors of Fantasy Island. Supposedly this film was created by professionals in the business, but after watching the film, I question that.

A group of contestants have won their fantasies and arrive anxious for the island to deliver. A couple of college grads want the big drunken orgy they missed out on, a girl wants revenge for being bullied in her youth, while a woman wants to have another chance with the man she turned down. And finally, another guy wants to be the war hero he always imagined he might be. Needless to say, given the horror film this is, not to be confused with the horrific film it is, their fantasies become their nightmares. I will not mention the actors by name portraying the guests, their punishment is being in the film, and they need no further bad press, trust me they are getting a ton of it, no need for me to add to the cruelty.

Why was this film made? Did the makers believe for one second it would be anything of note? That it might strike a chord of nostalgia and cause baby boomers to run to the cinemas to relive their past? I love movies, I believe every film might be the greatest ever made when I sit down in my seat or place the Blu Ray in the player, but just 20 minutes in this one had me wanting to gauge my eyes out.

The first words we hear are “the plane, the plane” but translated to the truth they might as well be warning us saying “the pain, the pain” because that is what you are going to endure watching this truly horrible film. Relentlessly awful. I watch movies for a living, but ones like this sometimes make me regret my work. That is how awful Fantasy Island is.

“Smiles, everyone, smiles” … never mind, I could not muster one either.

Shame, eternal shame on the makers of this garbage.

PODCAST #024 – THE WORST MOVIES EVER MADE