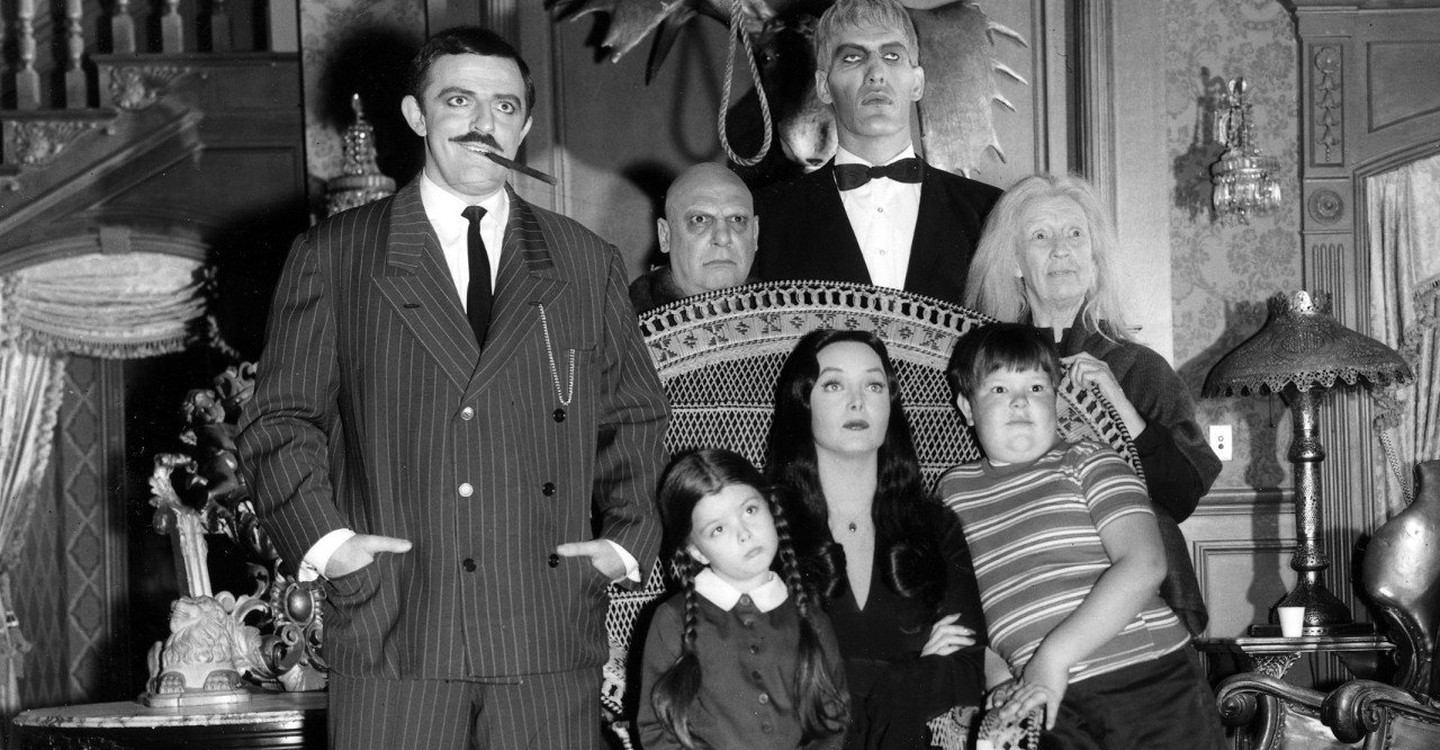 It all started with a simple one panel comic in 1938 where Charles Addams introduced a wealthy, but ghoulish, extended family who delight in the macabre. This was the first of some 150 single panel cartoons originally published in The New Yorker magazine continuing to 1988 when Charles Addams passed away.  Interestingly, the initial comic did not name any of the characters.  This did not happen until The Addams Family TV series was created with parents, Gomez and Morticia Addams, daughter Wednesday, son Pugsley, Uncle Fester, and Grandmama, among other dark relations who appeared now and again.  Supporting the wealthy family are butler Lurch, a hand by the name of Thing, and a short hairy and odd creature, Cousin Itt. 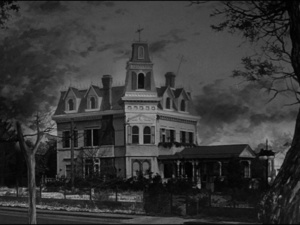 In 1964 the ABC TV network created the weekly television series based on Charles Addams work, developing 64, black and white half-hour episodes of The Addams Family that ran from September 18, 1964 to September 2, 1966.  During this period, The New Yorker magazine’s editor William Shan refused to publish any further Addams Family panels as he felt the association with a television program was beneath the values of his refined readership.  This ban continued until Shawn’s retirement in 1987 when the panel was again permitted onto the pages of the New Yorker. The series is often compared to The Munsters which used a similar scenario about an oddball and macabre suburban family. It debuted the same week and ran for the same two seasons, but did a little better in the Nielsen ratings. Both programs were not overly successful in their initial two-year runs, but became cult favorites in syndication. Both programs inspired spin-offs and feature length movies.

It should be no surprise that the exterior of the Addams’s family home on screen was actually a matt painting. It appears as a Second Empire-style mansion which comes across as having all of the characteristics of a typical “haunted house” including the iconic Romanesque tower. It was initially based on an actual 19th Century Victorian-style home located at 21 Chester Place in Los Angeles, which was to be utilized when exterior shots were required.  To accomplish this the frame would be cropped in order to hide the fact that the iconic tower which in reality didn’t exist.

It’s exterior was filmed for the series pilot, but the producers decided it was too costly and not “spooky” enough to maintain as a location and turned to their art department for a cheaper solution. The Chester Place house was demolished in 1967 and the matte painting has since been lost, having allegedly deteriorated through overuse.

The interior set consists of an open floor plan which presents a museum of strange and bizarre oddities used to create and support the eccentricities of the family. Due to tight budget restrictions, the set was constructed utilizing components from the The Unsinkable Molly Brown (1964), which had just completed production. Furnishing the set, designers took their cue from Charles Addams actual Manhattan apartment, in which he displayed his odd collections – suits of armor and antique weapons.

The eventual success of the 1964 series, staring John Astin (Gomez) and Carolyn Jones (Morticia) led to numerous spin offs and projects: an animated sitcom, also called The Addams Family, in which the family hit the road in a Victorian-styled motor home, complete with a Gothic tower, circling bats and a storm cloud which followed them as they traveled.  The series ran on NBC from 1973 – 1975. Halloween With The Addams Family (1977) was a made for television movie with a rather lame plot involving duplicates and crooks who want to steal the family fortune, a story which reunited Astin and Jones in their roles as matriarchs of the morbid family.

Nearly two decades later the first of two feature films were developed on the family: The Addams Family (1991) and Addams Family Values (1993). In both films Morticia was played by Anjelica Huston (nominated for the Golden Globe Award for Best Actress), and Gomez was played by Raul Julia.  The films also stared Christina Ricci as Wednesday and Christopher Lloyd as Fester. The success of the first film inspired a second animated series (1992–1993). In this version, also entitled The Addams Family, the group lived in a town called Happydale Heights. Each episode had the household being challenged by a series of recurring villains who are interested in taking their home away from them or kidnapping one of the family (usually Uncle Fester) for one reprehensible reason or another.

In 1998 a direct to video film entitled Addams Family Reunion, starring Tim Curry and Daryl Hannah, was developed to act as a vehicle to reboot the franchise, and a potential pilot for a new television series entitled The New Addams Family, which aired from October 1998 to August 1999 on YTV in Canada and Fox Family in the United States. And in April 2010, the Broadway musical The Addams Family opened featuring Nathan Lane (Gomez) and Bebe Neuwirth (Morticia). The production ran until December 31, 2011 and was nominated for two Tony Awards and eight Drama Desk Awards.  Having seen the production which was beautifully staged and acted by Lane and Neuwirth, I still have issues with some of the components that made it through the years of writing, planning and out of town tryouts before opening on Broadway. The story is based upon daughter Wednesday falling in love with a normal boy, with the two families meeting, each finding the other peculiar and both trying to break up the relationship.  In the production, the Addam’s mansion was located in Central Park, in the heart of Manhattan, with no one realizing it was there.  This is odd as NYC had nothing to do with the storyline.  The songs were quite well done, all based upon the Addams Family theme song – but – Uncle Fester has one uncomfortable song where he professes his love for the moon – that one seemed bizarre and unnecessary. 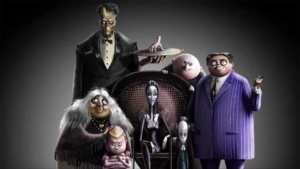 In all versions and sequels, the original characters as portrayed in the 1964 series were emulated with little change attesting to the iconic portrayal by the original cast.   In 2010, Illumination Entertainment, in partnership with Universal Pictures, acquired the rights to the Addams Family drawings with the plan of creating a stop-motion feature length animated film, based on Charles Addams’s New Yorker drawings. Tim Burton was retained to write and co-produce the film. The project was cancelled in July 2013, with no explanation provided by the studios.

Now, there is a new version of the macabre family in post-production and slated for release on October 11, 2019. This version will also be an animated feature length film and is being directed by Conrad Vernon, who is best known for his work with Dreamworks on Shrek (2001), Monsters vs. Aliens (2009), and Madagascar 3: Europe’s Most Wanted (2012). The producers have retained top notch talent including Bette Midler, Charlize Theron, Allison Janney and Oscar Isaac to voice the characters.

To see the trailer for the new feature, click here: 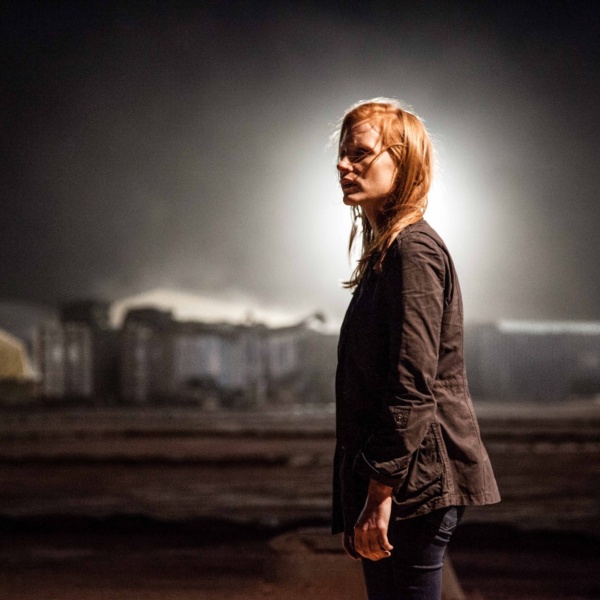 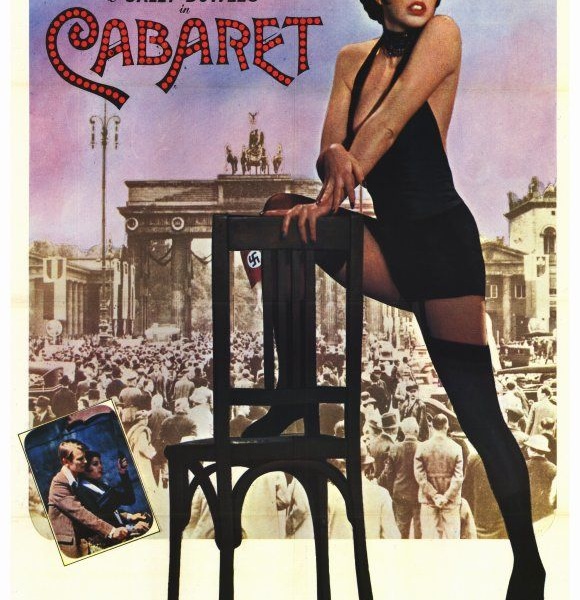