There are many examples of comedic actors giving great dramatic performances. People like Steve Carrell, Bill Murray, Jonah Hill and even Jim Carrey have successfully taken their fame as comedic stars and turned only to give strong performances in dramatic fare. Here, I am focusing on the opposite; actors primarily known for their dramatic chops who have given hilarious performances in comedic films (or even funny roles in films that are not straight-forward comedies). Making this list was tricky as it is hard to find actors who usually ONLY give dramatic roles and I’m sure not every entry here adheres to a strict set of rules. Nevertheless, here are ten great comedic performances by actors predominantly known for drama.

Quick question: What do The Lord of the Rings/The Hobbit, King Kong, Star Wars, Planet of the Apes and the Marvel Cinematic Universe all have in common? (Hint: They aren’t ALL owned by The Walt Disney Company……yet!)

The answer is Andy Serkis; a man who in my estimation is the greatest working actor alive. Serkis is (as Steven Spielberg aptly said), “The man of a thousand digital faces.” He’s also been called the King of Mo-Cap due to his integral part in bringing Performance-Capture acting to the mainstream. He was given the role of Gollum in Peter Jacksons’s The Lord of the Rings, something he expected to be a 2-week voice-over job. Nearly two decades later, Andy Serkis has championed the technology that helped him create some of the greatest characters in modern folklore. Caesar, Serkis’ Chimpanzee protagonist from the rebooted Planet of the Apes Franchise is the only cinematic character that I could comfortably call me “Messiah.” I would follow that chimp to the gates of hell. Serkis should have won one (if not three separate) Oscars for Best Actor for portraying Caeser. Alas, he’s never been nominated once.

The intense drama he brings to his roles is beyond palpable; and while Kong, Gollum/Smeagol and other parts he’s played contained moments of humour, they are almost always entirely tragic characters. Serkis was brought on as a consultant for Mark Ruffalo’s Hulk performance in Avengers: Age of Ultron (2015) and ended up getting cast in a bit part as South-African arms dealer (and Black Panther nemesis) Ulysses Klaue. Reprising the role as the secondary villain of Black Panther (2018) Serkis really gets to shine without all of the digital makeup in a big film for the first time. While Ryan Coogler’s Erik Kilmonger was a brilliant and stoic villain (steeped in earnest brooding and anger), Klaue served as a campier, more comedic antagonist, chewing the scenery in a style reminiscent of Jack Nicholson’s Joker or Jim Carrey’s Riddler. Serkis finally gets to use his own face for a huge movie and he’s getting crazy laughs the whole time even though he’s playing a rudderless scumbag. South African accents are tricky even for parrots like me, so it’s no surprise that the English actor adopts the difficult dialect like a boss. He’s so fun to watch. I still want to here Klaue’s mixtape. Tom Cruise has been buddies with Ben Stiller for quite some time was announced that Cruise would make a cameo in Stiller’s Tropic Thunder (2008), everyone got excited. I take issue with the fact that this role is considered a cameo because it’s not. This is a fully-fledged character who appears throughout the entire film unrecognizable due to a bald cap in a fat suit and Lino left the theatre not realizing it was him.
Crass, abusive and all-around hilarious, Les Grossman is an amazingly funny character in a movie jam-packed with lots of them. Hearing Tom Cruise swear makes me smile. Here is a priceless rant that shows how Cruise never does anything half-assed.

With roles in The Grand Budapest Hotel (2014) and The Lego Batman Movie (2017), Fiennes is slowly stepping into more comedic roles. He will appear as Sherlock Holmes’ nemesis Moriarty in the upcoming comedy Holmes and Watson (2018) starring Will Ferrell and John C. Reilly as the famed duo.

No doubt someone with significant comedic chops, Ralph Fiennes first made me laugh in a gut-busting fashion ten years ago with his role as the cockney mob boss Harry Waters in Martin McDonagh’s In Bruges (2008). Aside from cursing a blue-streak and getting hilariously annoyed at seemingly everyone and everything, Harry Waters has some insightful commentary on life, depression and ethics, as can be seen here in the following clip. Billed as playing Iron Man’s arch-nemesis, the “Mandarin”, this bait-and-switch roles followed the formula used in Batman Begins (2005) where Ken Watanabe “played” Ra’s Al Ghul before being revealed as a decoy for the true Ra’s Al Guhl (Liam Neeson). Although using a similar formula, Kingsley’s character isn’t a loyal follower of Aldrich Killian (Guy Pearce), the “true” Mandarin; he’s just some drunk, drug-addicted actor who was hired as a patsy/decoy for the masses to see. When his identity is revealed, it’s beyond hilarious to see that the terrorist mastermind is just a cockney slob in way over his head. Kingsley is brilliant.

While many may have chosen American Hustle (2013) here to highlight Bale’s comedic chops, I must point out this satirical gem from nearly two decades ago. Starring as a yuppie Wall Street snob who doubles as a serial killer, Bale is funny in a disturbing way that should not be missed. Delving into the importance of his possessions and the artistic integrity of famed 1980s pop musicians, Patrick Batement is the best kind of crazy; endlessly fascinating and completely out of touch with reality. Here, he gleefully takes an axe to co-worker Paul Allen’s (Jared Leto) face. How often do you get to see Batman kill the Joker with a smile on his face? Enjoy.

5. Julianne Moore as Maude Lebowski in THE BIG LEBOWSKI (1998) One of the most talented dramatic actresses working today, Oscar-winner Julianne Moore never fails to deliver. While she has delved into comedy a few times over her career, the crown jewel in her comedic tiara is no doubt her role as Maude in the Coen Brother’s The Big Lebowski (1998). Affecting an accent somewhere between British and vintage, stage American, Maude Lebowski steals every scene in which she appears in the Coen’s cult-classic.

Chris Hemsworth was perfectly cast for the God of Thunder in the Marvel Cinematic Universe but after two solo films being stoic and (let’s face it) kind of boring, Hemsworth was given the opportunity to show off the great comedy chops he’d put on display in Ghostbusters (2016) when Taika Waititi took over directing duties for the third solo Thor film. Turning the Norse deity on his head, Thor finds himself without his hammer as a fish out of water in Thor: Ragnarok (2017), a great comedy that was filled with improvisation. He also gets to play buddy to Mark Ruffalo’s Hulk (who was allowed to talk this time). The movie is fun and just plain hilarious, showing us a side of Thor that we loved and were more than happy to see continue into Avengers: Infinity War (2018). We can only hope that Taika Waititi will take over directing duties on Guardians of the Galaxy Vol. 3 now that James Gunn has been fired from Disney. It seems to only make sense that Thor become a member of the Guardians now that he’s out of solo films. His interactions with Rocket and Groot were some of the best moments in Avengers: Infinity War. While De Niro’s recent career is not shy of catastrophes, his attempts at comedy haven’t always been misses. In the Harold Ramis-directed Analyze This (1999), De Niro’s brilliant chemistry with Billy Crystal carries the movie as he plays Paul Vitti, a gangster with emotional issues to consults a psychiatrist (Crystal). Paying homage to the many mafioso roles that made him famous, De Niro clearly has a blast lampooning the stereotypes that such characters have embedded in the popular consciousness. Here, the film breaks the “fifth” wall by alluding to De Niro’s character from The Godfather Part II (1974), Vito Corleone (albeit referencing Marlon Brando’s portrayal of the same character in The Godfather).

2. Leonardo DiCaprio as Jordan Belfort in THE WOLF OF WALL STREET (2013) Leonardo DiCaprio, it’s about as a list as you can get.  His intensity and thoughtful performances highlighted some of the greatest dramas of the last 20 years including several by acclaimed filmmaker Martin Scorsese.   In The Wolf of Wall Street (2013), DiCaprio plays Jordan Belfort.  It’s the funniest thing he’s ever done and he should have won the Academy Award for best actor. The scene of Jordan trying to get into his Lamborghini while suffering the effects of a very potent Quaalude. DiCaprio took inspiration for the scene by watching a YouTube video of a convenience store surveillance camera that showed an incredibly drunk man trying to buy more beer.  The infamous clip shows the case of beer the man is trying to purchase as if it is Thor’s hammer.  Only the worthy parentheses or sober are able to wield it.

Here is Leo’s homage to the above clip in Scorsese’s film. Along Came Polly (2004) is one of those forgotten gems. I’m no huge fan of romantic comedies but this one is pretty awesome. In a role that was written with Jack Black in mind, Philip Seymour Hoffman plays Sandy Lyle, the best friend of Ben Stiller’s character. Sandy Lyle is a boorish, obnoxious and altogether repulsive individual who has been riding the coattails of a small film appearance he made as a child in a movie called Crocodile Tears.  Considering himself to be a serious thespian, Sandy Lyle worst of tremendous humour.  There is also something inherently satisfying and awesome about having someone like Philip Seymour Hoffman play this role. Sandy Lyle is the worst kind of actor you could possibly imagine. Not only is he not very good; he’s pretentious, full of himself and always injecting himself in places he doesn’t belong. Philip Seymour Hoffman is one of the greatest actors of the modern era. In this film, we get to see one of the greatest actors in the world play one of the worst actors one could have the misfortune of working with.  That’s just straight-up funny.  Please enjoy Sandy Lyle’s greatest hits. 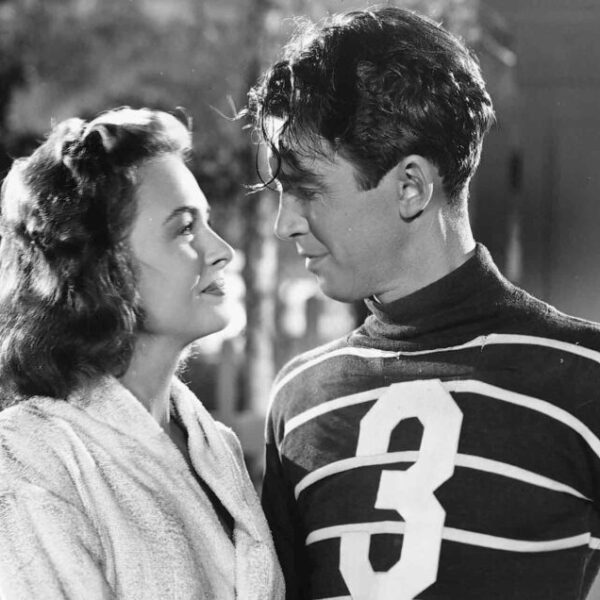 GREAT PERFORMANCES OF THE FORTIES

NICK’S 10 GREATEST FILMS OF ALL TIME (sort of)