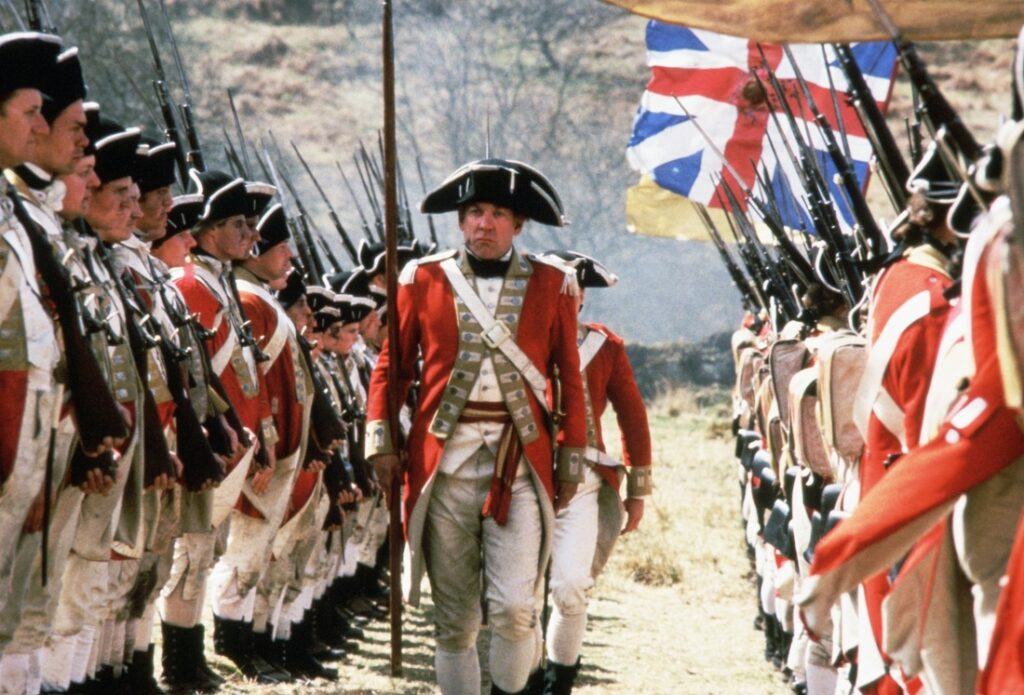 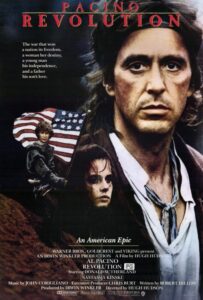 The producers touted this drama with Al Pacino and Donald Sutherland as an important historical film. Directed by the talented Hugh Hudson, who also directed Chariots of Fire (1981) and the magnificent Greystoke: The Legend of Tarzan, Lord of the Apes (1984), Revolution still tanked in spite of the talent behind it. It was a dreadful mess of a film with downright awful performances from two great actors.

After his hapless son enlists in the army, Tom Dobbs (Pacino) does the same, hoping to keep him safe. Little does he know what they are in for.

And yes, that is Annie Lennox of the Eurythmics screaming bloody murder at the film’s opening. Why? I do not remember seeing or hearing from her again. And no, she does not sing.

Dobbs meets a lovely young Daisy McConnahay, portrayed by Nastassja Kinski, a true-blue American daughter of a family of snobs. She has a thing for Dobbs, and they manage to light a fire for each other during this war, despite only seeing each other a few brief times.

One of the first major films made about the Revolutionary War, its main theme is the absolute cruel manner the Brits treated the Americans. They are a nasty bunch, whether tying their prisoners to the firing end of a cannon or allowing them to die in torment on the battlefield. Donald Sutherland as Major Peasy is an outlandish cartoon character who enjoys sodomizing young boys captured fighting. His permanent scowl and sadistic actions prove him to be pure evil. Sutherland, a brilliant actor, has dazzled with performances in Ordinary People (1980) and The Eye of the Needle (1981) as a Nazi killer. Still, here he falls flat on his face, his wandering British accent laughable.

This was before his time away from cinema (due to the scathing reviews of this film), before he became a loud caricature of what he once was. Mercifully, he is relatively quiet here as a decent man trying to keep his son alive.  But he makes it hard to get past that accent: Bronx, New York merged with a Scottish brogue, and that’s only when he remembers to use it. At this point in his career, this performance marked his worst to date. His instant “love” for Daisy (Kinski) is hard to accept. Did she so believe in him as a soldier that she found him irresistible? In a sea of men, of course, Daisy would catch his attention, but after telling us how much he loved his wife, he falls for her in seconds.

By this point in his career, Pacino had shown his limits as an actor. In 1982 it was a comedy Author! Author!, where he was a playwright in the midst of a divorce with his second wife, fighting to keep the children. He has some nice gentle scenes with his son, portrayed by Eric Gurry, but beyond that the film is terrible and hopelessly predictable. And Pacino in a comedy as a writer and a family man? Pacino can do dark comedy, as he proved in Dick Tracy (1990), but he was woefully miscast in this film. It felt like a Neil Simon play, which might have helped, but then again nothing could help this mess. His next movie was Revolution. Poor Pacino, he must have suspected a Hollywood conspiracy, after all the glowing reviews he got in the 70s.

But Pacino and Sutherland were far from alone in being terrible.

Kinski is a disaster as Daisy, a rebel without a cause. Though she is said to have been born wealthy into an aristocracy, I never felt that from her. In fact, I felt nothing from her. And why does Daisy sound different from her entire family, with a strong, unidentifiable accent? She stands out like a sore thumb. I thought that maybe she had a different father from her siblings? But that still wouldn’t explain the accent if they grew up together. And why am I working so hard to explain the plot?

Sharp-eared audiences will recognize Richard O’Brien (Riff Raff in The Rocky Horror Picture Show) as the leader of the fox hunt. The Brits, to amuse themselves, use two men make Tom Dobbs and one other their target during a fox hunt.

There is nothing compelling about Revolution, nothing that draws us into the experience. I quite liked Hudson’s Greystoke: The Legend of Tarzan, Lord of the Apes because the film took risks in drawing us in with the dense jungle, the sparkling water, and the apes, including the mother of Tarzan, with the mesmerizing eyes. It was a tremendously underappreciated film. It had flaws, but nothing that should have prevented it from being a major work. Sir Ralph Richardson was an absolute delight as Greystoke’s doddering old grandfather, who knows his grandson “at a glance.” Andie McDowell as Jane could not shake her southern drawl and therefore was dubbed by Glenn Close. Other than that, I loved the film and named it one of the 10 best of 1984.

Most critics hated Revolution and it topped my Worst Films of the Year list. The film cost over $28 million and brought in just $350,000. Yep, did not even top $1M.  And the critics were merciless, replicating the bloodbath on the screen with their reviews. Some even invented new words so they could adequately describe just how bad it was.

Hudson went back to the film in 2009 and recut the movie, taking out ten minutes, losing this, adding that. But you cannot fix a abomination like this. I could understand what he would cut but could not fathom what would be worth keeping.