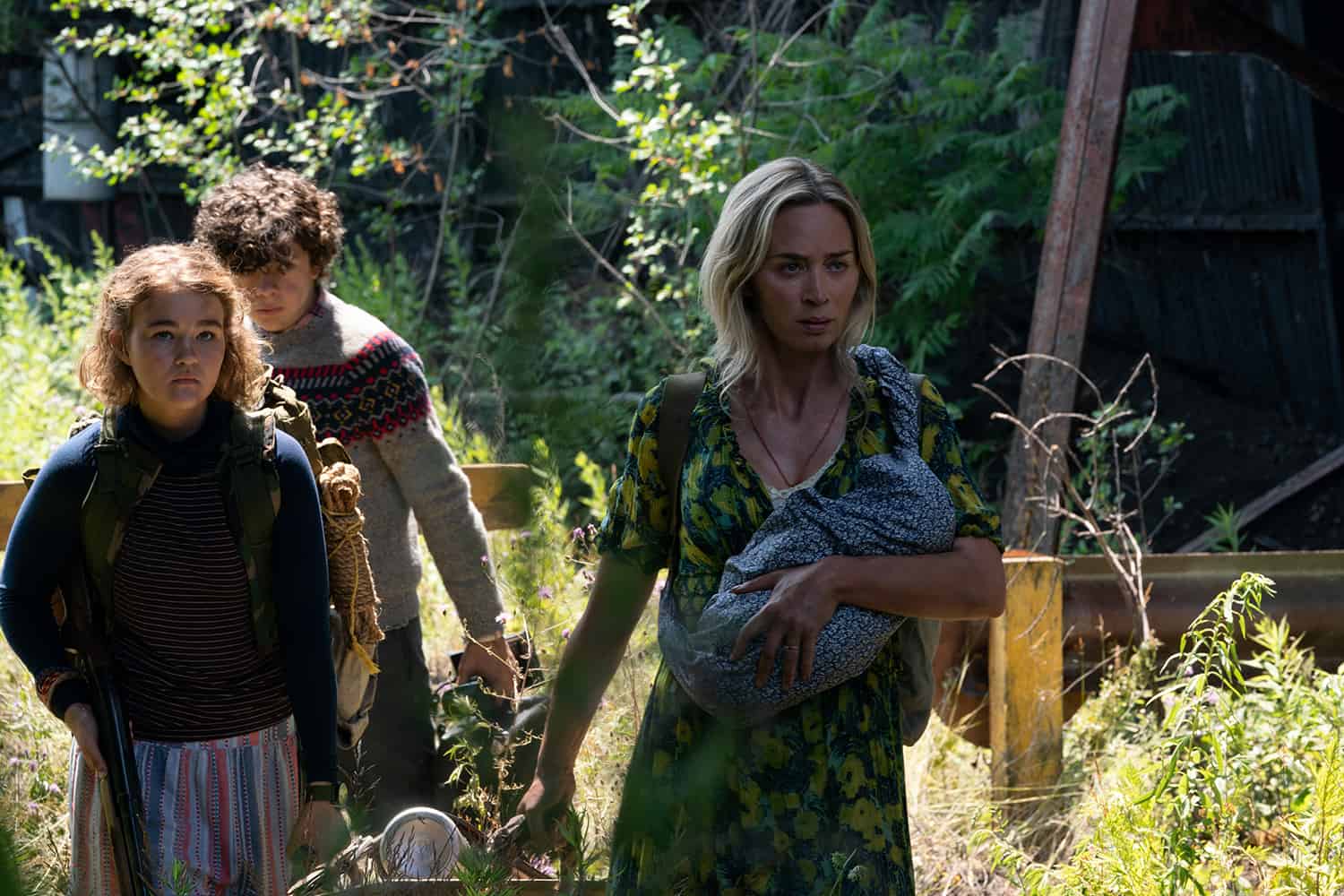 Actor John Krasinski’s A Quiet Place (2018) remains one of the most extraordinary directorial debuts in film history, a deeply terrifying horror film that used silence to build dread. Few humans are left after an alien invasion in which the aliens quickly wiped out most of humanity, hunting them down by sound like a heat seeking missile. Those remaining have learned to live in silence, but anyone with children knows that is impossible. In a shocking, heart-pounding opening, a family visits an abandoned drug store. When the parents’ backs are turned, their little boy takes a toy out of the store. As they head home through the woods, he pulls it out and turns it on, causing the sirens and bells to start, pitching the rest of the family into instant terror. As his father (Krasinski) rushes to him, an alien sweeps in and grabs the child, tearing him apart and consuming as it moves. It happens with such speed and ferocity, we cannot quite fathom what we have seen. Those early moments set the tone for the entire film, and Krasinski maintains that stranglehold on the audience throughout. The first-time director builds unbearable tension through the film, giving audiences one of the most original, and frankly, terrifying films of the last 25 years. A Quiet Place became a blockbuster, a surprise hit to everyone, and thrilling outcome for Krasinski, who was invited to create a sequel for Paramount.

A Quiet Place II was supposed to open last year just as the pandemic hit with extreme force. A series of bumped dates eventually led to an outright cancellation of release of the film last year, pushing the opening to this Memorial Day, which is where it hit theatres again with high hopes for similar results as the original. The chances of that are good given that John Krasinski has crafted and written a brilliant sequel, darker and deeper than the first, and at least an equal in character development, with genuine terror over the course of the film. As a horror film goes, it is without doubt a significant achievement, and one that should very quickly bring audiences back into movie theatres.

The film begins exactly moments after the first ended, with Evelyn (Emily Blunt) escaping the farmhouse where she and her family had lived a quiet safe life for years, managing to avoid the creatures attracted to sound. We know from the opening scene of the first film, the creatures spare no one. Now, with her husband dead, after he bravely sacrificed himself to save his children, and with no time to even grieve and feel the staggering loss she has endured, she packs her kids and newborn up and heads down the sand covered trail away from their safe haven.

Every sound made becomes a bone jarring event, and with each sound, we wait for the alien creatures’ scream and shocking entrance, smashing through walls to get at their prey or discover the source of the sounds. The director and his sound designer have again done a remarkable job of building dread, which turns into terror as we move through the picture.

The first film spent no time exploring the origins of the alien arrival. We were simply plunged into the events of this family trying to stay alive. The new film flashes back to Day One, with Lee (Krasinski) seen in town buying water and oranges for the baseball game down the street, where his son waits to go to bat. He speaks with Emmett (Cillian Murphy), a friendly neighbour in the stands, foreshadowing his involvement later in the film, but not with Lee. A meteorite screams across the sky causing the families to flee in panic, Evelyn and Lee in different vehicles. What Lee sees terrifies him. At blinding speed and ruthlessness he has never experienced before, the aliens attack, devouring people as they attack, eating them alive. Both Evelyn and Lee witness the horror but manage to escape with the kids alive.

Then we move ahead to Day 474, more than a year since the invasion, which has decimated the human race. The family, minus Lee, leaves the farmhouse, with Regan (Millicent Simmonds) having the foresight to grab her homemade hearing aids her father had created for her, knowing the aliens cannot abide the sounds they emit. Smart girl. With zero time to grieve her dead husband and his remarkable sacrifice, Evelyn is in survivor mode for her children: protect, protect, protect.

The action, or much of it, is confined to an abandoned old steel mill where that same father portrayed by Cillian Murphy is hidden, no longer a community man, having lost too much. Bitter, selfish, not initially supportive, but he will prove to be a friend to Evelyn. Forced into the mill by a serious injury, they have no choice but to remain in the place, knowing it lacks even remotely the comforts of the old farmhouse.

Emily Blunt seems poised to carry the film as Evelyn from the opening scene. Gutted by the loss of Lee, reflecting on his ultimate sacrifice, she barely has time to weep for him. But the hero of the film turns out to be her daughter, Regan. Furious with the loss of her father, and equipped with her hearing aid gear, she sets out in the hope of saving others. Simmonds is outstanding in the film, dominating each of her scenes, pulling the audience to her with her silence. Not since Holly Hunter in The Piano (1993) has an actress portraying a deaf character been so completely moving and strong. Both women are exceptional in fine roles written by Krasinski, who realized their depths and strengths. Her scenes with Cillian Murphy’s taciturn Emmett emerge with a growing tenderness and gentle beauty, both acted with superlative power.

In the first picture, the creatures were seen fleetingly, always moving fast, virtually exploding into the scene. But we never really got a good look at them. We do this time, as again they burst into each scene with an explosive power, taking humans in their jaws and claws and crunching the life out of them with effortless ease.

The actors in the film are all excellent under Krasinski’s obvious gentle direction, but the technical achievements of the film cannot be denied. Creating tension is a difficult thing in a film, especially a film in which silence is used so often. Every movement is important, every small sound, and the abject terror when a loud noise is made needs to be palpable. The key to both films has always been the realism and plausibility of the films. This could happen! And if it did, it might look like this. There is a very real poetry to the visual in the film, married to perfection to a superb sound design. Here’s hoping the Academy is paying attention. 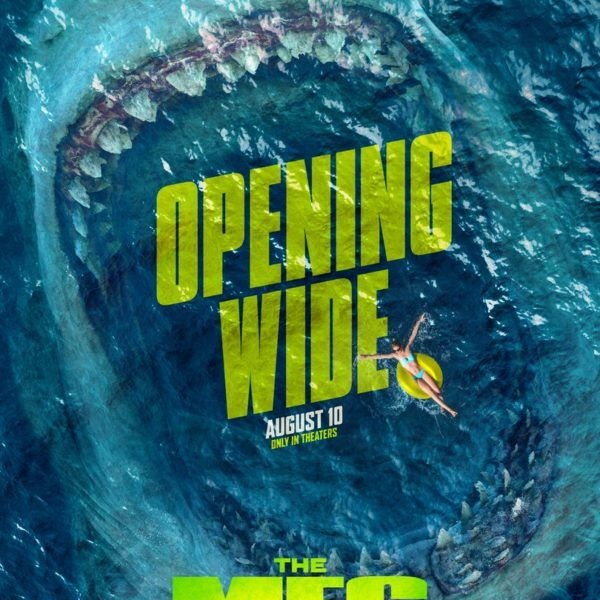 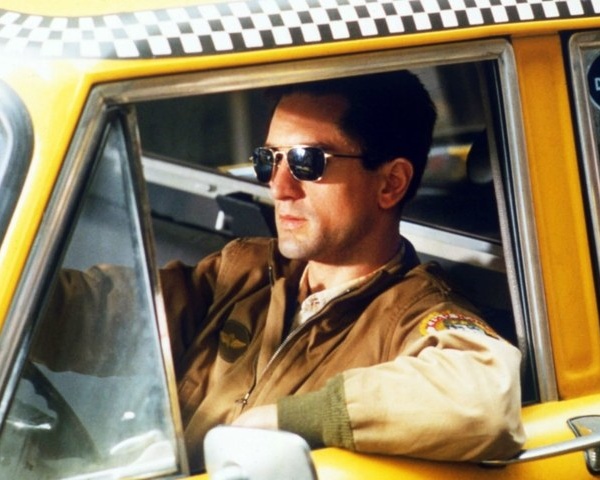