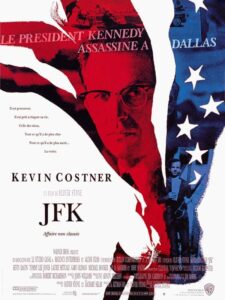 Walking into Oliver Stone’s JFK in 1991, I always thought I knew a little bit about the Kennedy assassination, but emerging three hours later, I realized I had known nothing and now I was convinced I knew who shot the President. The film is that convincing and that good and that accurate. We are presented several theories, but the one that makes the most sense was the one I have always believed.

There is a marvelous 15-minute sequence in Oliver Stone’s sprawling JFK (1991) which seems to solve the mystery surrounding the assassination of President John F. Kennedy in Dallas, on November 22, 1963. Sitting on a park bench in Washington, D.C., surrounded by the statues and beautiful white buildings of the government, a former military General known as X (Donald Sutherland) speaks to New Orleans District Attorney Jim Garrison (Kevin Costner) about his theory of the day Kennedy was killed. The single most important sentence he speaks?

“Who killed Caesar?” he asks.

Indeed, who would have that power? Who could put everything in motion, all the details needed to be in place to takedown the President? And so many coincidences surrounding the killing. How did Vice President John just happen to end up in Dallas that day after being told he was not going? Autopsy photographs of Kennedy show his brains hanging out the back of his head (sorry), but history and the government asks us to believe that Lee Harvey Oswald did the killing, hitting Kennedy in the back of the head with one of his miracle shots. The infamous Zapruder footage is enlarged to the size of a movie screen and we see it, as clear as that sunny day in Dallas, Kennedy is hit from the front, his head snapping back, the back of his head blown off. Brains and skull land on the trunk of the car behind him, which a terrified Jackie tries to retrieve for her fallen husband. Incredibly the Warren Commission, a group of intelligent government officials and intelligence men, took several months to come to the silly decision that Oswald was the lone gunman.

To me that is beyond stupid. Especially when you consider Oswald was then shot the very next day while being transported through the basement of the police station. Is it wrong to think the man who shot the President the day before, might not be guarded very well to allow a civilian to walk up and shoot Oswald in the gut? And his arrest? The day before Oswald, after supposedly shooting Kennedy, ran to a movie theatre and entered without paying a ticket. Hardly a deferral crime. Yet more than 40 police officers descended on the building, weapons drawn to take down Oswald. While in custody pages and pages of testimony disappear as he insists, “I am a patsy”. With very few answers given while in custody (we are told) would the government not have guarded Oswald a bit more carefully? Why was a civilian (if he was a civilian) permitted to walk through a security line in the basement, up to Oswald and fire close range into his stomach. How does that happen? Unless it was supposed to happen. It certainly served to silence Oswald, and Jack Ruby (Oswald’s shooter), terminally ill with cancer, died in jail. Pretty clean, cut and dried.

In Oliver Stone’s massive, sprawling film many theories as to who killed Kennedy are put forth, some wildly unbelievable, but there is one central theory that makes sense, has always made sense. The American Industrial Military Complex makes eighty billion dollars year. Wwhen there is war, that number rises. With the United States at war with Vietnam, billions were there for the taking. Yet Kennedy wanted to end the conflict in Vietnam, believing America had no right to be there, and he wanted to do much more. The CIA needed dismantling, and the FBI needed a work over, taking power from the longtime Director of the crime unit, J. Edgar Hoover, a dangerous man even to the President. Kennedy was suggesting sweeping changes to the United States, and those around him wanted no part of it.

So, it is suggested that an elaborate plot that could be tied to no one once Oswald and his killer Jack Ruby were dead, was placed in motion and on November 22, 1963, Kennedy was shot dead in Dallas. While a nation mourned in stunned silence, the government rallied and righted what had been wrong. Sworn in on Air Force One, Jackie Kennedy still covered in the blood and brain matter of her husband, Johnson went right to work. He insisted he not be more than five feet from the widow at all times and made clear she need not rush to leave the White House. By all accounts Johnson protected her and took care of her, but might have been aware of the carnage to be played out in Dallas and why. Was he in on it? I doubt it, but he certainly knew what was going to happen.

Many theories come at us, each with solid explanations, but it is the government which looks the most guilty and their bungling of the Oswald interrogation and his death while in custody followed by the insane Warren Commission report make them look very guilty. War is money and Kennedy planned to cut that off, which did not sit well with the money men who helped the senators and government officials get to where they now sat.

The Mob? Maybe but doubtful.

The Military? Why would they?

Cuba? They did not have the might to do it, plain and simple.

Why keep the report closed up to present day? What is in there they do not wish us to read?

Why was the security detail, military told to stand down?

How did news about the assassination make it to a paper in Australia hours before it should have?

Doctors stated Kennedy was hit in the throat and the head, both frontal wounds, while the government insists in the Warren Report, he was hit in the back of the head??

Why was Kennedy’s body whisked away from Parkland Hospital, placed in a casket and flown back to Washington before the coroner could properly examine him?

So many unanswered questions.

Only Garrison had the courage, or foolishness, to question what had happened, to dare to bring charges against people he thought responsible.

When Garrison shows the killing on camera, blown up to a massive movie screen, it is truly horrific. We see Kennedy hit in the throat and then his head comes apart, hit through the front, blood and brain matter splattering over Jackie and the back of the car. Jackie climbs out of the car to gather brain and skull fragments, put back into the car by the Secret Service agent who climbs on the back of the car to protect her as her husband slumps over dying. We see this over and over in the courtroom and it becomes absolutely certain that there was no way Oswald killed Kennedy. He might have been hired to do so, he might have fired a shot, but the kill shot came from in front of the fallen President.

Using several stocks of film, from 8, to 16 to 35 mm, Stone gives the film an interesting look, grainy images from a not too distant past. The technical aspects of the film are brilliant, from the Oscar winning cinematography to the editing, it is a technical masterpiece.

Stone’s sprawling film contains a massive cast of brilliant actors, some of whom do the best work of their careers. As New Orleans District Attorney Jim Garrison, Kevin Costner brought honesty and integrity to a difficult role. This was the perfect time in his career for the actor to portray this character, an honest man if integrity and Costner was perfection.

The star-studded cast of supporting characters range from brilliant to damned fine, standouts being Tommy Lee Jones, fey, elegant yet deadly as Clay Shaw, a dangerous man in the New Orleans underworld with a penchant for younger men. Kevin Bacon is excellent as one of those swaggering young men Shaw uses for sex, a brief appearance but rather electric. Joe Pesci is brilliant as David Ferrie, a homosexual who travelled in the same circles as Shaw, but was a constant nervous wreck, possessed by the belief they were coming for him too. Consumed with absolute terror we had never before seen the Oscar winning actor like this, truly terrified. Donald Sutherland was superb as X, the man telling Garrison what he knows and how close he is to the truth, matter of factly, with deadly delivery and honesty. And the list carries on, a showcase of American acting talent unlike anything before ever seen. British actor Gary Oldman portrayed Lee Harvey Oswald as he was, an enigma, a man we would never get to know or hear and thereby become unable to make decisions about him. He said he was a patsy, I believe him.

The film alarmed the highest reaches of the government when the screenplay was leaked and they got their hands on it. Whoever “they” are tried to have the film shut down, and articles were written about the manner in which Stone was stretching the truth. Oh really? As they had denied the truth for decades? Stone presented many theories, including the one that makes the most sense, that John F. Kennedy was murdered by his own government, an act of domestic terrorism.

Nominated for eight Academy Awards, there was never a chance that Stone would win a third Academy Award in six years, but the film did win the aforementioned two. 1991 was the year of The Silence of the Lambs, a most deserving winner. Stone in addition was nominated by the DGA for Best Director, his third nomination.

JFK has a unique place in history and I believe the film will be remembered for a very long time as it is without question a film for the ages.

Someday in the future the Warren Report will be opened and I think people will be shocked at just how accurate Stone is with his masterpiece of a film. A part of America died that day with their young President, the government was never again trusted. Even to this day. An electrifying experience. 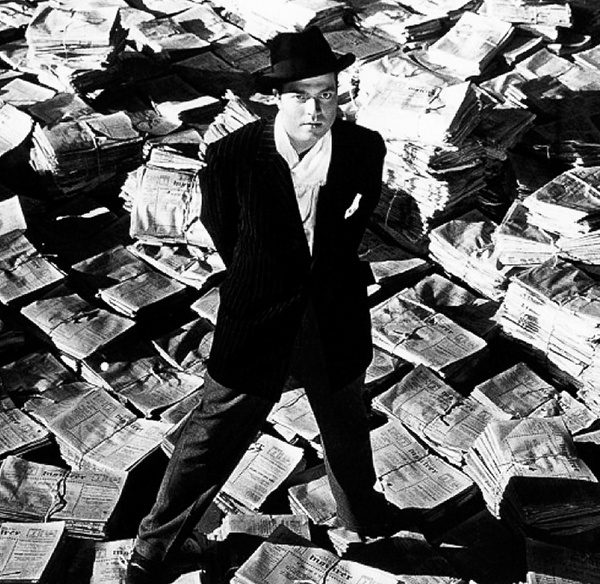 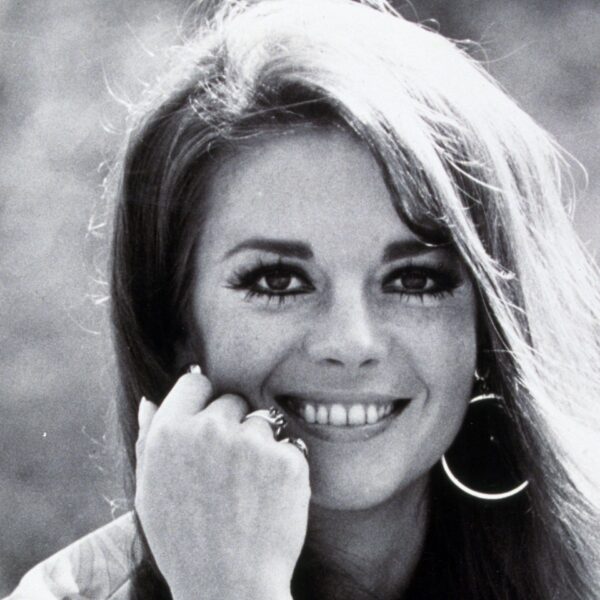