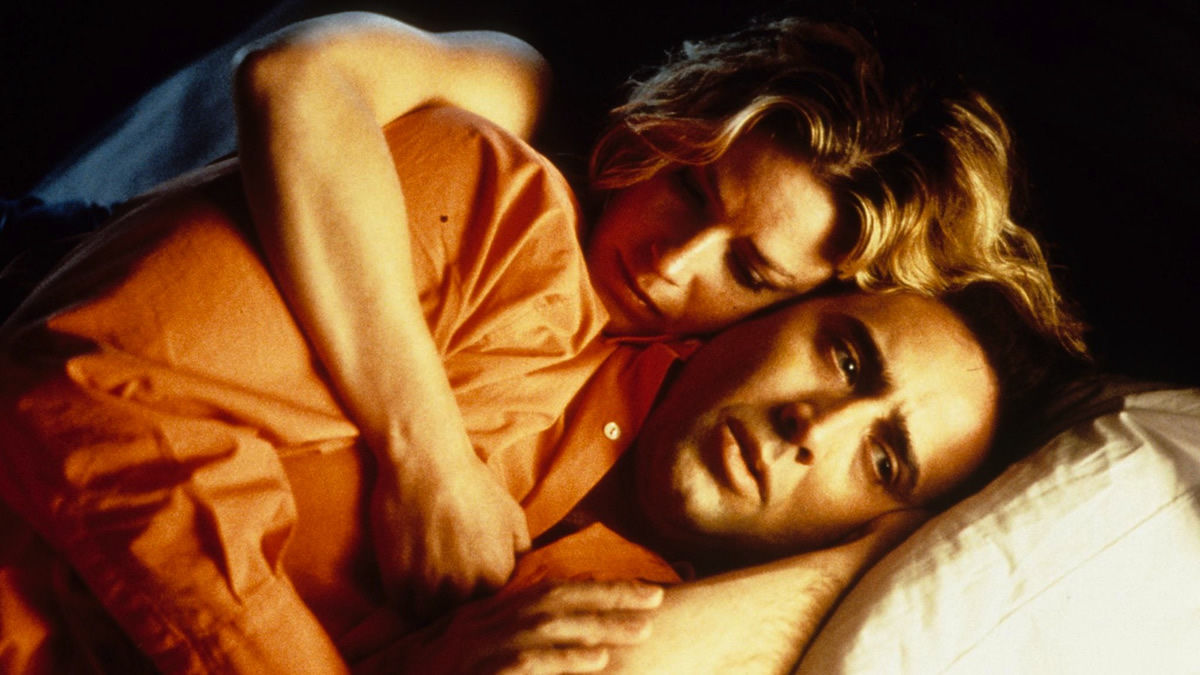 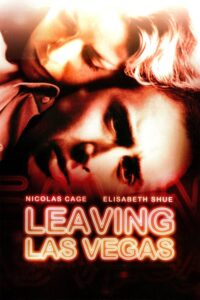 One of the most profoundly heartbreaking films I have ever seen, as a man Ben (Nicolas Cage) loses his job, his family and heads to Las Vegas to “drink himself to death”.

There he meets Sera (Elisabeth Shue), a pretty hooker walking the Vegas strip and they connect. Their first encounter he very nearly runs her down, she gives him hell and then flips him a slow-motion bird as she struts away. He is transfixed by her, by her walk, her long legs, her beauty. Controlled by Yuri, a vicious Russian pimp, Sera has no idea she has placed herself in danger by being with Yur, as the Russian mob is out to get him, and they indeed find him in Vegas and kill him, though he forces her to leave before they knock on the door.

She and Ben flirt with each other, he pays for a night where they just sleep and she finds him very sweet and sad. She is absolutely aware that he is going to drink himself to death, she knows and respects his plans, but invites him to stay with her so she can take care of him. And on his side he is aware she is a hooker, is genuinely shocked at her language and what she tells him he can do to her, and that she has sex with strangers for money, and gently tells her he is not crazy about it, but it is where she is in her life at the moment. He is indifferent. They enter into a strange agreement, he lives with her so she can take care of him, and he can drink more, having saved money. He pays her rent, they take care of each other as best they can, as much as he allows.

Mike Figgis shot Leaving Las Vegas on 16mm, in Vegas, often without permits, grabbing shots where he could on the streets and in casinos. It was shot very cheaply, less than $5 million dollars, and when it premiered at the Toronto International Film Festival it was an immediate critical darling. A true independent film, much of the critical focus was for the two lead performances of Nicolas Cage and the lovely Elisabeth Shue, who until this film had been career dead. Figgis remembered her from an audition years before and felt she was perfect for the young hooker falling in love with Ben. Each was brilliant in their portrayals of two people tossed on the trash heap of life, but who find one another, and for Sera at least, Ben is someone to live for.

The film begins with Ben’s story before his firing, borrowing money from an obviously humiliated friend at dinner in a restaurant with friends, who tells Ben not to drink it in here. He makes an utter fool of himself in the bar he goes to, hitting on a pretty young businesswoman before being asked to move away from her and leave her alone. When his assistant walks into his office she finds him talking on an upside down phone, faking a meeting with a client about a script he is trying to sell to get made. Already soused very early in the morning, she knows why he has been summoned to the boss’s office, and I suspect Ben does too.

Listen to the truly pathetic apology he offers his kindly boss, “I’m sorry” he offers to the man as he is handed a huge check. He tells his boss it is far too generous, and the boss tells him they really enjoyed having him around. Asked if he has any plans, Ben announces he is moving to Vegas.

Going home he burns all reminders of his previous life, puts a neat row of packed garbage bags on the curb and takes only what ne heeds to allow himself to drink himself to death. He dances happily through the liquor store loading bottle after bottle into his cart, preparing for his journey to his doom.

Ben is a contradiction, he is not a depressing drunk, nor an angry one. Ben is in fact quite happy, even content with his decision and what is happening to him. He never stops drinking, 24/7, though there are times he is less drunk than usual. When he spends time with Sera through the day he is usually not without his booze, but not in excess. No, that comes later. They become friends, he moves in with her, she falls in love with him knowing she can never ask him to stop drinking, and he falls with her. Yet, incredibly, they never have sex! Ben drinks and she cleans up the mess, they go to a casino and when cut off from alcohol, Ben causes a huge scene that gets them banned from that casino. They journey into the desert to a spa and Ben’s drunken behavior gets them kicked out of there as well, another degrading episode for Sera. She eventually cannot take it and asks him to leave after he cheats on her with another hooker. Going out on a call with a group of very young men, she is raped, beaten and sodomized, returning home in the morning to be seen by her nosy landlord, who evicts her, now aware of what she does. Sera sits in a shower weeping, blood leaking out of her vagina, her body covered in bruising, when she receives a call from Ben, now on his deathbed, hovering near death.

Of course she goes, she loves him, to find Ben with a terrible case of the DT’s, unable to get up from the filthy bed. Yet somehow he has an erection. She climbs on top of him, removing her panties and straddles him taking him inside her. Moving back and forth towards orgasm, they both climax with Ben’s last words being “Wow”. Beneath her he is dead, but the love they felt for one another has liberated her from her life as a hooker to seek out something else. In their own way, Ben is always with her.

Nicolas Cage gave one of the most acclaimed performances of the decade earning Best Actor awards from the L.A. Film Critics Association, the New York Film Critics Circle, the National Society of Film Critics, the National Board of Review, the Golden Globes, the Screen Actors Guild, and the Academy Award. The performance was hailed as the finest creation of an alcoholic ever put on the screen. For several years Cage had been on the rise as one of the finest actors in the business, he and his friend Sean Penn together had rose up through the ranks. Ironically Penn would give his most acclaimed performance to date in 1995, as a doomed Death Row killer in Dead Man Walking (1995). He would be Oscar nominated for Best Actor for the performance but lose to Cage.

For his preparation to play Ben, the actor visited alcoholics to learn from them and had a friend shot footage of him drunk to get a handle on how his voice sounded when smashed. He meticulously studied his movement, his stumbling, his erratic behavior, all of it to capture with honesty what it was to be a drunk. It was an interesting, though perfect choice to portray Ben as a sweet natured drunk, neither angry (unless cut off or denied liquor) or mean spirited. Where I think Cage soared was in capturing the DT’s that come with drying out or withdrawing from liquor, truly haunting. If the actor works another 30 years I doubt he will ever surpass his work within this film, he is truly exquisite.

Elisabeth Shue was no one’s first choice, except Figgis for the role of Sera, but after seeing her, you can’t imagine anyone else. With her girl next door beauty, as Sera she is damaged, having been sold, cut and abused by her vicious pimp who is on the run from mobsters who plan to kill him, and will kill her if she is found with him. His one decent act is to send her away before they knock on his door. Like Cage, the actress interviewed hookers on the streets of L.A. and Vegas to find the mindset to find Sera, and given the frank honesty of her performance, I would say she found it. But more, not only did she present the honesty in her performance, she inhabited that world, she was Sera. Along with Cage she was a multiple awards nominee but sadly for Shue not a winner. Never again has she risen to these heights.

Leaving Las Vegas is a deeply sad film, truly heartbreaking as these two haunted people looking for love or something more find each other when Ben is finished with life. It is not that he wishes to die, more that he does not wish to live anymore. I recently lost a friend to that very thing, he did not want to die, but could no longer bear the burdens of this world. Both Ben and Sera have loaded themselves down with these burdens, she has the strength through his love to escape, he does not.

Far too filled with authenticity to be deemed “a little film”, it is an American masterpiece with two sterling performances that tower among performance art in the nineties. 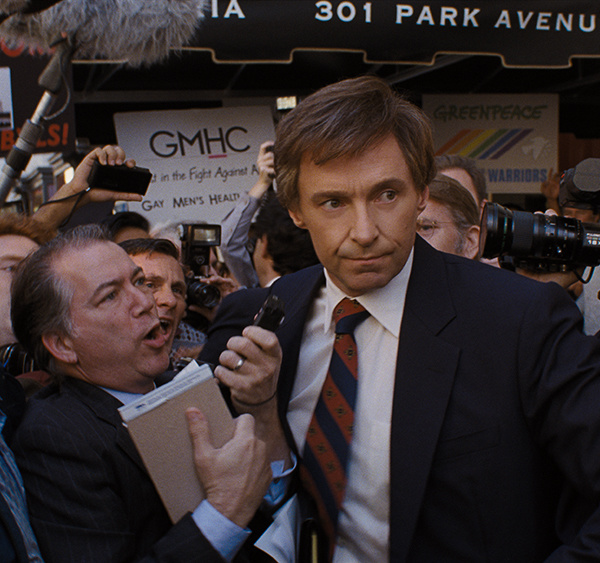