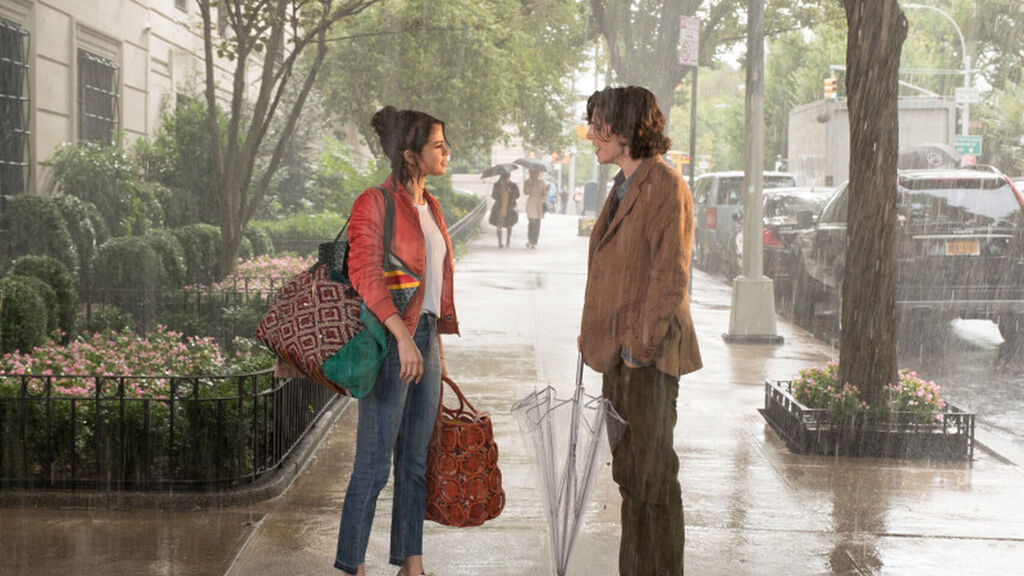 Why is there not more Oscar buzz for Woody Allen’s new, long delayed film A Rainy Day in New York, now streaming on Amazon? This is his most purely delightful and intoxicating film since the magical Midnight in Paris (2011), which earned him Oscar nominations for Best Director and Best Film and won him an Oscar for Best Screenplay. Allen has dominated American comedy since the seventies, averaging a film a year, sometimes two, directing and writing at a furious pace, work seems to be all he does.

Where to start with A Rainy Day in New York?

After spending some time in Europe making films it is wonderful to see Allen back in New York City, in the restaurants he frequents, the hotels, and Central Park. He is at home here and makes us feel as though we live there too. The characters he has created are a lovely mix of stock Allen characters with original wunderkinds, best of all Ashley, portrayed beautifully by Elle Fanning. On the rise for many years now, she started acting at four, Fanning is the gifted younger sister of Dakota, also a brilliant actress, but lately the edge goes to Elle. Having watched and loved her performance in Catherine the Great in the new mini-series, aptly titled The Great, and loved her, I was anxious to see what she could do with a plum Allen role. 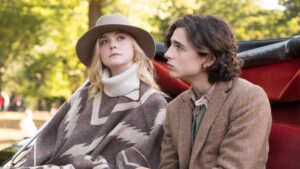 Gatsby Welles (Timothee Chalamet) is a drifting young college man, addicted to gambling, but very good at it, attending a college with no plans for his future. His family is wealthy, and he despises their life, feeling they are indulgent and pretentious, wanting no part of it. When his giddy girlfriend Ashleigh (Fanning) is given the chance to interview a famous film director for her college paper, it involves her going into to New York City, so Gatsby suggests they make a weekend of it and he can show her the real New York. When they get there, Ashleigh finds herself enchanted by the director, a self-absorbed Roland (Liev Schreiber) who makes equally self-absorbed films that critics love, but audiences cannot make heads or tails of. Inviting her to a screening, it is clear he is infatuated with her. She blows off her plans with Gatsby, but he is having an adventure of his own. Reconnected with high school friends who are shooting a film, he meets, again, Chan (Serena Gomez) the lovely younger sister of his former girlfriend. Chan is a sharp-tongued young lady who does not suffer fools or pretention and she is quick to cut Gatsby down to size every chance she gets.

When Ashleigh again blows Gatsby off to attend to a lawyer’s devastation of discovering his wife is having an affair, he is enraged. It becomes worse when he sees her on television with a popular movie star known to be a seducer of young women, then discarding them, Francisco, portrayed by Diego Luna. That is his limit. After winning $15,000 at a high stakes poker game, he offers a gorgeous hooker $5,000 to go to a party with him that his snooty mother is hosting for her equally snobby friends. The moment they arrive, the mother is on to the ruse, and we discover why. When she and her husband met, she too was a hooker, and fell deeply in love with her trick, giving him her savings to launch their company into a multi-million-dollar business. Stunned by what she has confessed to him, Gatsby now sees his mother in a very different light, possibly understanding her she never did.

The next day he and Ashleigh take a carriage ride around the city, and he ends it with her, knowing they come from different worlds. He arrives at one of his favourite parts of the city at 6 p.m, and is shocked that the lady he should be with arrives, looking for him, knowing he will be there, because they are meant for each other.

As with most Allen films, A Rainy Day in New York is beautifully acted, especially by the ladies (no surprise) and Fanning nearly steals the show. Her deliriously happy, often smiling, not terribly bright knockout is the sort of girl guys love, because she is drop dead gorgeous and has a wicked body. No one is asking her deep questions, because no cares what she thinks, not even Gatsby, who ends it with her when he realizes they are not compatible. Even her pathetic questioning becomes more heartbreaking with each, “I don’t understand” becoming more and more mournful. For most of the film she is a giggling, dazzling beauty, intoxicated by the presence of the movie stars and film director who instantly fall in love, or lust with her. Fanning does a marvelous job capturing being every man’s desire, but not really being aware of it, nor caring. She is about to sleep with movie star Francisco because it is Francisco, not because she is particularly interested in him when he reveals himself to be a liar and a player. Fanning has become one of the most charismatic and interesting young actresses working in movies, surpassing the gifts of her older sister, Dakota. Here she is like a Judy Holliday without the edge and sarcasm, merged with early Goldie Hawn, cute, fun but not the brightest bulb.

The most pleasant surprise within the film comes from Selena Gomez, who is superb as the caustic, tell it like it is, Chan. Though initially she comes off as bitchy and nasty, she in fact is not but rather does not suffer fools and is more like Gatsby than any girl he will ever meet. Gomez has a dark beauty and confident manner on screen and gives a superb performance as Chan.

Chalamet plays the role that Allen himself would have portrayed in the seventies, though he would have had to age him and alter the storyline a tad. He does a good job with the character, but less so with Allen’s dialogue and never really finds the rhythm in the manner John Cusack did in Bullets Over Broadway (1994), nor does he come anywhere near the dead on impersonation of Kenneth Branagh in Celebrity (1998). Gatsby is as smitten with himself as he is with the woman of his dreams, hypothetical of course, and deep down he knows it is not Ashleigh, but he does not want her bouncing around from guy to guy while she is with him either. Chalamet is a fine actor, no question, but he never seems to get a real handle on his character here. Love the name though, Gatsby Welles? Very cool.

Jude Law and Live Schreiber have so little to do I question why they took parts in the film. Oh wait, because it is Woody Allen! Schreiber fares better with more screen time as the wickedly self-centered, arrogant film director who is obviously enchanted by Ashleigh, but equally focused on his latest film. Law, while great to see him onscreen again, he has so little to do except profess love to Ashleigh. I wish each had more to do because they are excellent actors.

I have never cared for Diego Luna as an actor, too forced, too aware of his own cuteness (which means nothing to me), not once have I seen him give an authentic performance on screen. Casting him as the Spanish movie star must have meant Antonio Banderas was not available.

Vittorio Starraro, possibly the greatest living cinematographer (Apocalypse Now, Reds, The Last Emperor), handles the duties here and brings the busy streets of New York to life. Nothing flashy, he just explores what Allen loves about New York as he always does.

All in all, A Rainy Day in New York is an excellent Allen film without being one of his classics. But Allen at near great is good enough for me. 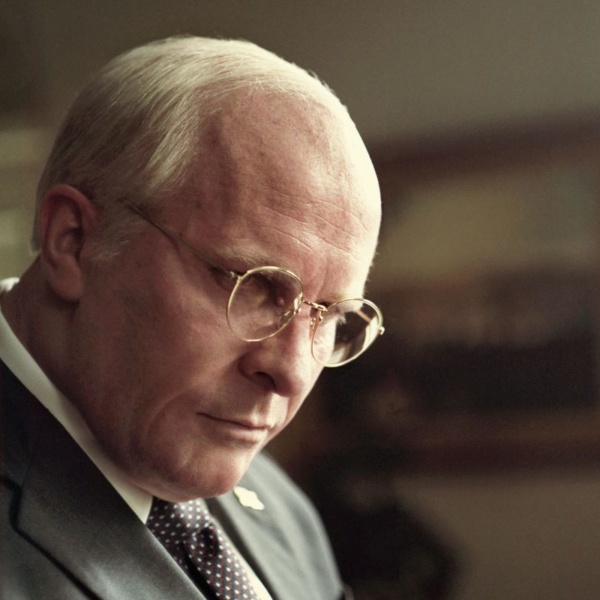