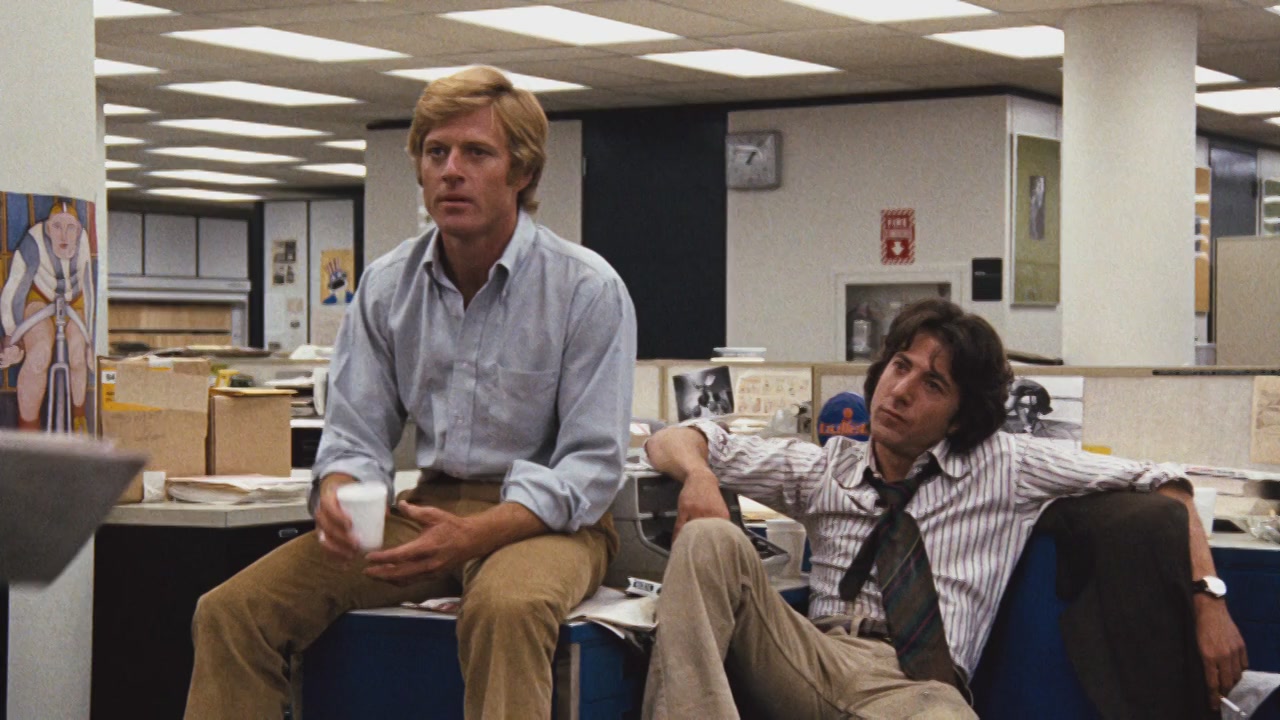 Yes, a tie. I agonized over both, but in the end had to tie them. It is not cheating, I do it again in 2012, it does happen. In 1976 both films were topical and foreshadowed or dealt with history honestly and profoundly. First, only because alphabetically it comes first, I will explore All the President’s Men. 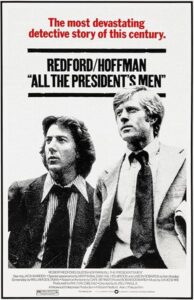 Robert Redford, always a political activist, bought the rights to the book written by the two reporters who exposed Watergate, Carl Bernstein and Bob Woodward. He knew in his gut it would make a terrific film because it was a modern day David and Goliath story that happened to be true, filled with intrigue, with one door opening at a time, leading to the highest office in the land. What began as a bungled burglary would reach inside the walls of the White House and turn out to be ordered by President Richard Nixon. Both men were reporters at the Washington Post and when they had a hunch they ran with it, sometimes supported, challenged more often by their editor Ben Bradlee, who believed in his boys but was painfully aware if they blew the story it would end all of their careers and could be the death bell for the paper.

For me the single most important scene in the film is relatively silent, the only sound a low rumble on the track of the score and the sound of thousands of library index cards being searched. The two reporters, dubbed “Woodstein”, are in the Library of Congress flipping through index cards looking for names, and the camera rises above them, higher, ever higher until they look like insects in the massive library trying to find a clue, trying to uncover what they believe is a plot. It shows just how small the men were in the grand scheme of Washington and the government, and the near insurmountable forces they were fighting in order to prove their story.

Redford hired William Goldman to write the screenplay from the book, and director Alan J. Pakula to direct the film. Each choice was perfect, because Goldman made sense of the sometimes confusing events that led to the President resigning, while Pakula saw the film as a thriller, a race to prove their facts over the most powerful in the world, known to be corrupt.

Knowing a great role when he read it Redford decided to portray Bob Woodward himself, casting Dustin Hoffman as Carl Bernstein (resemblance was uncanny) and filled the film with great character actors such as the great Jason Robards as Ben Bradlee. Martin Balsam, Jack Warden, Jane Alexander, and Hal Holbrook filled out a strong supporting cast that would prove to be a magnificent ensemble, with no star turns, just a taut, tight group of actors all dedicated to telling the same story.

Goldman’s superb screenplay tells the story in chronological order, from the night of the break-in at the Watergate hotel, where five men were caught breaking into Democratic National Headquarters intent on planting bugs for surveillance purposes. Woodward was assigned to the news but was quickly, and rather in an unorthodox manner, joined by Bernstein, whether he liked it or not. As they dig deeper and begin to understand what they have uncovered, the men become a team, each bringing their own unique strengths to the work. The small clues are what intrigue them, what really gets their blood pumping, comments such as “Oh God” or “Oh no…” when asked if they knew anything about the break in. When they connect Howard E. Hunt to the break in, the flood gates begin to open, and they are contacted by a White House insider known for three decades only as Deep Throat. The insider fed them tidbits of information, though it is clear he knows so much more than he should.

The two reporters know they are under the gun, know that Bradlee is watching their every move, even more so after they publish a story that is false, but like every good reporter, Bradlee smells something big and sticks with his boys. While they are investigating, Nixon wins a second term as President in the greatest landslide in Presidential history, bringing into question whether or not the people will accept what they are writing about a beloved leader. Yet they chip away, raising doubts, bringing into question the honesty of the President, and leaving Americans questioning what exactly was on the Watergate tapes found. Seems Nixon bugged the White House, including the Oval Office because the brilliant though deeply troubled man did not trust anyone, not even those in his closest circles. As he is giving his victory speech we see the two reporters doggedly typing their story, two years later, Nixon would resign in disgrace.

Pakula’s decision to create the film as a thriller was the perfect choice because there were events that transpired that left the two men reporting the story believing their lives were in danger, something Deep Throat told them. Is it so outlandish to believe that the President could not quietly order the execution of two reporters? Not at all. But Nixon knew all eyes were on all decisions coming out of the White House and he could make no such decision. Would he if he could have? Who knows? What is known is that Nixon was a great statesman, a brilliant leader and master of foreign policy so ordering the killing of two reporters investigating him, would forever damn him. 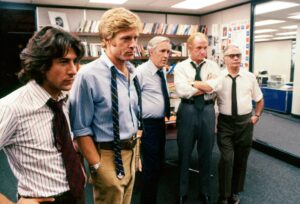 An exact replica of the Washington Post editorial office was built on a soundstage in Hollywood for the film, right down to the wastepaper in the baskets bearing the Post logo. It must be startling today for young people seeing grown men and women hammering out letters and numbers on old typewriters, the noise in the editorial office a buzz of clicking and clacking and bells going off. Understand when the two men were investigating, they had no internet, no social media, this was old time style reporting, lots of digging, interviewing, dead ends and even humiliation but worth every bit when they landed on something they needed. The faith Ben Bradlee had in the two was inspiring and gave them the courage to keep going, keep digging. It told them, our boss believes in us, believes the story, we cannot let him down.

The performances in the cast were uniformly superb. Redford and Hoffman do no grandstanding, they have no great dramatic moments, their work is filled with tension throughout, even when mounting paranoia hits them and they are frightened they believe they are being followed. The two actors settle into their roles and the ensemble like the professionals they are, bringing absolute realism to their characters.

As Ben Bradlee, Jason Robards was a revelation giving a brilliant performance as the tough old newsman who had risen through the ranks to Editor of the influential, powerful Washington Post. Long revered as a stage actor, Robard’s greatness from the stage had never really transferred to the screen until now, he was electrifying and dominated every scene he was in.

Audiences and critics responded to the film, loving the urgency with which Pakula told his story, allowing this political thriller to be a box office success in the spring of the year. Critics raved about the picture and, true to form, did not forget the film at the years end. The New York Film Critics Circle named the film the year’s finest movie, as well as awards for Best Director and Best Supporting Actor (Robards). The National Society of Film Critics awarded the movie Best Film and a second award for Robards, the Directors Guild of American nominated Pakula as one of the five Best Directors of the Year, and the film was nominated for eight Academy Awards. On Oscar night the film took four of its nominations – Robards won Best Supporting Actor as expected, and Goldman won Best Screenplay Adaptation, while awards for Best Sound and Best Art Direction were also taken. Incredibly, in a year which included All the President’s Men, Bound for Glory, Network and Taxi Driver, the year’s Best Picture turned out to be the Cinderella story Rocky (1976).  Howls of protest greeted that Oscar win, because clearly there were three Best Picture nominees that were films for the ages, which Rocky, though very good, was not.

In the years since, All the President’s Men has influenced some of the finest films made about news reporting including the sensational Zodiac (2007). To look back now, and see the difficulty reporters had in nailing down a story, the endless closed doors, hang ups on the phone, threats and knowing they were knocking on the doors of people who feared them, must have been frightening. That Woodstein accomplished what they did was something very unique in American history. The two reporters for the Post brought down the President of the United States, the most powerful man in the world, trapping him into lies. Kind of timely once again is it not? 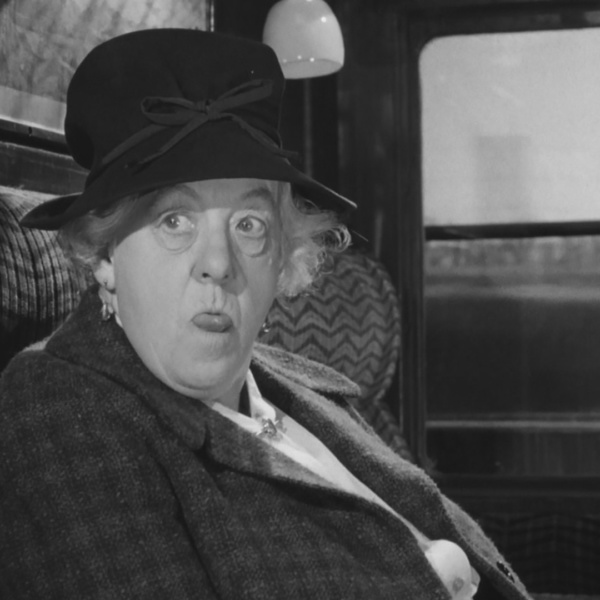