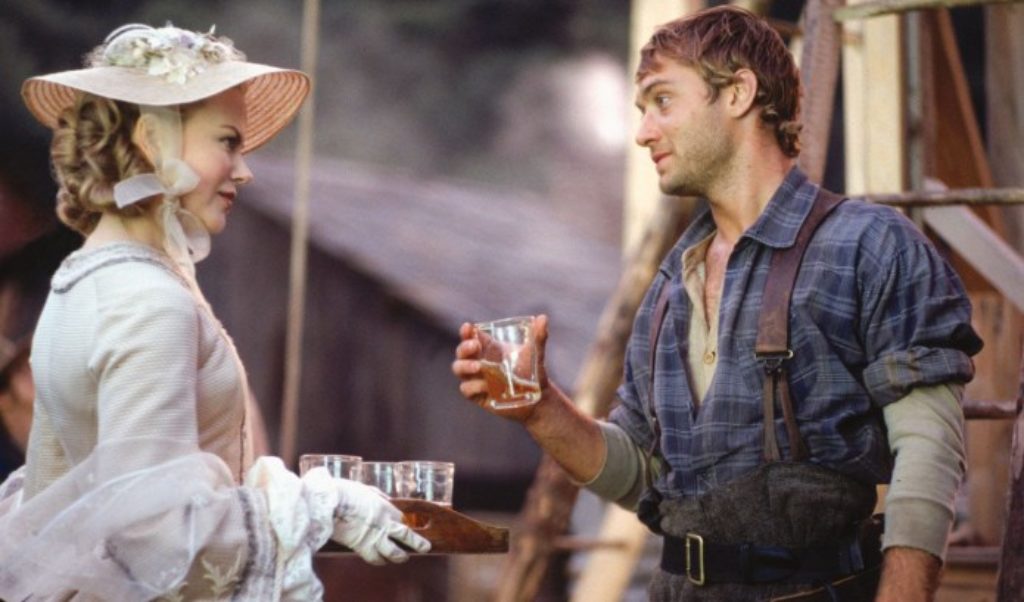 There are several love stories weaving their way through the narrative of this superb Civil War drama, each unique in its own right, each with a profound impact on the characters and the story. Directed by Academy Award winning director Anthony Minghella, who won his Oscar for the wildly overrated The English Patient (1996), he directed better films after that one, The Talented Mr. Ripley (1999) and this one among them. Based on the book by Charles Frazier, Cold Mountain was among the hottest properties in Hollywood for a few years before it was finally green lit into production at Miramax. Tom Cruise has stated among his greatest regrets was not taking the role of Inman when it was offered, but he was tied up making Minority Report (2002) with Steven Spielberg, so not a bad trade off.

My wife always felt this was a superb love story filled with longing between the two lead characters, but I once asked her to look deeper, she did and agreed with me, that there were a bunch of love stories in this film.

Inman (Jude Law) is a quiet, hardworking young man who meets Ada (Nicole Kidman) shortly after she and her father, a preacher (Donald Sutherland), have moved to Cold Mountain. War is imminent, but the two have enough time to develop a friendship that both want to be something a great deal more. Though they do not spend a great deal of time together, they do kiss and commit themselves to one another, she promising to wait for him when he goes off to fight for the South. The narrative makes you believe one can fall in love with a person at first site, provided they are each willing to grow. Shortly after Inman leaves for war, Ada’s father dies, leaving her to fend for herself in ways she has never had to do before, and with no skills to do so. She lives off the kindnesses of her neighbours until Ruby (Renee Zellweger) wanders onto her property announcing, “You need help, here I am”. Rough and tumble, but as skilled at farm work and hard work as any man, Ruby takes charge and the farm is soon a working thing of beauty and the two women learn from each other. When Ruby’s drifting father Strobold (Brendan Gleason), deserted from the war, shows up with his fiddle and partner, a simple-minded young man, Prangle (Ethan Suplee) and Georgia (Jack White) a guitar player. They must be kept hidden as the Home Guard patrols the area, and now drunk with power, do and take what they wish.

Meanwhile Inman is off fighting the war, but after being horribly injured and nearly dying he begins the long, dangerous journey back to Ada. She writes to him, that wherever he might be, place down his rifle and come home, and he does. The roads are patrolled by Home Guard and the military, told to shoot on sight deserters or bring them back to be hanged in public. Inman encounters an oversexed preacher (Phillip Seymour Hoffman) who he turns in to the man’s congregation, a treacherous farmer who feigns a need for help (Giovanni Ribisi), a kindly old goat farmer (Eileen Atkins) who mends his wounds, cares for him and feeds him before sending him on his way and, in a stunning 20 minute sequence, Sarah (Natalie Portman) a broken, lonely widow tending to her child. She feeds him, before sending him to the corn shed to spend the night but craving human connection, she invites him to sleep in her bed with the condition “It don’t need go no further.” He complies and holds the heartbroken young woman through the night as she weeps out of a desperate sense of grief and loss, her head on his chest, his arm around her. The next day they are threatened by Yankees where Inman saves her, but sad Sarah shows her hand, gunning one of the men down in outrage when her child is placed in peril. 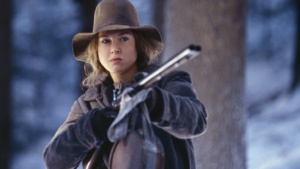 Back on Cold Mountain, Ada and Ruby have become the very best of friends, Ada reading to her friend by lantern in the night, Ruby running the farm, turning it into something quite grand, sustaining them. The Home Guard of course ruin it all killing Pangle and shooting Strobald sending Ruby and Ada up the mountain to save his life were Ada finds Inman making his way back to her. He is just in time to fight the Home Guard, on another killing spree, this time meeting their match.

The film explores the deep longing for a loved one better than any but a single film – A Very Long Engagement (2005) – the extraordinary French film. The terrible sense of being alone that has enveloped the characters in the film is heartbreaking yet they each in their own way find solace in the most unexpected places. Who would think Ada and Ruby would become as close as sisters, possessed of a deep, unbreakable love? Who would think Ruby would fall for Georgia and forgive her father for the past? That Ada and Inman would be reunited however briefly, their love bringing a lovely girl into the world. Surrounded by love, Ada is able to move on, to create a very good life on Cold Mountain, with the people who love her best and who she loves to have around her dinner table.

The performances are uniformly superb across the board, beginning with the exquisite Nicole Kidman as Ada, who evolves from a prim young lady who can read and talk with intelligence into a fierce warrior who can run a farm and fire a gun with deadly accuracy. More concerned with her books than surviving, once she encounters Ruby the two become a force of nature, with Ruby teaching Ada how to survive with little, and Ada brings to Ruby the beauty of literature and music, giving the mountain girl, for the first time in her life, a friend. They are sisters by the time the film ends, tightly bound forever. Both Kidman and Zellweger are wonderful together, and granted Zellweger had the showier role, but Kidman is no less brilliant.

As I stated previously, my wife always believed Cold Mountain was at its core a profound love story, and she was right, but it is also a series of love stories, not just one. Watching the deep longing Jude Law brings to Inman is shattering. Fighting a savage war until he has just had enough killing, he walks away and is walking literally back to her when they find one another. No ministers, no churches are needed to marry these two, they do it themselves before spending what will be the only night together, they ever have. Law is superb and richly deserved the Oscar nomination he received.

Zellweger is always in motion, a workhorse who seems to think if she stops for a second, everything she has accomplished might fade away. Though enraged most of the time at her father, portrayed by Brendan Gleason, she cannot help loving him, just as she cannot help loving Ada as they slowly become friends, and partners in their farm. For her performance, Zellweger won her first Academy Award, for Best Supporting Actress, adding a second for her riveting work as Judy Garland in Judy (2019).

The film’s most breathtaking sequence for me is the scene with Inman stumbling into the home of young Sara, a house filled with heartbreak despite the presence of a child. Portman is shattering in the sequence, quietly weeping as she curls into the warmth of Law’s embrace to sleep, likely for the first time in many a month. She too was Oscar worthy.

Phillip Seymour Hoffman, Giovani Ribisi, Donald Sutherland and the entire cast are uniformly excellent through Cold Mountain, and director Anthony Minghella brings a haunting intimacy to the film along with an epic scope. Though he died very early, this was without a doubt the Oscar winners’ greatest film, Minghella never directed anything stronger than Cold Mountain. Unforgettable.