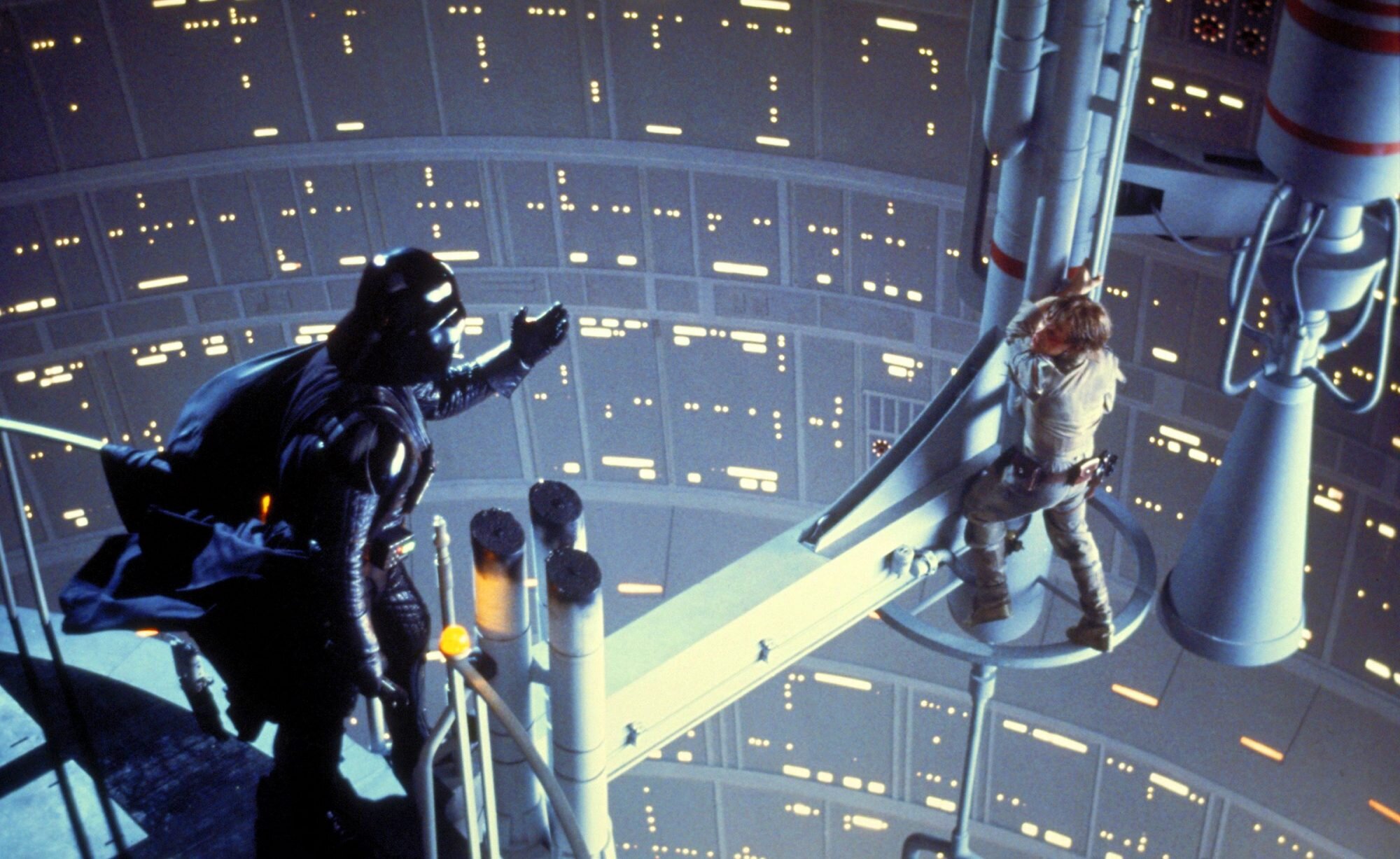 Once upon a time, 40 years ago in a theatre in Oshawa, in a galaxy far, far away, sat 500 people. They were there to see the single most anticipated film of the year, the first sequel to Star Wars (1977) entitled The Empire Strikes Back. I was among that audience with my girlfriend of the time, my eyes glued to the screen. Near the end of the film it happened, as Luke Skywalker (Mark Hamill) was locked in a ferocious light saber battle with the towering villain Darth Vader, his breathy voice provided by James Earl Jones. Questioning Luke about how much he knew about his father, the boy responds that Ben Kenobi told him Vader had killed his father.

Oxygen left the cinema as the entire crowd took a sharp intake of breath, a collective gasp, and then silence. Not a sound could be heard with the exception of what was happening on the screen in front of us. I am not sure anyone in that theatre took a breath for the rest of the film … I know I did not. Stunned by the greatest twist in a film I had ever seen to that point, we shuffled out of the theatre blown away, knowing it would be another three years before we saw the outcome to this revelatory moment. I knew two things: I would be first in line to see the next film, and I was coming back to see this one the next night.

Forty years have passed since I first saw The Empire Strikes Back, the second of the three first Star Wars sequels, yet it seems like yesterday to me. Movie moments such as this, so iconic they are seared onto my memory are instantly recalled when thinking about them, running like a YouTube channel in my mind. It remains one of the most stunning gut punches I have encountered at a film, and I have never forgotten that feeling. 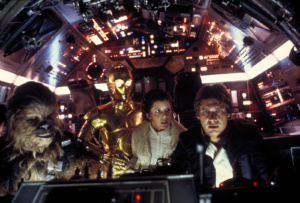 The Empire Strikes Back is a bigger, bolder grander and much darker film than the original Star Wars, and like The Godfather Part II (1974), surpasses the original in every aspect. George Lucas it must be noted did NOT direct the film, instead choosing to produce the film, handle the effects at Industrial Light and Magic and the finances in making the film. Given the hundreds of millions he had made from Star Wars, he no longer required finances from 20th Century Fox to make the film, able to finance the project himself. To direct the picture he chose his former college professor Irvin Kershner, well known in the independent cinema world which was still an underground world in the seventies and eighties. Kershner took the job with one promise from Lucas being that he would never interfere with what he was doing. They had meetings, they had many discussions, but Lucas did not step in and direct the film through Kershner, this was his film.

It picks up three years after Princes Leia (Carrie Fisher) draped medals of valor onto the chests of Luke and Han Solo (Harrison Ford) and the rebellion continues. The Empire is rebuilding the Death Star and Vader continues his relentless pursuit of Luke. The film opens on the ice planet Hoth where Solo saves Luke from a snow creature before the empire arrives on the rebel base. Luke leaves them to continue his training on the swamp planet Dagobah, where he encounters the tiny Jedi master Yoda. At first unbelieving that he can’t learn anything from this strange little creature, he comes to realize that Yoda is an all-powerful being, with powers of the Jedi that Luke had never imagined.

Meanwhile Solo and Leia are betrayed in the Cloud City by an old colleague of Solo’s, Rando Calrissian (Billy Dee Williams) and poor Solo is sent to Jabba the Hut for a bounty, frozen in carbonite.

Luke leaves the swamp planet to go to war with Vader in the Cloud City which leads to the famous showdown between the two.

The film ends with Luke communicating telepathically with Vader, believing that indeed Vader is his father. Yoda has blessed us with the knowledge that, while Luke is thought of the last hope of the rebellion, “there is another.”

With a grand operatic sweep, Kershner made a spectacular adventure film with the imagination of the artists at Industrial Light and Magic (ILM) creating the stunning planet world and many creatures within the film. One sequence stands out. Han has landed the Falcon on a strange planet with a porous ground to it and realizes how dire their situation is without saying much. As he speeds the Falcon out of where they are, a cave we assume, we realize his concern. A massive set of jaws can be seen closing at the entrance/ exit of the cave. As Solo speeds the Falcon out of the cave to safety a massive space slug lunges at the speeding ship to complete the startling moment.

The planet Hoth is impossibly white, the huge war walkers lumber towards the rebel outpost firing at them, the swamp planet Dagobah is a marvelous creation and Yoda, well, he is extraordinary. A puppet controlled and voiced by Frank Oz, Yoda was the single most popular new character introduced in the film, and audiences adored him at once. With oddly structured sentences when he spoke, he has since become one of the most quoted of all Star Wars characters.

As the middle film, one might think the ambiguous ending might hamper the film, but instead is among the greatest strengths of the picture. We know what is coming, we understand as the ship with Luke blasts into hyperspace, free of Vader (for now) setting up the third film and at once tweaking our interest.

The visual effects were much stronger, having had time to perfect them. The art direction was magnificent, and the John Williams score darkly majestic. I think Williams deserved another Oscar for this film, but it was not to be.

Nominated for a measly four Academy Awards, the film won a special award for visual effects and the Oscar for Best Sound. Being a stronger film than Star Wars, it seems a horrible cheat that The Empire Strikes Back was not the leader in nominations for 1980, and it was robbed of a Best Picture nomination it so richly deserved.

History has been kind to the film, and it is now regarded as the finest of all the Star Wars films, the prequels and sequels. Sadly, Irvin Kershner never really parlayed the staggering success of this film to a stronger career.

That to me is a real tragedy because The Empire Strikes Back is regarded as one of the greatest films ever made. 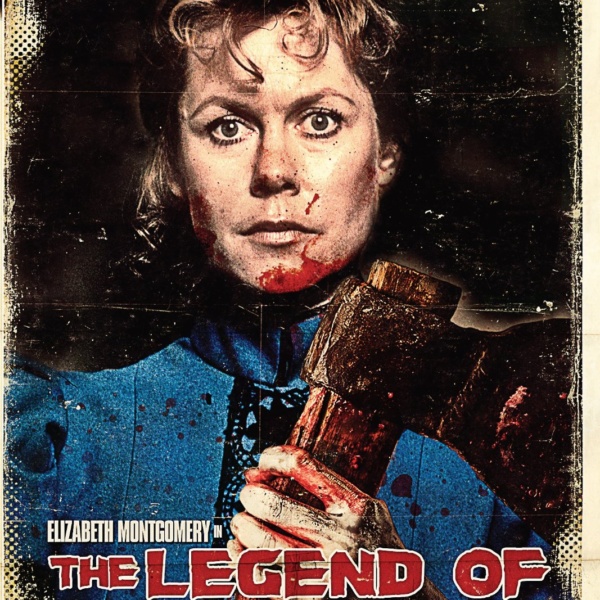 Revisiting THE LEGEND OF LIZZIE BORDEN (1975)