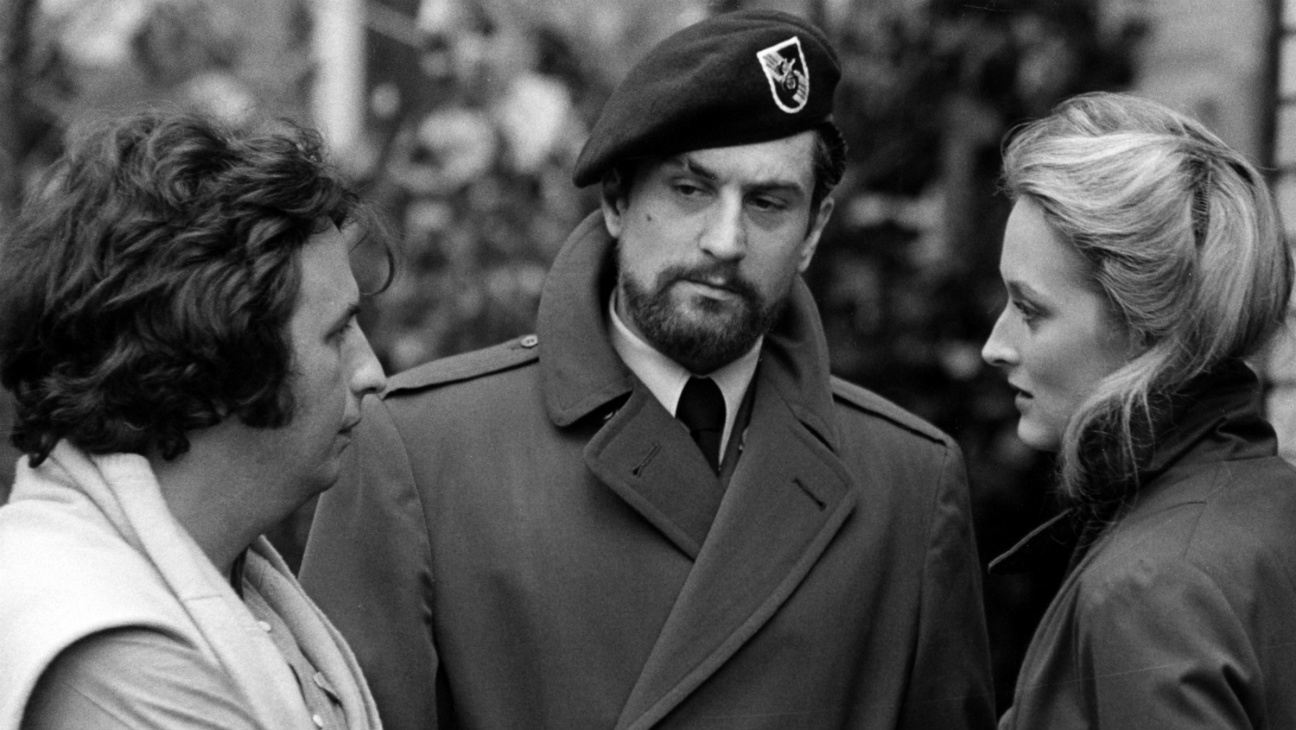 Is there a more polarizing figure in American cinema than director Michael Cimino? An Academy Award winner for his study of friendship in small town America, before and after service in Vietnam.  He sat atop the heap in Hollywood only to fall from grace very quickly, forever ruined after Heaven’s Gate (1980) his forty four million dollar western which ruined United Artists, one of the oldest existing studios in Hollywood circa 1980.

In his superb new book “One Shot: The Making of The Deer Hunter” author Jay Glennie documents the creation of the film and the legacy of the work in the years after. With extraordinary access to the archives of Robert De Niro, interviews with the two-time Oscar winning actor, as well as Meryl Streep, Christopher Walken, John Savage and Jeff Bridges, Glennie creates a compelling making of story second to none. Despite your thoughts on the film, and I struggle mightily with it, you cannot help but plunge into this massive volume and consume it like a perfectly cooked steak. 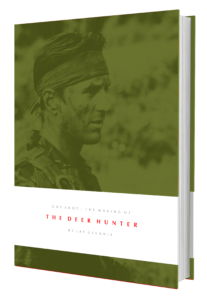 Coattail Publications could easily become the “go to” publisher of books about the making of great films, with another volume on Performance (1971) currently out and another one on Trainspotting (1996) due next year.

What I found exceptional was that Glennie pulled no punches in his exploration of Cimino, a gifted artist, no question, but a hugely ambitious, arrogant, narcissistic man who was not above betraying or stepping over those in front of him on his way to the top. With just his second film, he found himself the most discussed filmmaker in the business, and while the climb might have been swift, the fall was a slow painful ordeal that would impact his work for the rest of his life. Never again would he enjoy the acclaim he did with The Deer Hunter, never again would he be trusted, or for that matter believed by the press.

The Deer Hunter began as a script entitled The Man Who Came to Play, written by Quinn J. Redeker and Louis Garfinkle and was purchased by producer Michael Deeley. The script was about a group of men who go to Las Vegas to play Russian Roulette for big money, which in its own was an interesting concept. Impressed with the commercials Michael Cimino had created, and the film Thunderbolt and Lightfoot (1974), he brought Cimino in to doctor the script and see if there was something in there worth turning into a film. Cimino brought in Deric Washburn to help him with the script and they began the process of writing, but very quickly it soured between the two of them, and though they had finished the screenplay, Cimino attempted to get full credit. This was a foreshadow of things to come.

Deeley was delighted with what they had done to the script now called The Deer Hunter, though he locked away his concerns about Cimino wanting full credit for the work.

Reading the book one thing I had always suggested became very clear, Robert De Niro had a great deal to do with the creation and subsequent success of the film. De Niro took part in casting, working with the actors, even directing some of them when they were stumped as to where their character was going.

Cimino had an eye no question, and the look of The Deer Hunter was always beyond reproach. He tapped into the essence of small-town American as no other filmmaker ever had, showing friendships that were deeply intimate, behaviour that anyone growing up in a small town had witnessed, the first ninety minutes of the film were utterly breathtaking. The bar scene, where the men all sing along to Franki Vallie and the Four Seasons, “Can’t Take My Eyes Off of You” was remarkable, and though it looks entirely improvised, every detail was planned, and executed to perfection. That profound moment when Michael and Nick sit beneath a lamp post and Nick declares “I love this fuckin’ town” is pure visceral poetry, a sense of Americana at his most honest and raw. It was as though Cimino was documenting what was happening in this town for real, as though the actors had slipped under the skin of the characters.

Hailed as a masterpiece when it began screening in the late summer of 1978, everyone who was anyone wanted to see the film. It would open for a week in December to qualify for the Academy Awards and whet the appetite for its release a few weeks later. Universal had concerns with the length of the film, three hours, recognizing it would be shown less over the course of an average day in theatres, thereby cutting into profits, but this is how they let it go out after countless tantrums from Cimino and support, again, from De Niro. Cimino had already signed his next deal with United Artists, whom, had they waited a few weeks, might have saved themselves from bankruptcy.

During the press interviews for The Deer Hunter, Cimino lied. He did not stretch the truth, he did not fib, he shamelessly lied to the press, which is just foolish. The press digs, the press looks for proof of what they are told and if they do not find it, or worse discover you have lied to them, all hell will break loose. With Cimino, well, it did indeed break loose.

Cimino told them he had been attached to a Green Beret unit in Vietnam, that he had served his country.

He had never been out of the United States until he shot the film. He talked of the atrocities committed by the Viet Cong as though he had seen them, painting them as vicious monsters, which they were not. An imposing enemy? A great fighting machine? They were that, but no less monstrous than the young Americans. And Cimino, had seen no atrocities because the truth was, he was not there.

And it was reflected in his film, where the Viet Cong are portrayed as unfeeling killers. “Mow!” the leader shouts, slapping the terrified men in the face as he hands them a weapon containing a single bullet, expecting them to fire the bullet into their brains. Maybe it is in the chamber, maybe not. It was a rather savage depiction of the Viet Cong that was soundly criticized and protested by tens of thousands, including actress Jane Fonda. 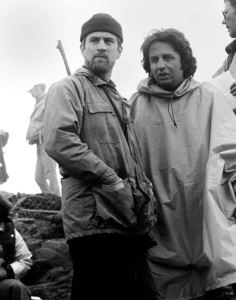 There is a feeling in Hollywood that exists to this day that if the lies Cimino told, and they were legion, had come out before the Academy voted on the winners of the Oscars for the year, neither Cimino nor The Deer Hunter would have won. For me the year’s best was clearly Coming Home (1978) directed with gentle, haunting power by the great Hal Ashby, the finest film of his career.

The Deer Hunter has moments of undeniable power, the Russian Roulette sequences in the POW camp are among the most visceral, terrifying sequences ever put on film. The performance of John Savage captures raw, primal terror in a way I have never before or since witnessed. That beautiful opening ninety minutes, lyrical, pure visual poetry and so beautifully acted by the entire cast, but especially De Niro, Streep, Walken, John Cazale and Savage.

Glennie’s book is a beautiful volume, handsomely illustrated with thousands of photographs, many directly from the personal collections of the actors and studio, but more important are the memories they shared with the author. Beautiful stories about John Cazale, the gifted actor who was dying during the films making and never lived to see the finished film, his insurance paid for by Robert De Niro when the company refused to insure the actor suffering with stage four lung cancer. The compassion with which Cazale was treated on set and by the film’s producers was genuinely beautiful, a loving example of humanity in a business frequently not known for its decency.

I love that Glennie was honest about Cimino, who by all accounts was a megalomaniac, obsessed with power. Michael Deeley was horrified that Cimino wormed a producer credit out of his work and claimed the script he had adapted was original. The true Cimino came out during the making of Heaven’s Gate (1980) when his blatant contempt and disregard for his producers and the studio, drove the budget to more than three times its original number.

Two years after winning the Academy Award, two years after his backhanded insults to Francs Ford Coppola, Cimino was all but finished. Coppola’s Apocalypse Now (1979) might not have won the Oscars The Deer Hunter did but it was a far more regarded film then and now. Cimino would direct again, Year of the Dragon (1985), being the best of his last films. Never again was he close to that Oscar stage.

HIs following with actors remains legion, they adored him. I have often wondered why he went into seclusion, why he refused to defend himself against the allegations leveled towards him by United Artists and Steven Bach (which must be true) or the attacks he endured over The Deer Hunter?

Nonetheless, none of that takes away from this magnificent book, which documents with extraordinary insight one of the most polarizing films of the seventies. Far and away the finest making of book I have read in 35 years of being a working film critic and historian. 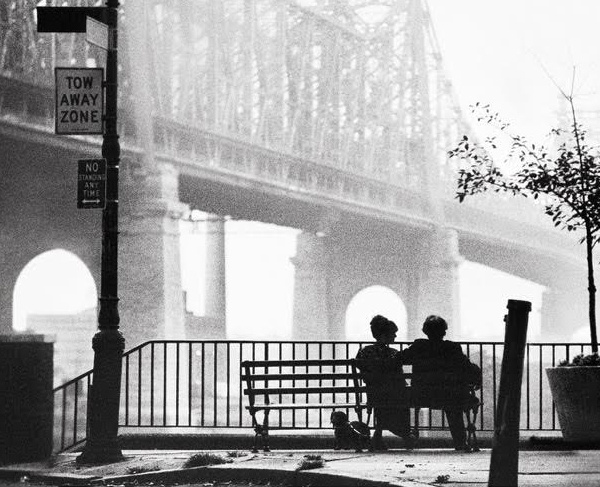 THE GREATEST AMERICAN FILMS OF THE SEVENTIES: #13