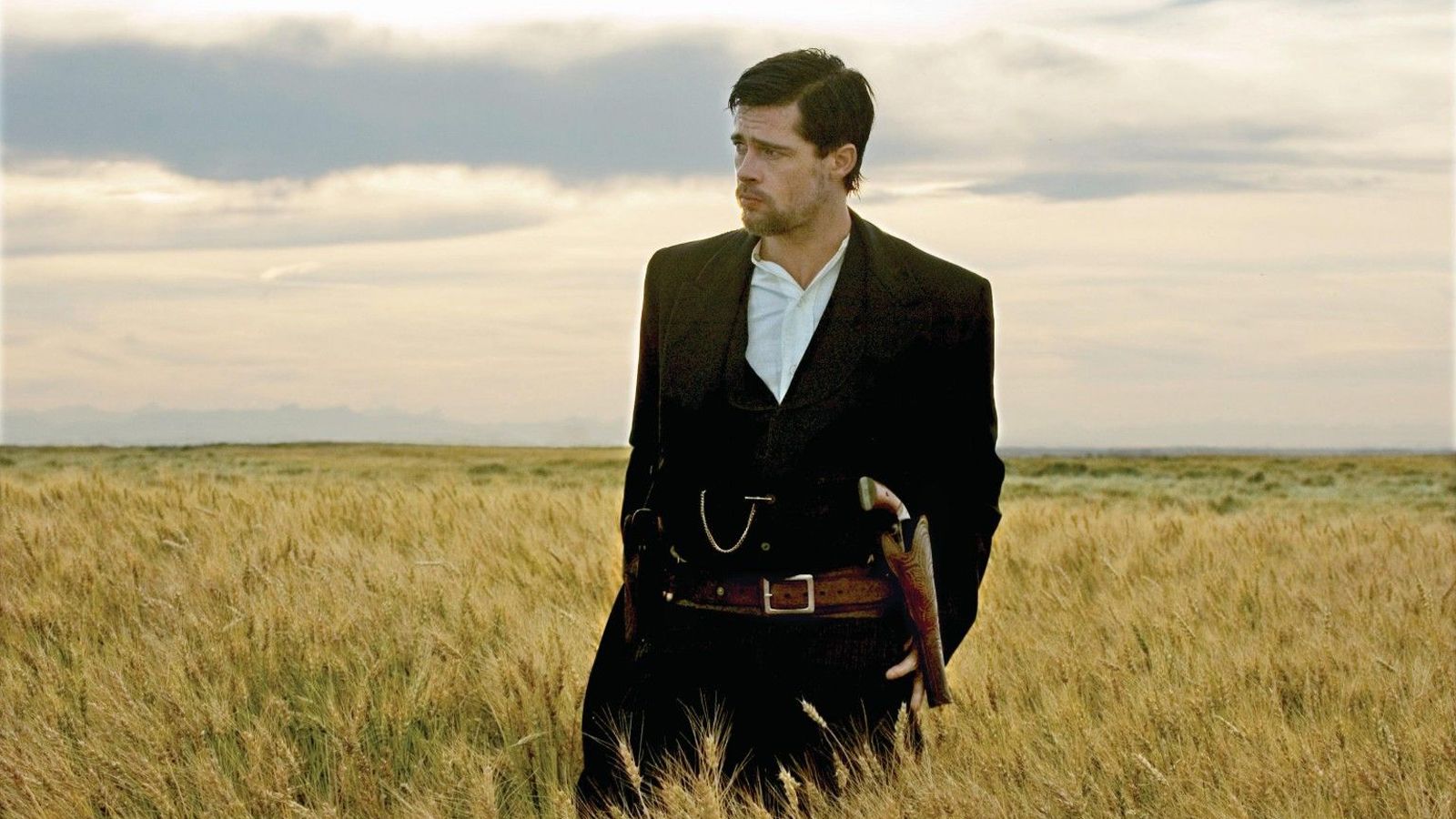 Let’s start by stating throughout this article the film The Assassination of Jesse James by the Coward Robert Ford will be known as just Assassination for obvious reasons.

I was in a full theatre the first time I saw this film, in the excellent Special Presentation category, my favourite, at Tiff in 2007. I had read the book and known about the American outlaw Jesse James since I was five years old. My father loved stories of the Old West and happily shared the tales with my brothers and I, eventually introducing us to movies about the famed gunslingers. My brothers loved Billy the Kid, but I was always more interested in Jesse James because of his ruthless nature, yet he was a devoted husband and father. To me he was a walking paradox, one I could never figure out.

The local library had two large books which I checked out often, reading over and over the tales of his exploits, his murders and of course, his own terrible killing. Jesse was at one time among the most famous people on earth, and this is before 1880 when news travelled slow. Yet his exploits were renowned around the globe, he was as famous as Mark Twain and Abraham Lincoln.

On film Jesse James has been portrayed by Tyrone Power, Robert Wagner, Robert Duvall but, best of all, here by Brad Pitt who captures superbly his charisma and danger. James was a killer, lethal with a gun, and absolutely fearless. He hid in plain site, passing himself off as a cattleman, though he made few close friends. His family moved often, his children did not know his real name or what he did, but his wife Zee did.

In the film Jesse and his brothers’ gang are planning one of their many train robberies and Charlie Ford (Sam Rockwell) has brought along his kid brother Bob (Casey Affleck) in hopes he can join the famed James gang. Starry eyed, like a kid meeting a rock star, Bob has followed Jesse’s exploits since he was a child and is in absolute awe of the outlaw. Jesse takes a shine to young Bob and uses him to run errands for him until he tires of him. Jesse is very aware of how enamored Bob is of him, but silently watches him close, as though they were doing a bizarre dance back and forth with each other. Jesse sends Bob away eventually, but when looking for his cousin who has disappeared, Jesse shows up unannounced at the Ford home where Bob’s sister rules the roost. 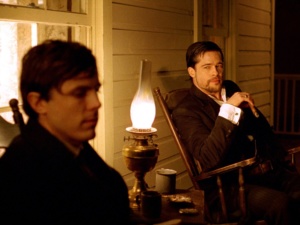 It is here we first see how dangerous and truly manipulative Jesse can be. Instinct tells the outlaw the Fords know more than they are saying (he is right), and he pushes Bob into losing his temper, skulking off, Jesse summons both Bob and Charlie to come with him with plans of a bank robbery. Unknown to Jesse, Bob has met with the law, promising he can hand them a Jesse, dead or live. Realizing members of the James gang are being killed by Jesse, Bob makes a decision to act. But is he right to do so? Jesse makes him an extravagant gift of a nickel covered pistol, a beautiful and expensive weapon which delights Bob.

But when Jesse’s mood turns dark, he takes off his guns to dust a picture on the wall of his home, and Bob shoots him in the head with the very gun Jesse bought for him.

Instantly famous, most people toast Bob, while others cuss him out as a coward. Nearly 900 times he recreates the killing on the New York stage with brother Charlie as Jesse. Often the audience catcalls that Bob was a coward or cur, and he leaps off the stage challenging the caller in the dark theatre to come forward.

He becomes reviled in America, hated for gunning Jesse down, though Jesse very likely was going to shoot the Ford brothers. So consumed with guilt and sadness over the death of Jesse, Charlie Ford kills himself.

Bob is killed eventually in the tent saloon he runs, always wondering why he was never applauded for killing Jesse. In the end, ironically, he missed his outlaw friend as much as anyone and forever regretted killing him.

As Jesse James, Brad Pitt is genuinely frightening, laughing a little too loud at bad jokes, trying too hard to put everyone at ease when his very presence is like that of a rattlesnake, poised and ready to strike. Everyone around him is on edge, hyper alert to his mood swings which move from melancholy to blind rage. It is among the best performances Pitt has given, not to mention the most accurate depiction of Jesse James on film. It was said rooms got hotter when Jesse came into them, clocks slowed, and Pitt makes us believe that of Jesse. Why he was not nominated for an Academy Award as Best Actor I will never understand.

As Bob Ford, Casey Affleck is a revelation slipping under the skin of this bizarre young man to give an astonishing performance. We see all too clearly the hero worship towards Jesse with the growing realization Jesse means to kill him. Edgy, deceitful, almost wormy, Affleck is fiercely brave as a man who became hated in America. He was awarded with a nomination for Best Supporting Actor.

There are strong supporting performances from Sam Rockwell, Sam Shepard, Garrett Dillahunt, and Jeremy Renner, each perfect in their vital role.

Director Andrew Dominick created the film with an almost burnished look to it, sepia tones, with skies often rushing past as we hurtle to the fateful day Jesse died. When shooting through glass, he captures the curves in the glass as it was forming, as well as the wide-open spaces of the West and the tight, claustrophobic surroundings of homes of the time.

Shot with stunning beauty by Roger Deakins, this was the only other Oscar nomination the film received. A shame as Assassination deserved at least eight.

One of the greatest American westerns, I hope future generations discover this masterful work of art. 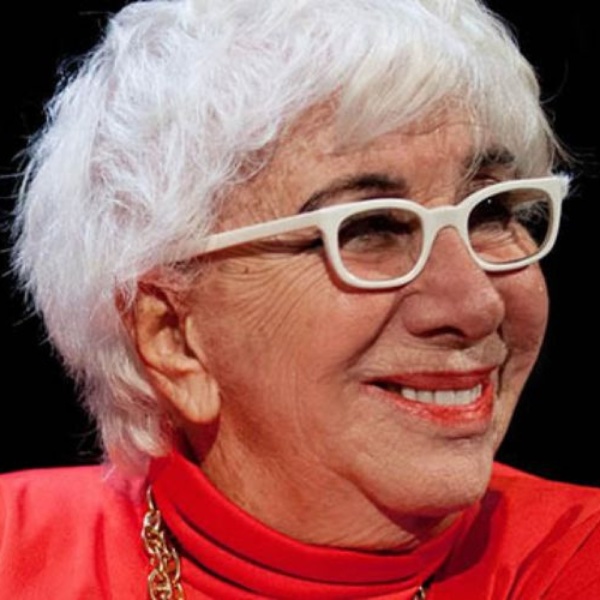 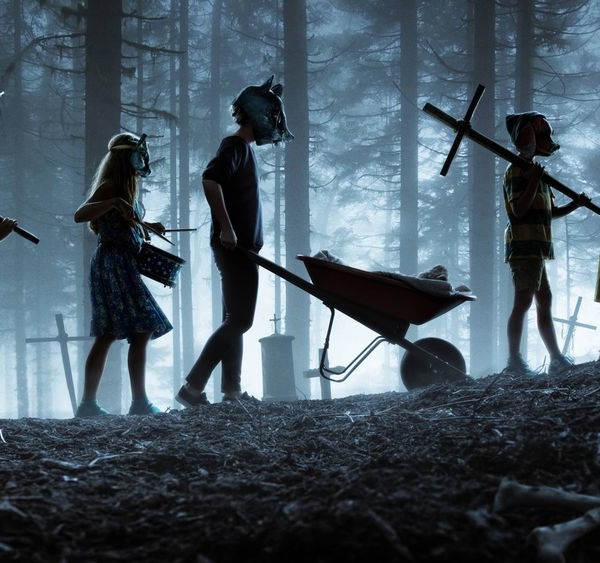