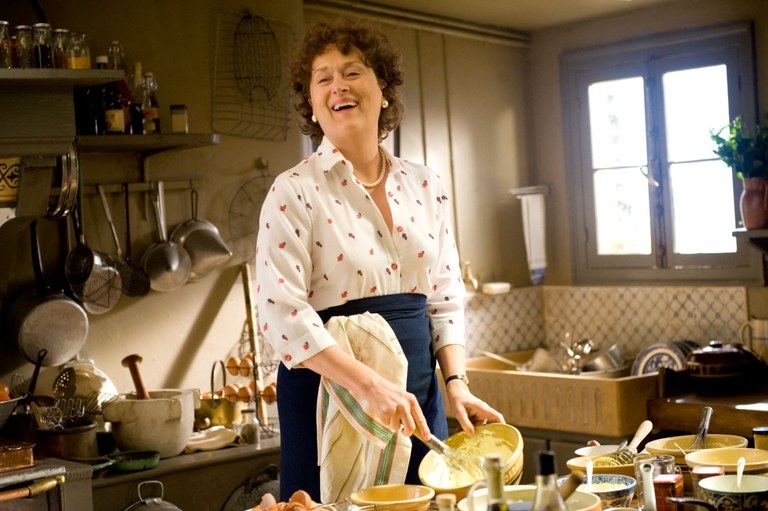 Have you ever fixated on a scene in a movie or in a book where one of the characters is either talking about food, ordering food, making food, or mixing a cocktail? I have. Why I get hooked I have no idea but, after giving it some thought, I think it can be narrowed down to three things: I’m hungry (the most obvious), what they’re making looks easy and, every so often, I’m just up for the challenge when something looks both complicated and good.

It happened again on the weekend as we were listening to an audio book of Debbie Reynolds’ last memoir. She recounted a story related to a recipe. The story was amusing, and the seed of the recipe was planted – and it stayed.

In no particular order, here are a few times that a movie-inspired or celebrity-related recipe lodged itself in my brain after one or multiple viewings until I gave it a try. Sometimes once was enough, but others have actually become a staple. 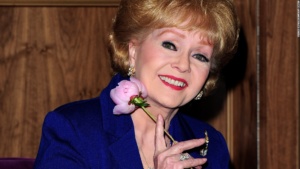 This is the connection between film, stars and food that initially sparked the idea for this article. We were listening to the audio book of Debbie Reynolds’ last memoir, a collection of stories and anecdotes from her years as a performer, to help pass the time on a long drive. The entertaining audio was provided by Judith Ivey and there were stories about Reynolds’ time on Broadway, her MGM years, years on the road, and celebrity tales featuring everyone from Iranian royalty to Eddie Murphy to Elizabeth Taylor to President Nixon. Reynolds also wrote a fair bit about people who had worked for her. One of her assistants had a great recipe for Shepherd’s Pie which she details. The story goes that comedienne Phyllis Diller loved it so much that every time Reynolds went to visit Diller, she had to bring the dish with her. We tried it ourselves a few days after listening to the book – and it’s nice twist on traditional comfort food. (Recipe: Cook six large Yukon Gold potatoes and mash with butter and milk; saute half a green pepper; half a red pepper and one small onion; add 1.5 lbs of chopped sirloin and cook until brown; add a 15 oz. can of creamed corn and a 15 oz. can of tomato sauce. Spread in pan, cover with potatoes and shredded cheddar cheese, and bake for about 30 minutes at 350 degrees.) 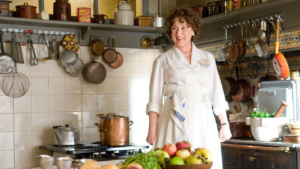 I always knew who Julia Child was, but had never had the urge or desire to attempt any of her recipes until after a first viewing of Nora Ephron’s adaptation of the best-selling book “Julie and Julia”. They just seemed too far out of my reach. Julie and Julia is the true story of a young writer who starts a blog, with the goal of recreating each of Julia Child’s recipes from her seminal cookbook “Mastering the Art of French Cooking” over a period of one year. Of course, I was much more interested in the flashbacks that told the parallel story of Child and her husband during their years in Paris after the war and in the fifties. Meryl Streep gave one of her finest performances as Child and it’s the passion that Streep gave the character that inspired me to want to give Child’s recipes a try, particularly her signature recipe for Boeuf Bourguignon. And we tried it. It’s a daunting task to follow the recipe word for word, but we did it and it worked. One of the best things I’ve ever eaten in my life. Variations were attempted on a second try and it failed so every time since, I’ve followed Child’s recipe. And every time Streep’s wonderful characterization is not far from my mind. 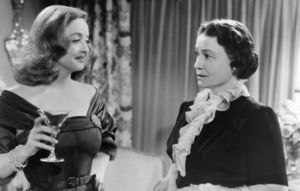 All About Eve has long been one of my favourite films for lots of reasons – the witty, incisive script by Joseph L. Mankiewicz; Bette Davis’ career-best performance; the backstage theatre milieu; and a dazzling supporting cast that included Celeste Holm, George Sanders, Marilyn Monroe and the incomparable Thelma Ritter. But there’s one scene in the film where cocktails are front and centre as a birthday celebration gets underway – they almost become another character. They are serving Gibsons – a quick reference to Holm’s character being a ‘Gibson girl’ tells us as much. A Gibson is a cocktail of gin, dry vermouth, garnished with a pickled onion. The only difference between a Gibson and Martini is the garnish – pickled onions are unique to Gibsons. Olives or a twist of lemon make it a martini. What I do know is that Bette Davis devouring hers – one right after the other – was both enticing and forbidding to young eyes and it stayed with me. Now just hand me an ice-cold version of one of these in something with a long stem and I’m quite happy. 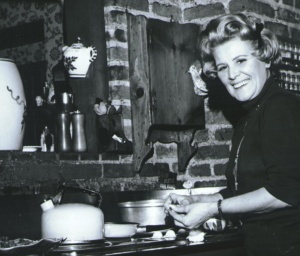 Wait for Your Laugh is wonderful documentary about entertainer Rose Marie, most famous for her Emmy nominated role as Sally Rogers on The Dick Van Dyke Show (1961-66). It detailed Rose Marie’s 90+ years in show business, from her early success as the singing sensation Baby Rose Marie through her years on the road, in Las Vegas, on Broadway, film work, and on television. The documentary used the tagline “The Longest Career in Show Business History” and it was probably true. Unfortunately Rose Marie died in 2017 at 94, soon after the documentary was starting to get some traction on the festival circuit. Doing publicity for the film before she passed away, the performer developed a pretty significant Twitter following as she shared anecdotes, pictures, and even recipes from her past. One of her signature dishes was a straightforward recipe for Linguine with Clams. We tried it one New Year’s Eve. It was a hit and it’s now a staple. Easy, tasty, and carbs be damned.

This is a movie that basically took a germ of an idea from Frances Mayes’ autobiographical book and fleshed it out to a very pretty, romanticized, and somewhat superficial tale about a jilted woman who recovers her identity and self-esteem as she restores a villa in Italy. Diane Lane is wonderful in the lead, with a fun and eclectic cast of supporting characters. The journey of Lane’s character is idealized beyond belief as it plays out in the Tuscan countryside, Rome, and on the seaside, but it’s also incredibly enjoyable and beautiful to watch. And that includes the food. Lane’s character – a writer – also likes to cook and the cooking is part of her recovery. There are scenes with plates of pasta, vegetables, meats, cheeses, and desserts that are just too good to be true. In one scene, she has written Balsamic Roasted Red Pepper Bruschetta on a chalk board as one of menu items for that day. It sounded delicious. We don’t get to see how she made it, but this is where Google is your friend. A quick search and we found the recipe. Yep, delicious!

The Godfather (1972) – Clemenza’s Tomato Sauce with Sausage and Meatballs

The Godfather may be an odd source for culinary inspiration, but the scene in the kitchen after the assassination attempt on Marlon Brando’s Don Corleone is just that. Clemenza (Richard Castellano), one of the many underlings in the Godfather’s empire, is cooking as the other guys sit around the table. Michael (Al Pacino) gets of the phone and Clemenza says: “Come and learn something. You might have to cook for 20 guys some day. You start with a little oil, then fry some garlic. Throw in some tomatoes, tomato paste, fry it and make sure it doesn’t stick. You get it to a boil, you shove in all your sausage and meatballs. Add a little bit of wine. And a little bit of sugar. That’s my trick.” It’s a good trick. A good sauce. A great movie.

Steel Magnolias is a pastel-coloured comedy-drama based on a popular stage play that was a sizable hit when it opened in 1989. There are flaws in the story about the friendship between six women in small Louisiana town over the course of a couple of years, but the flaws aren’t fatal. Both the film and cast are wildly entertaining. Sally Field had one of her best opportunities as the protective mother of Julia Roberts. Field’s scene at her daughter’s grave site is almost primal in its anger and incredibly moving until we find our selves laughing again, thanks to the comic teamwork of Shirley MacLaine and Olympia Dukakis as two of the town’s more eccentric ladies. A lot of the action of Steel Magnolias takes place at the hair salon run by Dolly Parton’s character, along with her assistant Daryl Hannah. And it’s here during the personal chatter and gossip that Parton talks about a very simple dessert – Cuppa Cuppa Cuppa. It combines equal parts fruit cocktail, flour and sugar and is then baked until golden. I remember thinking at the time: how could that possibly work? Well, it didn’t. At least for me. It was just a hard, flat, sticky cake. But I still enjoy the movie.

Postcards from the Edge (1990) – Breakfast Smoothie 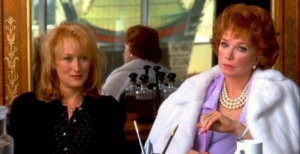 This one is cheating. A breakfast smoothie is a no brainer. But it’s the dramatic flourish and efficiency that Shirley MacLaine brings to this scene in Postcards from the Edge that made me laugh – and the idea of a healthy, easy start to the morning stayed with me. The scene is early morning. MacLaine’s character is up, getting ready for the day by mixing some milk, fruit, and berries into blender. Her daughter, played by Meryl Streep, comes in after being out all night, forgetting she needs the get to the studio that morning for some additional work on her film. The passive aggressive battle these characters have been dancing around throughout the film continues. Streep storms out and MacLaine tops her healthy mixture with a generous amount of vodka before flipping the switch on the blender. Breakfast of Champions? Maybe, but thankfully one I’ve never really felt the need to replicate. Here’s a recipe to try. Vodka optional. 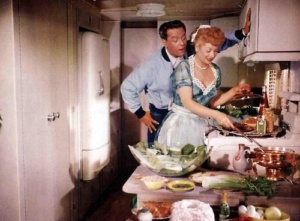 One of the classic scenes in Vincente Minnelli’s film The Long, Long Trailer involves Lucille Ball trying to prepare dinner in the trailer, while its being hauled along the highway by husband Desi Arnaz. This is one of Ball’s best slapstick moments as her character tries to make a Caesar Salad while the trailer bumps her around the kitchen. Beautifully dressed in a stylish mid-fifties dress, Ball does her best to work around the bumps, but to no avail. The lettuce gets tossed out of the bowl, anchovies go flying, eggs fall, flour falls out of the cupboard, utensils and dishes crash the floor, and then so does Lucy – as Desi keeps driving blissfully unaware. It’s a wonderfully choreographed scene, executed perfectly. It also served to introduce me to Caesar Salad and anytime I make it – including the dressing from scratch – I tear (never cut) the lettuce, I use Parmesan cheese, and real anchovies (not a paste). Just like Lucy. 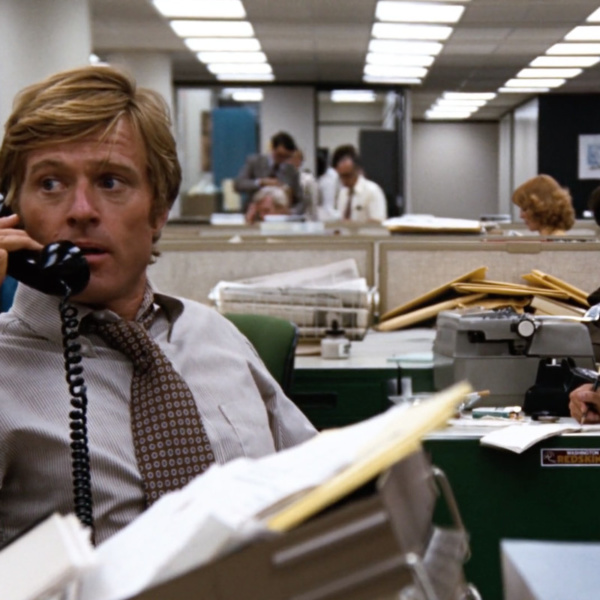