Much like the Cleopatra (1963) filming fiasco and its nearly devastating effect on the financial stability of 20th Century Fox Studios, Hello, Dolly! (1969) nearly accomplished the same thing by practically bankrupting the same studio, not through a lack of planning and over paying its actors as with Cleopatra, but by vastly over spending on lavish set design and costumes.

The story was originally based on the 1842 German play “Einen Jux will er sich machen”, (which translates loosely to “He Will Go on a Spree” or “He’ll Have Himself a Good Time”), by Johann Nestroy, and was adapted twice by Thornton Wilder for American audiences – The  Merchant of Yonkers (1938) and The Matchmaker (1955).  The Matchmaker was filmed in 1958 and starred Shirley Booth, Anthony Perkins, Shirley MacLaine, Paul Ford, and Robert Morse.  In 1964 The Matchmaker was then re-imagined as the Broadway musical Hello, Dolly! with music and lyrics by Jerry Herman, book by Michael Stewart, with Carol Channing in the title role. It was a major hit and ultimately garnered 10 Tony Awards.

In 1965 20th Century Fox Studios successfully negotiated and secured the rights to film Hello, Dolly! for the big screen, however the agreement included a clause insisted upon by Broadway producer David Merrick, fearing the film would detract from his ticket sales. His condition was that the movie could not be released as long as the play was still on Broadway. Filming wrapped in July 1968 with the musical still going strong on stage and showing no signs of slowing down. In 1969, 20th Century Fox paid a reported $1 to $2 million early release fee to satisfy the clause in the contract and the studio was finally able to distribute the movie in December 1969.

Hello Dolly! follows the story of Dolly Levi, a strong-minded matchmaker, fixer and jack of all trades (Barbra Streisand), as she travels to Yonkers, New York, to arrange a match for the penny-pinching “unmarried half-a-millionaire” Horace Vandergelder (Walter Matthau). In doing so she convinces his niece (Joyce Ames), his niece’s fiancé (Tommy Tune), and Horace’s two clerks (Michael Crawford and Danny Lockin) to travel with her to New York City as she manipulates Vandergelder to her will. 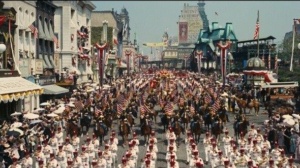 What makes the movie for me are of course the over the top sets and costumes, the size and details of which rival those of Cleopatra. The New York street scene used in the opening number alone cost over $2 million in 1968.  Not only was this set utilized for the intricately timed opening of a day in the life of New York, complete with vast crowds of locals, horses, trolleys and, in the far distance, an elevated train, but it also served as the setting for the massive 14th Street parade scene. The parade, complete with its blocks long choreographed cast of thousands, marching bands, floats, horses, flag carrying cheerleaders and uniformed armed guards, would have been a directors nightmare, but appears to have been seamlessly executed by director Gene Kelly. This set was so enormous it filled most of the Fox Studio lot.

For the authenticity of the trains used in the movie, locomotives and passenger cars were located in Strasburg Pennsylvania. These were used during the opening credits where we see the passenger train en route along the Hudson River, theoretically delivering Dolly to Yonkers. The passenger cars provided by the Strasburg Rail Road are pulled by the 1905 built Pennsylvania Railroad 1223 steam locomotive which presently resides in the Railroad Museum of Pennsylvania in Strasburg. The level of detail in the film was not lost on the antique locomotive and passenger cars. They were restored to full working order specifically for the film and retrofitted to resemble a New York Central & Hudson River train to add a further level of authenticity.

The opening train station scenes were filmed at the Poughkeepsie Metro-North station. This building, constructed in 1918, was designed to be a miniature version of New York City’s Grand Central Station. The historic building retains its 1918 architectural style and was deemed ideal for the use in the movie of its ticket windows and track side platforms to introduce Dolly and her trade in the musical number “Just Leave Everything to Me”.

The “Put on Your Sunday Clothes” number was filmed at the 1892 Garrison Metro-North Railroad station.  Beyond the use of the station, the town of Garrison, New York, was used as Yonkers throughout filming. To ready the town for the shoot, over $500,000 was spent to “beautify” the town.

Improvements to the town included the addition of a gazebo in Waterfront Park, a temporary barbershop façade and the conversion of a Bed and Breakfast (called the Golden Eagle Inn) into Horace Vandergelder’s Feed and Grain Store. The structure remains today and is being used as a commercial building.

For the elaborate church scene, the façade of an idyllic turn-of-the-century colonial church was constructed on the grounds of the United States Military Academy at West Point, New York. The style chosen was based upon an idealized version of a colonial white clapboard structure reminiscent of those built in New England in the nineteenth century, which is fitting for the era. 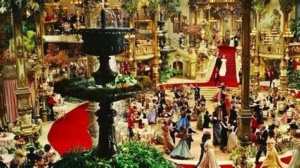 The showstopper of the movie, of course, is the “Hello, Dolly!” number as the title character enters The Harmonia Gardens Restaurant. This number, which extends for some 12 minutes, milks the extensive set for all it is worth. As everything leading up to this number has been larger than life, so too was the set for the title number of the film. It was designed to be beyond over-the-top with a grand staircase flanked by fountains introducing the epic sized two storied space, choreographed servers, and the waiters with Louis Armstrong welcoming back the title character with the iconic song.

Hello, Dolly! grossed $33.2 million in the North American box office following a strong opening, making it one of the top five highest grossing films of 1969-70. After deducting the exhibitor’s cut of $15.2 million, however, the backers of the production lost an estimated $10 million.

To read my article on the sets for Cleopatra (1963) please click here. 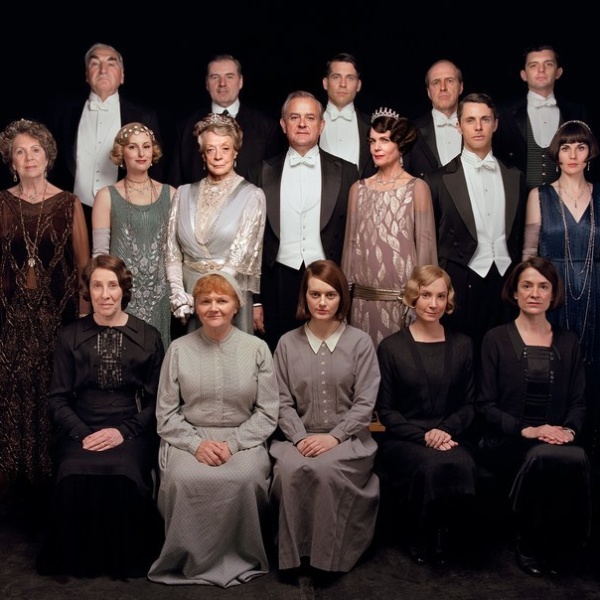